According to its mayor, Medicine Hat is ''a hardworking oil, gas, and agricultural community where you go to work. You don't look for handouts.'' The southwestern Alberta municipality, with its population of about 61,000, is 16 times smaller than Calgary. 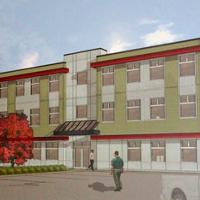 Old-west values run deep. ''We consider ourselves independent. You work hard. I was raised by that motto,'' says Ted Clugston, the city's 46-year-old mayor. ''So if you want a place to live, you pull yourself up by the bootstraps. You go get a job.''

Clugston's father, uncles, and brothers are family physicians. ''They all worked very, very hard to get where they are,'' he says. He learned early that success had much to do with self-sufficiency. Clugston found it hard to loosen his grip on that notion when he became a Medicine Hat city councillor in 2007, serving two terms before he was voted mayor in 2013.

The self-described fiscal conservative's views on what a life's work should yield have changed during his years at city hall. But they used to more closely reflect the values of his neighbours and his peers on city council. Clugston famously rebuffed a provincial proposal that the city of Medicine Hat adopt a ''housing first'' model in 2009, a progressive model for housing that gives homeless people lodgings before working to treat intersecting mental health, addiction, and employment concerns.

''Housing first'' upends conventional wisdom that one must be sober, mentally well, and gainfully employed before landing a place to live. Such thinking has kept many people entrenched in a life of chronic homelessness.

''I used to say things like, 'I don't have granite countertops. Why should they? I've gotta go to work. Why don't they? I'm having a hard time keeping a roof over my head and I'm working, so why should they get one for free?''' Clugston says. But, as he describes it, local folks changed his mind. And Medicine Hat, alongside seven small Alberta communities, adopted the ''housing first'' model in 2009.

Six years later, 875 homeless people in Medicine Hat have landed secure homes in supportive or subsidized housing. Two hundred and eighty of those individuals are children.

Today, Medicine Hat is on the verge of ending homelessness. The municipality embarked on its first homeless count in 2014, when it counted just five individuals sleeping rough on the street. The same count found 30 people staying in one of the city's three emergency shelters, and 29 staying in a second-stage (short-term, rent-geared-to-income) shelter.

''This city is a wealthy city. We have advantages over other municipalities,'' Clugston admits of Medicine Hat. But working seriously to tackle homelessness elsewhere can be done, he maintains. ''What we're saying to other municipalities is that you can do it, too.''

A home in 10 days, guaranteed

If a mental health crisis, a relationship breakup, or job loss lands you on the streets in Vancouver or Victoria, it's a well-documented, painful fact that the road back to stable housing can take months or even years.

Earlier this year, Megaphone reporter Yvonne Robertson wrote about a woman who stayed in a Downtown Eastside homeless shelter for five years before she secured a spot in supportive housing. She's just one of the thousands of people on BC Housing's famously glacial wait list. It's a different story in Medicine Hat.

Clugston explains how ''housing first'' works: if a person becomes homeless in that community, ''within 10 days, we will have some sort of permanent residence for you,'' he says. ''That doesn't mean an emergency shelter. That means someplace to live within 10 days.'' Medicine Hat's Community Housing Society, a multi-disciplinary social services agency, assesses people for subsidized housing based on their needs.

People benefiting from ''housing first'' lodgings also receive treatment for mental health and addictions, plus access to employment resources and income assistance. Depending on individual circumstances, ''housing first'' residents may pay subsidized rents, or rents geared to their income.

''It's different for everybody,'' Clugston says, ''from those who have no income to those who have a fair bit of income but have three or four children.''

'Our local newspaper just doesn't talk about it'

Despite the successes he's seen, Clugston is still struggling to bring the Medicine Hat community on board with its new housing program.

''I'm disappointed in our local print media,'' he says. ''Our local newspaper just doesn't talk about it. There's been more interest outside of our borders in this story than there has been inside... some of our citizens are learning about Medicine Hat because they've been listening to CBC or reading the Huffington Post and Globe and Mail.''

The local citizenry, he says, is slow to embrace the idea. After all, people want to hold onto what they've worked hard to earn in ''the most conservative province in the country,'' as Clugston describes it.

But Clugston remains hopeful that even fiscally conservative taxpayers will turn around if ''they start to recognize we can start to save money by using the 'housing first' program versus just leaving people out on the street.''

Clugston also wishes to raise awareness about the connections between homelessness and mental health. ''If you get cancer, you don't lose your home because your friends and family supports you. They hold fundraisers for you. Lasagna shows up at your front doorstep. People worry about you. But when you have a mental health issue, even your own family will often turn their back on you.''

A symptom of mental health is losing one's home, he says, and to do so because of a mental health crisis is more noticeable in Medicine Hat than in Vancouver.

In Medicine Hat, it's impossible for people to fall through the cracks anonymously. Clugston admits that his city is unique in its size and considerable means; after all, the city owns its own oil and gas companies.

And while there's no silver bullet for ending homelessness -- mental illness and personal crisis will always be a reality, Clugston notes -- moving forward to address what can look like an intractable social problem may be more doable, and more scalable, than it first may seem.

Studies have already sounded alarms about the widespread isolation, loneliness, and disengagement felt by Vancouver citizens. Considering the success Medicine Hat has seen in having its social service agencies band together to take care of the city's most vulnerable, Vancouver's trademark aloofness may have more wide-ranging impacts than the fact that it's difficult to make friends in this city.

''It's so big and so complex and so confusing,'' Clugston says of Vancouver. ''It's hard,'' he says, ''where people can just disappear into the background of a bigger city.''

Medicine Hat Mayor Ted Clugston will be the keynote speaker for the BC Poverty Reduction Coalition's event on ending homelessness in Abbotsford on April 28 at the University of the Fraser Valley, and in Vancouver on April 29 at Vancouver General Hospital's Patzehold Pavilion. For more information, click here.