Another major U.S. health study has found that the hydraulic fracking of unconventional rock formations can liberate and accelerate the release of radon, a highly carcinogenic gas. 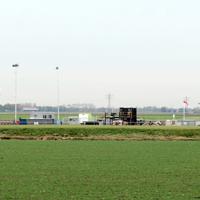 Researchers at Johns Hopkins Bloomberg School of Public Health found that radon levels in U.S. homes in Pennsylvania have been on the rise ever since fracking of the Marcellus shale began in 2004.

The study, published in Environmental Health Perspectives, found that buildings in areas of the most active shale gas mining had significantly higher readings of radon compared to buildings located in areas of low well density and fracking activity.

The study looked at radon levels in more than 700,000 structures between 2004 and 2013. Buildings using well water had 21 per cent higher indoor radon concentrations than homes using municipal water, the study reported. "The release of waterborne radon during showering or washing can contribute to concentrations in buildings," it said.

Radon can be found in well water, natural gas and the atmosphere wherever rock formations or soils contain lots of decaying uranium. Lung cancer caused by radon kills about 3,000 Canadians a year.

The U.S. findings collaborate and strengthen earlier studies by Australian researchers at Southern Cross University as well as recent shale gas research in Colorado. All suggest that the industrial activity of fracking can speed up the release of the odourless and tasteless gas in geologies already rich in uranium.

In 2013, Douglas Tait, Isaac Santos and Damien Maher reported that the radon air levels above the heavily fracked Surat Basin in Queensland, Australia were three times greater than those observed in a non-fracking region. (A separate and earlier study also showed that methane and carbon dioxide levels in the air were three times higher in the mined landscape.)

The Australian researchers suggested that the shallow fracking of coal seams radically changed "the geological structure" of the ground by cracking rock, removing water and lowering pressure in the formation. The fracturing of the ground structure simply created more pathways for radon and other gases to leak up through the soil.

The mechanism for releasing radon into the atmosphere in fracked landscapes may be similar to that caused by earthquakes, added the researchers. Atmospheric levels of radon will typically increase fivefold prior to an earthquake due to stress changes in rock which, in turn, opens new fractures and pathways to the surface.

The technology causes small earthquakes by design, but in recent years, as the industry has used more force to crack rock in ever deeper formations, it has triggered significant earthquake activity. Many of these industry-made quakes could be felt on the surface in Alberta, British Columbia, Ohio and Oklahoma.

'Southern Alberta is a hotspot'

"The disruptive process" of fracking, explain the John Hopkins researchers, not only brings gas to the surface but can liberate "heavy metals and organic and radioactive materials such as radium-226, which decays into radon."

In a press release, Joan A. Casey, lead author in the Hopkins study, explained that "the fracking industry may have changed the geology and created new pathways for radon to rise to the surface. Now there are a lot of potential ways that fracking may be distributing and spreading radon."

Radon liberated by the fracking of more than 7,000 horizontal shale wells in Pennsylvania may dissolve into well water, be released into the air near gas wells, or wander through soil into house foundations. It may also enter homes via cooking stoves and furnaces.

A 2012 Health Canada study found that more than seven per cent of the homes measured in Calgary, Peace River, David Thompson and Aspen regional health districts had dangerous levels of radon (200 becquerels per cubic metre). High levels of radon have also been found in northeast B.C. That geographic region has also witnessed intense shale gas activity over the last decade.

Renata MacQueen, one of the owners of Radon West, an Alberta-based company that measures and fixes radon problems, said fracking can "increase the levels of radon by opening pathways in the soil and it then can move into the home or water." But she adds the danger is pre-existing, due to the high uranium content of many soils and rock formations in Canada such as those in southern Alberta.

"Southern Alberta is a hotspot. Even if you don't live near a well site, you should test your home," said MacQueen.

The John Hopkins study discovered that houses located in suburban townships, where the density of gas wells is the greatest, had a 39 per cent higher concentration of radon than those in the cities.

"We found a statistically significant association between proximity to unconventional natural gas wells drilled in the Marcellus shale and first floor radon concentration in the summer, with a positive, but attenuated association for basement levels, which suggests a pathway through outdoor ambient air, but does not rule out the possibility of radon moving from the basement to the first floor."

Pennsylvania, the home of the U.S. oil boom which began in the 1860s, is one of the most heavily drilled jurisdictions in North America. Industry has punctured the state's geology with nearly a million holes, and then cracked and fracked that geology again during the shale boom.

Given that much of the state's geology is also uranium rich and that well densities are extremely high, it is no surprise that the state has some of the highest indoor radon levels in the U.S.

The connection between radon migration and hydraulic fracking has been documented in other regions, too. A 2013 study by the University of Colorado-Colorado Springs found radon levels at fracking sites so high that they recommended better air monitoring.

"The fracked rock releases radon that was trapped by the tight shale formation which then is able to flow along the lateral sections of the fracked zone and be pumped up the well bore to the surface," concluded the study. "Radon is then released to the atmosphere at the fracking site in levels which may be of some health concern to nearby workers or residents."

An industry textbook on gas migration explains that drilling holes in the ground and then injecting them with water or gases can force gases including radon, carbon dioxide and methane to migrate and find paths to the surface. The more pathways created by the industry, the greater the risk for encountering stray gases: "There is a risk of gas migration into homes, apartment buildings and commercial structures, which have been built in the area of producing oil fields."

In addition, the well-known textbook by Leonid Khilyuk and George Chilingar also notes that seismic activity, such as industrial fracking or earthquakes, can greatly accelerate upward gas migration by creating new faults and fractures, or by increasing the sponginess of the rock formation.

All of the studies called for better baseline data and improved radon monitoring in regions of unconventional drilling and fracking.

"Radon exposure represents a major environmental health risk, and in addition to future studies to understand the impact of drilling on radon levels, there is continuing need for a radon program in Pennsylvania to track and evaluate radon concentrations and to encourage testing and remediation," concluded the John Hopkins study.