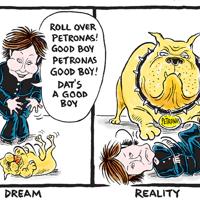 The Nadleh Whut'en First Nation and the Nak'azdli First Nation argue the Crown's 'duty-to-consult' was not met when the province's Environmental Assessment Office approved the 650-kilometre natural gas pipeline on Oct. 24.

"We took every step possible to make our concerns known to B.C. and to work with the province to have our concerns addressed,"  said Chief Martin Louie of the Nadleh Whut'en First Nation.

"Unfortunately, B.C. rushed the project through the environmental assessment process and left us with no other option."

The First Nations examined the 32 conditions and found they did not adequately reflect the recommendations they made in hundreds of pages of submissions to the office, said their lawyer Merle Alexander.

"They're challenging primarily on the basis that there's been a failure to fulfill the duty-to-consult and accommodate the First Nations," said Alexander, a partner at Gowlings in Vancouver.

The Tyee is a fan of iPolitics, a top source for political scuttlebutt in Canada. Bookmark it.

This is the first legal challenge brought by a First Nation against the LNG industry, said Alexander.

There has been an active threat of legal opposition to the Petronas LNG project, but it's currently in a holding pattern, he added.

The First Nations in the GasLink case are particularity concerned about the Environmental Assessment Office's dual role as the regulator carrying out the duty-to-consult and the body that decides whether that duty has been met, said Alexander.

The Supreme Court of Canada's decision to recognize the aboriginal title of the Tsilhqot'in First Nation in June likely will play a role in the Nadleh Whut'en First Nation and the Nak'azdli First Nation's legal arguments, he said.

While First Nation concerns about duty-to-consult policies have been long-standing in the province, the B.C. government's rush to promote a liquified natural gas export industry have put renewed attention on the duty-to-consult.

The province's natural gas is mainly located in the northeast, near the Alberta border, and so a half-dozen pipeline projects have been proposed by industry to carry gas to ports on the Pacific coast, where several liquefaction plants and export terminals have also been proposed.

Aside from the duty-to-consult, the simultaneous pipeline proposals have drained the First Nations' ability to process them and have raised questions about how to assess their impact, said Alexander.

"In the very unlikely circumstance that all the project occurred, their territory would just get sliced into multiple pieces," he said.

The Coastal GasLink project would carry gas from the Montney formation near Dawson Creek, B.C., to the proposed LNG Canada export facility near Kitimat. LNG Canada is owned by a consortium that includes Shell, Korea's KOGAS and PetroChina.

'We are not against development'

The federal government is intensely involved in breaking the impasse between First Nations, the province and the LNG sector. Vancouver lawyer Doug Eyford was commissioned by Ottawa to report on the situation in 2013.

The resulting Eyford report called for a new federal push to fund consultation processes and improve its presence in northern B.C. Natural Resources Canada and Aboriginal Affairs and Northern Development Canada are still actively unveiling new policies to help projects get ahead.

Both the Nadleh Whut'en First Nation and the Nak'azdli First Nation are involved in negotiations over economic benefit packages with TransCanada but these are not considered part of the duty-to-consult process, said Alexander.

"We are not against development," said Chief Fred Sam of the Nak'azdli First Nation in a news release. "Industry is just as frustrated as we are with how B.C. is managing its relationships with First Nations, especially after the Supreme Court's decision in the Tsilhqot'in case this year."