Transparency advocates have criticized a proposal by Conservative MPs to increase fees for access to information requests. 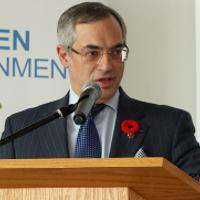 John Hinds of Newspapers Canada, an advocacy group that represents hundreds of newspapers across the country, said the federal government would not have to consider increasing access costs if it made all government information available in the first place.

Hinds' comments were in response to suggestions from Conservative members of parliament to raise access to information fees from $5 to $200 for businesses, including media organizations.

The suggestions were made Thursday after Canada's Information Commissioner Suzanne Legault told a House of Commons committee on Access to Information and Privacy in Ottawa that her department's budget had shrunk, while her workload had dramatically increased.

But Hinds said the access office would not be in this crunch if government information was widely available in the first place.

''If the goal of access to information is to make information available to the public, adding fees is certainly not going to make it better,'' Hinds said. ''Part of the problem is the way they manage freedom of information. If you just make the documents available, you wouldn't need to charge fees.''

''It's highly ironic the system is deteriorating, and all they can talk about is fees,'' he said.

During her presentation to Thursday's committee, Legault said complaints to her office have increased 30 per cent. She said the rising workload is partly to blame for her office's financial problems.

Sean Holman is a journalism professor at Mount Royal University in Calgary and an outspoken critic of Canada's freedom of information infrastructure. Holman said increased access fees should concern anyone who cares about democracy.

''I think it's going to have a suppression affect on journalism,'' Holman said. ''This is nothing more than a watchdog tax that the Tory MPs are proposing. It's a tax, essentially, on accountability.''

In September, Holman helped launched the #cdnfoi hashtag on Twitter for people to share stories of government obfuscation of their freedom of information requests.

''These are documents that have been prepared by taxpayer-funded elected and unelected officials,'' he said. ''It's completely outrageous (to charge).''

Recent public issues that have come to the public's attention courtesy of access-to-information requests include: McDonald's restaurants alleged abuse of the Temporary Foreign Worker Program, the death of a Mexican woman in Canadian Border Services Custody and details about Canadian authorities' attempts to monitor anti-pipeline protests.

Hinds says even if the fee hike goes through, journalists should fight for an exemption of fees for their work on the basis that it is in the public interest.