Treasury Board president Tony Clement unveiled the latest version of his "Open Government Action Plan" earlier this month, continuing a process that has seen some important initiatives to make government data such as statistical information and mapping data publicly available in open formats free from restrictive licenses. 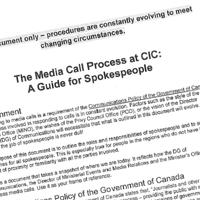 Curse of Alternative Media: 'All Requests Are Not Equal'

Given the promise of "greater transparency and accountability, increased citizen engagement, and driving innovation and economic opportunity," few would criticize the aspirational goals of Canada’s open government efforts, which have centred on three pillars: open data, open information, and open dialogue. Yet scratch the below the surface of new open data sets and public consultations, and it becomes apparent that there is much that open government hides.

True, federal efforts around open data have seen progress in recent years. What started as a few pilot projects with relatively obscure data has grown dramatically, with over 200,000 government data sets now openly available for use without the need for payment or permission. Moreover, the government has addressed concerns with its open government licence, removing some of the initial restrictions that unnecessarily hamstrung early efforts.

Indeed, while the government has invested in making open data sets available, it has failed to provide the necessary resources to the access to information system. The Information Commissioner of Canada has warned that inadequate financing has made it virtually impossible to meet demand and respond to complaints. Regular users of the access to information system invariably encounter long delays, aggressive use of exceptions to redact important information, significant costs, and inconsistent implementation of technology to provide more efficient and cost-effective service.

The efforts on open dialogue and open government suffer from similar shortcomings. The government and its agencies have embarked on public consultations on many issues in recent years: the Canadian Radio-television and Telecommunications Commission asked Canadians for their views on broadcast regulation, the Competition Bureau consulted on advocacy priorities, and House and Senate committees regularly hold hearings on new legislative proposals.

Yet open dialogues and consultations mean little if the outcomes are pre-determined and the public input is largely ignored. This form of consultation is properly characterized as "consultation theatre," where government seeks to claim consultation with no discernible impact on the resulting law or policy.

For example, this week the Senate Committee on Justice and Human Rights wrapped up its hearing on Bill C-13, passing the lawful access/cyberbullying bill with no comments or changes. The hearing included many voices (I appeared in a personal capacity), but Carol Todd, the mother of cyberbullying victim Amanda Todd, was excluded after she expressed concern with the privacy implications of the bill. Similarly, Daniel Therrien, the Privacy Commissioner of Canada appointed earlier this year by the government, advocated changes during his appearance that were ultimately ignored.

Open dialogue and public consultations do not mean that the government simply follows whatever advice is offered up through the process. However, if the consultations or hearings are little more than theatre, claims of open government or open dialogue mean very little.

Open government -- whether open data or dialogue -- offers great promise to provide a more transparent, inclusive and efficient government. Unfortunately, ignoring issues such as access to information and genuine efforts to incorporate public input into policies means that for now open government is most notable for what it hides.