One week before Lucía Vega Jiménez was found hanging in a privately guarded cell at Vancouver airport, she asked the only Spanish-speaking nurse at a provincial prison where she was held for the preceding three weeks for an "unusual" request. 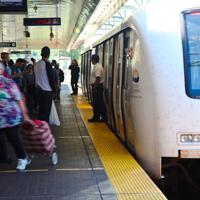 Vega Jiménez asked prison nurse Lilia Hernandez Cazares to document a series of scars across her body that she said were inflicted by an ex-boyfriend back home, a coroner's inquest into the 42-year-old's apparent Dec. 20 suicide heard Tuesday.

Vega Jiménez, an undocumented Mexican detainee, was terrified of her imminent deportation, the nurse testified.

Hernandez Cazares, a licensed practical nurse at Maple Ridge's Alouette Correctional Centre for Women who is also Mexican, observed signs of abuse on multiple parts of Vega Jiménez's body. The nurse believed Vega Jiménez when she said was terrified of being sent home.

"She showed me a few scars -- three to five scars on her body, forehead, the back of her head, her knees -- from an assault from a partner," Hernandez Cazares testified.

Later in her testimony, the nurse added: "From the conversation I had with her, my assessment is that it happened in Mexico and that's why she was afraid of going back."

The nurse examined Vega Jiménez during a Dec. 13 appointment, which the detainee requested because of severe chest pain. Hernandez Cazares concluded the pain was likely caused by anxiety after Vega Jiménez met with her lawyer about her impending deportation.

The undocumented Mexican, who had entered Canada illegally months earlier and was a previous failed refugee claimant, was imprisoned for nearly three weeks in the Alouette Correctional Centre for Women's maximum security ward, which houses its female immigrant detainees alongside convicts with mental health issues and violent offenders.

Vega Jiménez was transferred there after being detained by a Transit Police officer for not paying her SkyTrain ticket on Dec. 1. When the officer couldn't identify her in police databases, he noted her Spanish accent and phoned Canada Border Services Agency (CBSA), according to his Monday testimony.

The nurse told the inquest that Vega Jiménez suffered from a "combination" of fear of what she would face if returned to Mexico, and "emotions" surrounding her removal from Canada.

Nine months before Vega Jiménez's death, the Canadian Red Cross flagged concerns about the mental health condition of immigration detainees in the CBSA's airport holding centre as well as provincial prisons across the country.

The report reviewed a period from January 2012 until March 2013, nine months before Vega Jiménez's apparent suicide.

Among its recommendations: "independent monitoring of all persons held under [the Immigrant and Refugee Protection Act]," and ceasing to house immigrant detainees alongside criminals. The Red Cross praised Alouette correctional centre as a positive example, because it assigned a case manager to its immigration detainees.

However, the Red Cross criticized the airport detention centre, known as the B.C. Immigration Holding Centre (BC IHC), where Vega Jiménez was found hanging in a shower stall.

"In the BC IHC there are no mental health services on hand," states the report. "Instead persons are sent to other facilities to receive care... The lack of regular mental health professionals at this facility is a concern particularly for persons who remain detained in the BC IHC for long periods."

The Red Cross recommended the CBSA "ensure that all immigration detainees, regardless of detention location, have access to appropriate mental health services," including psychological, psychiatric and counselling services.

What exactly Vega Jiménez was so afraid of in Mexico has been the repeated subject of testimony during the week-long inquest run by the B.C. Coroner's Service, which cannot assign blame for her death but can make recommendations to prevent future incidents.

Vega Jiménez told her arresting CBSA inland enforcement officer that her ex-boyfriend in Mexico was abusive. The ex-boyfriend featured in several other witness testimonies. Another CBSA employee, the enforcement case officer who dealt with her deportation process, said that at one point the Mexican consulate in Vancouver alleged Vega Jiménez may have been connected to drug cartels back home, because she was unwilling to provide contact information for any family members in Mexico.

Two other immigration detainees who were incarcerated with Vega Jiménez in Alouette's secure Bravo ward told the inquest that the Mexican woman told them it was not an ex-boyfriend she was afraid of, but an unidentified group of people who would torture and kill her.

According to CBSA case officer Raman Vandher, who handled Vega Jiménez's deportation process and interviewed her a number of times, a consulate staffer told her that Mexican officials were "concerned that she's withholding the family's information either because she's not Mexican or because she's part of a cartel and doesn't want to disclose any information about them to protect them."

The consulate later made arrangements for Vega Jiménez to stay at a transition house in Mexico City upon her deportation, however, and Vandher provided its address to the deportee. Vandher testified that the detainee did not seem particularly distressed or distraught by the news.

Following her examination of Vega Jiménez on Dec. 13, Hernandez Cazares decided that another appointment was needed and scheduled one with the prison's mental health coordinator three days later. But when the time came for that meeting, she told the inquiry, the prison's computer system stated that Vega Jiménez had already been "released" and the appointment was cancelled.

Hernandez Cazares told the inquiry that she learned of Vega Jiménez's death through online social media; a Facebook page for Mexicans in Vancouver fundraised to help the detainee's sister repatriate her remains.

The nurse concluded by expressing her hope that other detainees like Vega Jiménez will receive better mental health support in the future.

"She was not in with us long enough," she said of Vega Jiménez's stay in Alouette. "Especially in cases with immigration, I think a minimum [stay] should be necessary for them to be assessed properly" before they are deported, she said.

"I don't think it's fair for her not to be given the proper chance to present her case... If they are not healthy enough to leave, that goes against all the principles of health care nursing."

On Tuesday, the inquest also heard that Vega Jiménez's death sparked an internal B.C. Corrections review -- one outcome of which is that any mental health concerns raised about detainees under the Immigration and Refugee Protection Act must be flagged as "urgent," alongside several other recommendations. In addition, CBSA officers are now required to undergo mandatory mental health training.

Meanwhile, days before the inquest opened, a CBSA immigration detainee in an Ontario prison is reported to have killed himself, according to Maclean's. Joseph Charles Todd Dunn, a U.S. citizen convicted of shaking a one-year-old to death, died on Sept. 27 after suffering serious injuries five days earlier.