In the past five years, the British Columbia government has let go of 27 per cent of the foresters who watch over the province's billion-dollar forest industry. 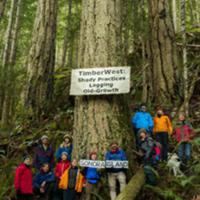 How Many Old Growth Trees Make a Forest?

Instead, it increasingly relies on industry and third-parties to self-report, and critics are raising doubts about whether government still has the capacity to adequately oversee forestry operations.

A report released yesterday by the Professional Employees Association (PEA), which represents government-licensed science officers such as foresters, reveals a trend of cutbacks to professionals in the public service.

Since 2009, the overall number of science officers employed by the government has been reduced by 15 per cent. Cuts are hitting government foresters in particular: five years ago, the province employed 722 foresters in its service, while today that number is 529 -- meaning far less trained eyes on industry, warns the report.

"The provincial government has chipped away, downsized, and reduced licensed science officers to a point where they're simply not able to manage our natural resources," says Scott McCannell, executive director of PEA.

According to the report, when overall numbers trickle down as science officers are laid off, retire or resign, the province fails to replace them, and instead contracts the work to the private sector.

McCannell worries this practice endangers the future of B.C.'s forests and natural resources, and will eventually hurt the province's economy.

"Frankly, we think this situation is reaching a crisis," says McCannell.

Timber is among B.C.'s oldest resources and still ranks as one of the most important to the provincial economy. Yet in recent years -- in the aftermath of the mountain pine beetle's devastating outbreak -- concerns regarding the government's oversight and stewardship of its timber resources have been raised.

In 2012, the B.C. auditor general criticized the Ministry of Forests, Lands and Natural Resource Operations for not taking adequate steps to ensure sustainable forestry operations, in particular raising red flags over inadequate reforestation, deficient inventory management, and reliance on industry or third-parties to self-assess and self-report on activities.

In addition, the government's understanding of areas affected by pests, diseases, wildfires, and other natural disturbances suffered, because government foresters increasingly performed their environmental surveys by aerial imagery instead of visiting the actual grounds.

The auditor concluded that the ministry, with all its efforts, could not possibly have the full picture of timber resources needed to make informed decisions on resource management.

McCannell says today's reality is very different from 15 to 10 years ago, when a high number of government-licensed science officers meant there was a constant presence in all regions, and surveyors were out in the forests on a regular basis. According to McCannell, those days are as good as over.

"Instead, the provincial government is using flawed data to make policies and financial decisions on their resource utilization," he says.

Last year, B.C.'s independent forestry watchdog, the Forest Practices Board, released a special investigation into the ministry's efforts to monitor and control timber companies' compliance with legislation set out under the Forest and Range Practices Act and the Wildfire Act, which aim to ensure sustainable and environmentally sound operations in the province's forests.

The Forest Practices Board found that between 2009 to 2012, the number of inspections of forest and range activities dropped by two-thirds, down from 14,774 to 4,993, at a time when the amount of harvested timber increased by almost one-quarter.

The drop was most likely caused by cuts to the number of natural resource officers employed by the ministry to carry out inspections. In 2009, there were 292 such officers; in 2012 the number was 156.

It was a concerning development, the Board wrote: "This change may signal a shift away from inspections of forest and range activities that pose a high risk of harm to resource values."

The Board told the government to step up and demonstrate that it is carrying out enough inspections to ensure that forestry companies were in compliance with legislation.

If it didn't, the government risked losing the public's confidence in the effectiveness of its oversight, the Board said.

But the public's confidence is already in freefall, contends Dr. Bill Bourgeois. He would know; from 2011 to 2013, Bourgeois coordinated dialogue sessions across the province, which sought to identify and record the concerns and recommendations of experts and community members in order to maintain a sustainable forestry in B.C.

Everywhere Bourgeois went he met worried people of different backgrounds, he says. Whether forest workers, professionals or academics, they all believed that what they saw happening in their forests was not sustainable. Unease was especially high among rural communities with economies dependent in greater part on forest resources.

An esteemed forester, Bourgeois has worked in the industry for 38 years and received industry awards in recognition of his work on sustainable forest management. He initiated one of the first approaches to ecosystem management in the province's industry, which made forestry companies focus more on the environmental impacts of their operations.

For six years, Bourgeois chaired the Forest Science Board under the then-Ministry of Forests and Range, until the Board was disbanded along with the Forest Research Branch in 2009 -- the same year that Bourgeois found himself disillusioned with the government's forestry practises.

Budget cuts, downsizing, and a move to what Bourgeois says was termed "industry-competitiveness," in which activities that, in his eyes, were not consistent with sound forest management were almost encouraged by the government.

"I spent my career trying to promote sustainable forest management, and that was not what the government or the industry were doing," he says.

Bourgeois looks at the new numbers from PEA's report with apprehension. The findings don't surprise him, as he's heard stories about cutbacks and absent monitoring before through conversations with government foresters.

He says the report is an example of the current government's shift towards short-term economics, a turn away from the long-term stewardship that was once the norm in B.C.

"This is going to create problems for the future of our forests," says Bourgeois. "There's no question in my mind that's what it will do."

Awkward for industry to police itself

Chair of the Forest Practice Board Tim Ryan doesn't believe things are that bad.

While the Board's own investigation documented a sharp drop in the number of inspections carried out by the government, Ryan says it's difficult to know whether it's too little or enough, as the responsibility to inspect shifts to third parties or industry itself.

And while government staff may be on the decline, there are checks and balances outside of government to keep industry vigilant, he adds.

"We need to remember that a great number of forest licensees out there report on their own non-compliances when they do occur," says Ryan. If they didn't, they'd be barred from the market and lose revenue, he adds.

McCannell is not sure that's enough. When professionals are performing checks on the very same people that write them their cheques, problems can arise.

"It's silly to assume that they aren't often put in a true conflict of interest," he says.

To Bourgeois, there's nothing wrong with industry paying professionals to perform assessments, but it certainly leaves the professional who's hired in an awkward spot.

He suggests a system where industry pays for assessments, which would be then carried out by the government.

Minister of Forests, Lands and Natural Resource Operations Steve Thompson couldn't comment on the PEA report, as he had not read it by the time of this article's publication.

The minister did explain in an email to The Tyee that the reduction of government-licensed science officers in his ministry was mostly caused by retirement and difficulties finding replacements.

"More people these days are pursuing degrees in natural resource management, as opposed to a discipline that may result in a professional designation," writes the minister, adding that about 25 per cent of ministry's staff is comprised by science officers.

All registered professional foresters -- both government and industry -- who prepare stewardship plans are accountable for their work and held to a code of ethics, writes the minister.

In Thomson's opinion, inspections are adequately carried out by the ministry's natural resource officers and the Forest Practices Board.

Ryan concedes that there's always room for improvement, but between the ministry's officers and the Forest Practices Board, inspectors have a good chance of catching potential wrongdoers -- as long as an appropriate level of monitoring is maintained.

But Bourgeois doesn't believe the ministry's current action on forestry inspections is adequate.

"The forest is an asset to the province, and if we don't invest in that asset it degrades, and we are kept from capitalizing fully on it," he says. Trying to manage a forest as a short-term resource makes no sense to him.

"Unless you want to use it as a cash cow. Then it makes perfect sense," he says.