The federal NDP has written a letter to Fisheries and Oceans Minister Gail Shea expressing concerns about the culling of seven world famous libraries and seeks clarification on what happened to their collections. 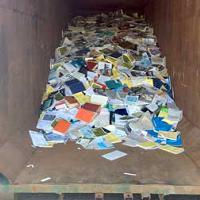 "Recent media reports have indicated that valuable and irreplaceable research was permanently destroyed, including being thrown into the dumpster," reads the letter by Kennedy Stewart (MP Burnaby-Douglas) and Robert Chisholm (Dartmouth-Cole Harbour), which can be viewed here.

"These allegations of effective 'book burning' are very disturbing to Canadians."

The letter asks the minister to explain what happened to grey literature or thousands of small reports published privately that contained vital scientific and baseline information.

The letter asks for a detailed account of how the libraries were culled -- "specifically why wasn't a process in place to secure a new home for all research material prior to the closure of the libraries at either universities or other public institutes?"

"As well, what exact percentage of the materials at the seven libraries in question were released or discarded?"

The government says it closed seven Department of Fisheries and Oceans libraries to save just over $400,000 a year and that the public wasn't using them. But the libraries were primarily designed to serve the needs of federal scientists doing research in the public interest.

Bush did something similar

After the U.S. administration of George Bush Jr. attempted to close a half dozen environmental science libraries at the U.S. Environmental Protection Agency, the American Library Association and scientists cried foul and contested the move.

Like the Harper government, the Bush Administration claimed that it was closing environmental libraries to save money and that it was dispersing, disposing of, and digitizing library materials in a rational manner.

But that's not what a subsequent investigation by the Government Accountability Office, a government watchdog, found. The agency even declared the closures "unjustified"

A 2008 GOA report noted that the "EPA's primary rationale for reorganizing its library network was to generate cost savings by creating a more coordinated library network and increasing the electronic delivery of library services."

Moreover, "EPA officials stated that they needed to act quickly to reorganize the library network in response to a proposed fiscal year 2007 funding reduction. EPA did not develop procedures to inform staff and the public on the final configuration of the library network, and EPA libraries varied considerably and were limited in the extent to which they communicated with and solicited views from stakeholders before and during the reorganization effort."

In the end, the U.S. government was forced to reopen the closed libraries.

Critics contend that the move to shutter and consolidate libraries containing material on the nation's heritage is really about reducing the scope and role of public services for ideological reasons.

Prime Minister Stephen Harper, a right-wing economist, has frequently argued that the best government offers a minimum of services to its people and lets the marketplace and corporations provide everything else.

The Canadian Library Association has, like the NDP, expressed concerns about the way nearly two dozen federal libraries serving a variety of departments from Natural Resources to Environment Canada have been culled, closed or consolidated in the last year.

"Our greatest concern is whether there was consultation with the communities these libraries served, as well as the impact on service and access to content," said Marie DeYoung, president of the CLA and a librarian at Saint Mary's University in Halifax.