It's been about two decades since Calvin and his wife Sarah started earning an income as landlords. They live in Richmond and rent out a four-unit Burnaby duplex, renting the two-bedroom, 850-square-foot units for $875 a month downstairs and $1,000 a month upstairs. "I would say each unit can be rented for $25 to $50 higher, but I prefer to charge good tenants a little less than market rent," Calvin says. 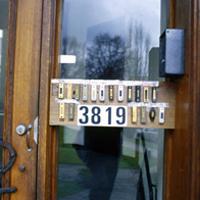 'Market Rental' Is No Synonym for 'Affordable'

His tenants' quality of life and safety are important to him, he adds. He's spent many weekends maintaining the 60-year-old building. "We spent a lot of money updating it so it looks and functions newer than [its age]. In fact, parts of it are nicer than what I have in my own home," he says. Both a carbon monoxide detector and smoke detector can be found in each suite, something most landlords don't provide, he notes. "I try to provide decent living units where I personally wouldn't mind living myself. I also try to put myself in the tenants' shoes."

Calvin works full-time as an accountant. He never aspired nor expected to become a landlord. But Sarah had purchased the building before they were married. "She lived at home with her family until she was in her 30s and spent her salary on mortgage payment for the rental property," he explains. "She got into it because other family members invested in real estate and she was regularly reminded that real estate is a good investment versus, say, stocks."

Calvin sees landlording as one way to diversify his investment portfolio. But after going through three arbitrations at B.C.'s Residential Tenancy Branch (RTB) over the last six years, his enthusiasm for landlording is wearing thin. He's still embroiled in his most recent dispute with the RTB. Not wanting to prejudice his case with the arbitrators, he asked The Tyee Solutions Society not to publish his real name.

"I am amazed," he says, "at how biased the DROs [the dispute-resolution officers who run landlord-tenant hearings] were in favour of the tenants. With all the hassles I have been experiencing, I have also been thinking of selling and getting out [of landlording] entirely. The hassles are due to unreasonable and irrational tenants, as well as the RTB."

He knows there would be consequences to selling the building at this stage. He gets along well with three of the four tenant households in the duplex. He thinks they'll be "sad" if he quits his job as a landlord.

One reason is what he knows is likely to happen to the building if he sells it: "If I sell out, a developer may buy it and build a new duplex on it to sell.

"If that happens, there goes four units of affordable housing."

Three fixes for an unloved agency

B.C.'s rental housing landscape can be unforgiving to renters. But those providing housing to rent in the private market don't seem to have it much easier.

Calvin and Sarah are small-time landlords whose property is not part of a professional property management corporation, and whose professional and personal lives go beyond the Burnaby duplex. But when they've had trouble with tenants, and taken disputes to the RTB, Calvin doesn't feel he's received the service he should have from the agency in charge of administering provincial residential tenancy legislation.

"By no means am I asking the RTB to be biased in favour of landlords," he says. "I am just hoping one day the playing field will be leveled." Perhaps unwittingly echoing a group of exhausted West End tenants who struggled for years with the RTB, Calvin calls for more balance, professionalism and transparency in B.C.'s landlord-tenant arbitration process.

According to the advocacy agency Landlord BC, the RTB convenes some 22,000 dispute hearings each year. Calvin offers three unfussy solutions for improving them:

1. Commission an independent survey of client satisfaction with RTB staff, and work to improve whatever the survey results indicate needs improving.

2. Require an independent review of an arbitrator's decision upon a landlord or tenant's request.

3. Move towards a more accessible appeals process, after decisions are handed down.

The last idea addresses a quirk of the system: as it stands now, any appeal of an arbitrator's decision -- whether by a landlord or tenant -- cannot be made at the RTB. It must apply for judicial review at the BC Supreme Court: a prohibitively expensive and time-consuming process, even for most landlords.

He understands the system may be challenged for resources. "I have no doubt the RTB is under-funded," he says, "as suggested by 'On Shaky Ground,'" referring to a critical report by tenant advocates earlier this year that called for a major overhaul of B.C.'s system. "However, with the funding they do get, I am sure they can do a better job."

'Only so much a landlord can take'

But raising the standards of the residential tenancy system includes landlords, says Amy Spencer, spokesperson for Landlord BC, recently-renamed from the BC Apartment Owners and Managers Association.

The group represents some 3,500 landlords in B.C., a small fraction of the untold real number of property owners renting suites to tenants across the province. It's an advocacy organization aimed at professionalizing the landlord and property management industry.

"We offer education for landlords. We offer networking opportunities. We exist to make a landlord's life easier, to make it easier for them to do business," Spencer says.

"We are also looking for more balance in landlord-tenant relations," Spencer says, "thinking about landlords and tenants as a community rather than separate fighting entities."

Her membership includes large firms like Hollyburn Properties and Concert Properties, but 80 to 90 per cent are more like Calvin and Sarah, owners of 10 or fewer rental units.

And Spencer says most landlords aren't looking to make life miserable for their tenants. "In the media, probably about five years ago, you were starting to see a lot of words like 'renovictions' and 'slumlords,'" she acknowledges. "That small percentage of people were really tarnishing the industry as a whole. We want to talk about all the good landlords that are out there, not just the bad ones. And our ideal hope would be to not have anyone do untoward business practices, not have anyone be called a slumlord."

Spencer spends her weekdays in the office fielding calls from landlords like Calvin and Sarah across the province. They complain about the Residential Tenancy Act, or about the decision from a hearing at the RTB. She will hear them and direct them back to the RTB, to investigate what happened, but she knows those powers -- and her own -- are limited.

"This is the interesting part: they don't have the power to change a decision," she says. "So the onus is on the landlord, then, to take it to judicial review. It's kind of an onerous process, I would say, for landlords, especially those who maybe only have a secondary suite, basement suite or laneway house, something like that."

Absent a more supportive RTB, the landlord group is planning a number of initiatives next year to provide its members and other landlords in B.C. with more resources and some support. It's launching an online education initiative called the Connected Landlord, and considering bringing Ontario's Certified Rental Building program, which streamlines practice standards, to B.C. The organization is also considering providing a mediation service to its member landlords and their tenants in efforts to help them avoid taking their case to the RTB, thus reducing the RTB's already-crowded caseload.*

Such professional community supports are crucial for improving the occupation overall, Spencer says. Many landlords work in isolation and under stress, many trying to stretch the annual allowable rent increases in B.C. (the price of inflation plus two per cent) to cover routine maintenance costs. "There's only so much a landlord can take," Spencer says.

Scott Ullrich has worked in rental housing property management for 30 years. He's now the CEO of Gateway Property Management, a 50-year-old property management corporation with properties under contract in B.C., Alberta, and Quebec. Gateway works as an agent for landlords (the company does not own the buildings it operates) and has 16,000 residential rental units under its belt.

Ullrich has seen great change in the landlording industry over his decades in the business. "When we first started, property managers and landlords were basically like custodians. Pretty simple, pretty basic. They owned or managed a unit, they found a tenant, put the tenant in, collected the rent, paid the expenses," he says. "It wasn't, in a lot of cases, even considered a profession."

Gateway is now part of Landlord BC and has worked, like other firms, to professionalize and legitimize the landlord industry, Ullrich says. But he still sees educational gaps among property managers -- housing literacy, it seems, is something that could use improvement among both tenants and landlords.

What Ullrich, and Landlord BC's thousands of property managers and landlords in B.C., as well as Calvin and Sarah, have in common, is that they are renting homes on the private market in order to generate income -- to turn a profit.

People forget that, they say.

"What I wish more people knew is the difference between providing market housing and affordable housing," Spencer says. "We have to start making that distinction and think about what we can do to help people who can't afford market housing."

Adds Ullrich: "Landlords have to eat, too. There's got to be some sort of profit in it for them. I think what has to happen is thinking outside of the box. How else can you make it work?"