Vancouver City Councillor Geoff Meggs' article on rental affordability in The Tyee is consistent with the views he and other members of city council have put forward recently. But we contend that for Meggs' most important assertion and assumption -- that increases in market rental units increase affordability -- there is simply no evidence. 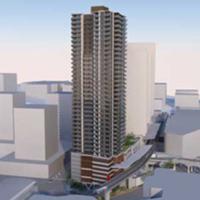 More Lower Mainland Rental Housing, but For Whom?

Here's the relevant section from Councillor Meggs' article: "More than 1,000 units were approved in Vancouver in 2012 alone, a four- or five-fold increase over the annual average in the previous three years. They are expected to rent at a range of market rates equivalent to about 30 per cent of the household income of families in the target income group." The target income group he's talking about is family incomes of $20,000 to $86,000 per year.

The generally accepted benchmark for affordability is 30 per cent of family income at all income levels. That comes from Canada Mortgage and Housing Corporation, not some left-wing idealist.

Look at a typical family

If you need to survive on a near minimum-wage service job, as many thousands of people in Vancouver do, you should be able to find a home in the city where you work. What can the those who clean and make up the rooms in our downtown hotels and their families afford? Where are the two- and three-bedroom units they need at rates they can afford?

Still, council argues its affordable rental housing strategy is aimed at people like this and has implemented programs (STIR and Rental 100) meant to increase affordability by subsidizing private developers.

But those units are not affordable for families even at median income, let alone the many, many renters whose incomes fall far below the median. Based on 2006 census numbers, renter households in the City of Vancouver had a median household income of $34,532.

To make a market apartment affordable, a median-income family would have to pay no more than $950-a-month in rent -- that's 30 per cent.

Significantly, the experience with market rentals approved by council over the last few years is that once the buildings are completed, the actual rents are significantly higher than they were projected to be during the planning process.

For example, 1142 Granville Street, a STIR project, was projected to have rents of $960 per month for a 400-square-foot studio apartment. That would have been bad enough. But the rent ended up an astounding $1495 per month.

Who are subsidized apartments for?

Under the City's new Rental 100 incentive program, private developers who build apartments for long-term rentals are exempted from the standard fees -- that is, they are subsidized by the people of Vancouver. Frances Bula's article in The Globe and Mail on Dec. 3 confirms: "The average rents defined in the report, which goes to council on Wednesday, are a maximum of $1,443 a month for a new studio and up to $2,743 for a new three-bedroom apartment."

So it's fair to ask: who are publicly subsidized market rental units providing affordability for? Are they intended for anyone other than single professional people and relatively privileged families?

City Councillor Raymond Louie admits the new, subsidized apartments are not, in fact, affordable. "Despite the fact that it's initially expensive, we expect they'll become more affordable," he told The Globe and Mail. That's because, according to Louie, they will become cheaper over the next 40 to 50 years. So he "expect[s]" affordable rentals in 2050 or 2060. But the housing affordability crisis is now!

Council has flirted with two dangerous assumptions over the last couple of years. First, it is redefining "affordability" to mean that if somebody, anybody, can afford a market rental apartment, then it's "affordable". Meggs' and Louie's colleague, Councillor Kerry Jang, was recently quoted in the Georgia Straight making this argument. It's a position developers have always put forward, and it's ridiculous.

When the many, not the few, can pay

The measure of rental affordability in Vancouver, or in any city, can only be based on the needs of a wide range of residents -- working class and middle class families, young people, seniors, homeless people, disabled people. All of them need adequate housing at rents of 30 per cent of their family incomes or less. That's affordability.

We reject the suggestion that "market rental" is a synonym for "affordable." Moreover, market rental is not social housing, even though developers are beginning to make that claim as well.

Second, developers and city councillors want to focus the debate on what they call "more affordable" market rentals. Yes, of course $2,400 a month is less than $2,500 a month. That certainly doesn't make it affordable.

It's these assumptions, among others, that keep the city's housing strategy tied to the needs and demands of private developers, rather than the needs of all of us for homes we can afford.

We plead guilty to the charge that we believe the private market is the cause of the problem and not the solution. The solution to the crisis of affordable housing in Vancouver -- as it is in major cities around the world -- is not to be found in the private market, but in a range of non-market tools and strategies, among them traditional "social housing."