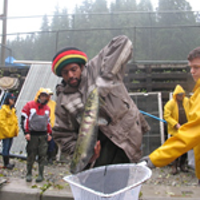 Inside, MacVicar shows me the remains of a deer; a great teaching tool, he says, before explaining the deer's role in the forest ecosystem.

MacVicar has been a science teacher for more than 30 years. In 1976, he and his teaching partner Ruth Foster started an environmental school club in Centennial High School in Coquitlam. After setting up the club, they realized they needed a field location. "A place where students could experience, learn about, and maybe restore nature," says Foster.

The field location they chose for their club was Mossom Creek, a stream that runs through the city park and the Ioco Lands; lands energy giant Imperial Oil has owned for almost 100 years.

In April, Imperial Oil put the Ioco Lands up for sale and invited high-scale developers to bid on them. Worried about the negative effects development could have, not only on the stream but also in the whole watershed, Foster and MacVicar decided to ask Imperial Oil to give the environmentally sensitive part of the Ioco Lands as a gift. An eco-gift.

Imperial Oil hasn't made a decision yet. Until then, the future of Mossom Creek remains uncertain.

Foster recalls that when they started the project, there were no salmon in Mossom Creek. So, she and MacVicar, with the support of Fisheries and Oceans Canada and the help of volunteers, built a hatchery and brought eggs from other systems to restore the salmon run.

Today, Foster estimates that the hatchery raises around 100,000 chum salmon, and between 4,000 and 5,000 coho salmon every year. The return of the salmon has, according to MacVicar and Foster, increased the biodiversity of the park. Wildlife living in the forest includes two provincially protected species of frog, bobcats, black bears, deers, cougars, wolverines, owls and woodpeckers.

MacVicar and Foster say that of the 282 acres of the Ioco Lands, the 82 that are inside Port Moody are the most environmentally sensitive.

"Studies in urban watersheds says that when you start to urbanize, the streams become dry in the summer, and the quantity of water in the stream disappears, and with the quantity all sorts of species that depend on water disappear," said MacVicar.

According to them, giving the lands as an eco-gift to the city is a win-win situation: Imperial Oil would receive significant tax savings on the land they decide to donate, and the city would secure protection of the park.

Two weeks ago MacVicar and Foster met with representatives from Imperial Oil to talk about their proposal.

Foster recalls that when they asked if Imperial Oil would consider the proposal, the only promise from the representatives was to talk it over with their "tax people."

When asked if they felt encouraged by the meeting, Foster looked at MacVicar and asked him how he felt. MacVicar, after keeping silent for a second, just said: "I think so."

But MacVicar said he wasn't happy when the representatives told them that the proposal would be evaluated on financial terms.

"I sort of thought that if I'd owned that company and if [I've] taken $30 billion out of Canadian pockets selling gas, that [I] might want to give something back, [I] might want some goodwill," he said. "We're not really pushing a company to bankruptcy or anything like that."

Foster is also optimistic. She says the relationship between Imperial Oil and the hatchery has usually been positive.

She points out that the road to the hatchery runs through the corporation's land, and they allow them to cross it. She also remembers that, during the time the hatchery was being built, Imperial Oil helped with money, construction materials, and even labour.

"The refinery has helped to keep salmon here and keep this educational facility open," she said.

Foster even reminded Imperial Oil of the relationship the hatchery and the corporation have had.

She went through the binders where she keeps every newspaper article mentioning the hatchery since it was built, and looked for stories that featured both Mossom Creek and Imperial Oil. She ended up giving the corporation over 50 pages worth of articles.

"Because they've probably have forgotten how they've helped us over the years, we've shared with them some of the history," she said.

When contacted by the Tyee, a media representative from Imperial Oil said that they are well aware not only of the long relationship they've had with the hatchery, but also of the significance of the project.

The corporation claims that they've specifically addressed the importance of Mossom Creek in the marketing material they're using to advertise the lands.

Regarding the proposal, the Imperial Oil says that it's reviewing the request and that they'll respond when that review is completed.

Despite the usual good spirit between the hatchery and Imperial Oil, the relationship has also had its drawbacks.

In 1998, MacVicar and Foster signed a proposal requesting the corporation to "set aside a portion of [its] property, in perpetuity, as a protected area." That request was essentially the same: they were asking the lands to create an environmental education forest for the school district.

A year after the proposal, they were still waiting for a response from Imperial Oil.

"They ignored the proposal. They did not respond to it," said Foster. "We had to ask them if they even got the proposal, and they said 'yes.' They weren't interested in it."

Foster refuses to believe that that experience may indicate in any way what the answer from Imperial Oil will be this time around.

"That was a long time ago, that was different people," she said.

MacVicar and Foster say that although they have thought about what they will do if Imperial Oil decides to sell the lands, they haven't yet developed a plan.

"Personally, I don't think we would like to make it easy for anybody to develop this land," said MacVicar. "They would have to follow the most strengthened environmental regulations and the most observed regulations, the most challenged."

Regardless of Imperial Oil's decision, MacVicar and Foster are ready to keep fighting for the creek. They believe that the need for a place where kids can interact freely with the environment is greater than it was when they started the project almost 40 years ago.

"You can see the loss of creeks along the Lower Mainland, all the salmon creeks that just disappeared with urbanization," said MacVicar. "Here, kids can come out after school, they can work in a creek with gravel and fish, they can change things, and they can see the world become a better place because of their work."