For a month now, international furniture giant Ikea has been embroiled in a tough labour dispute with over 350 unionized employees at its Richmond, B.C., outlet. The $100-million store has operated on reduced hours, with a skeleton staff of managers and some Teamster workers who have broken with their union to cross picket lines. 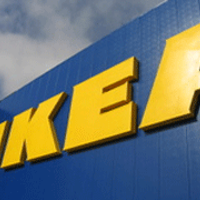 A B.C. Labour Relations Board ruling on June 5 ordered the company to "cease and desist" from using some non-unionized workers who've helped keep the store open during the dispute. A few of those workers were brought in from outside B.C.

As well, union members who crossed the picket line at the embattled store will face an internal Teamster "trial" this week that could see them expelled from union membership.

The dispute, which Ikea spokeswoman Madeleine Lownborg-Frick described to The Tyee as a strike, but which Teamster local business agent Anita Dawson insists is a lockout, flared up on May 13.

After the store's hundreds of unionized employees rejected the company's contract offer by an 84 per cent margin in a Labour Relations Board-conducted vote, Ikea management shut down the store for an hour. It then re-opened and invited workers willing to break ranks with the union back into the store.

"Not all our co-workers voted for a strike mandate," Ikea's Lowenborg-Frick said, referring to the union workers.

"In order to provide those co-workers, and any others who changed their mind, with the opportunity to return to work and minimize any pay or benefit disruptions, we reacted with a brief, partial store closure on Monday, May 13, 2013 at 8:30 - 9:30 a.m. Strategically, this meant that co-workers could return to work once the store re-opened," she said.

The May 13 closure provided an opportunity for "people who wanted to come to work and make money" to do so, she said. Lowenborg-Frick insisted that the single hour on that day was the only period of lockout, and that the more than 84 per cent of the workforce who remained outside on the picket line were striking, not laid off.

But the union's Dawson objects to calling the dispute a strike.

"The company wants us to come back under the terms of their new contract offer. We are willing to resume work under the terms of our old contract with only a few small changes while we bargain, but not under the new and reduced terms of Ikea's offer," she said. "They are trying to bully our members back to work under worse conditions, and it isn't going to succeed."

Some of that "bullying," Dawson said, includes what she called "backwards bargaining," the company's announcement that the longer the dispute continues, the more of its offer will be taken off the table. Already on June 3 some elements of the company's offer were removed, including a $500 signing bonus for employees.

On June 8, absent a settlement, the company plans to implement a maximum yearly cap for prescriptions and reduce paramedical coverage, such as currently unlimited payment for chiropractic treatments. A third round of scheduled reductions in the contract offer will kick in on June 13.

"Ikea is offering a reduced contract, including a tiered wage system which will see some existing employees getting reduced wages and benefits. The company is also trying to force concessions in hours of work, allowances, benefits and work classifications on its workers, and that's simply not on," Dawson said.

Lowenborg-Frick said the staged reductions in her company's bargaining offers were designed to show workers that the original offer was the best they would get.

She agreed that the new offer did include some rollbacks from the last contract, but said the reductions were necessary. Even with the cuts, she told The Tyee, Ikea would provide wages and benefits "well above the industry standards." 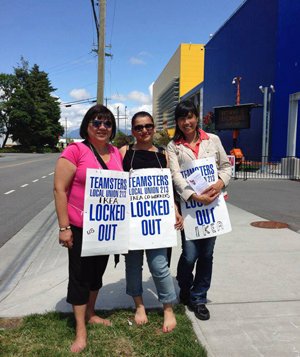 Several unionized employees at the Richmond Ikea have been picketing for a month. Photo via Teamster Local 213 Facebook page.

The Teamster spokeswoman said that Ikea's "bullying" had included multiple harassing calls to her members. The company, she said, is showing "outrageous behaviour by an employer which is determined to underpay its employees and force its will on the union."

Not so, says Ikea's Lowenborg-Frick.

"We want a fair collective agreement," she said.

"We care tremendously for our employees and we offer them a great working environment and lots of opportunities for advancement. Our commitment to our co-workers is unwavering."

Ikea's wins in a tough economy

The Richmond store, which first opened in 1976, is one of two unionized Ikeas in Canada, out of 12 across the country. The other organized store is in Montreal.

In a recent Globe and Mail article, Ikea CEO Mikael Ohlsson said that Canada is one of the retailer's strongest markets, with about $1.4 billion in sales, up seven per cent from a year earlier at stores open a year or more.

The tough economy helps discounters like IKEA take earnings away from rivals, he reportedly said, and the company has set ambitious global growth plans, targeting a doubling of overall revenue by 2020 from the current $37 billion.

Ikea has made founder Ingvar Kamprad, 87, the world's fifth-richest man, with an estimated worth of $52.7 billion, according to UPI.com.

If accepted by unionized employees, the terms of Ikea's proposed new contract in Richmond, according to the company, will see 58 per cent of workers make over $18/hour, 25 per cent over $21/hour and five per cent make the lowest rate, $10.79/hour. The spokeswoman did not specify what other employees would receive.

The union's Dawson said that any assessment of those hourly wages should account for the fact that just 70 of the over 350 workers are full time, and another 40 are guaranteed 30 hours a week.

"I don't know how they have come up with those numbers, because they do not match with ours. We're going to keep the pressure on," Dawson said. "Solidarity on the picket line is fantastic and we have been getting support from other unions and from the community. We just want to get back to the table and negotiate."