Describing the BC New Democrats' sobering election defeat as "impossibly disappointing" and "searing," Adrian Dix has vowed to remain leader of the party despite accepting "full responsibility" for the May 14 results which saw the NDP drop to 33 seats compared to the Liberals' 50. 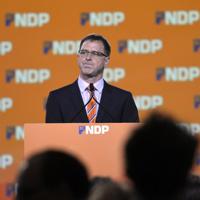 Should Dix Step Down?

The re-elected Vancouver-Kingsway MLA blamed the results on low voter turnout amongst its supporters, as well a failure to communicate the party's message to voters.

Dix's fortunes are now in the hands of the NDP membership and caucus, he told reporters at his first post-election press conference today, announcing the party is launching an "unflinching" review process which Dix insisted will "spare nothing and no one, least of all me" in pondering the crushing loss.

"Disappointment doesn't begin to describe how that feels," Dix told reporters. "We have to learn the lessons of what was a particularly problematic and devastating defeat on election night.

"We did not do a good job prosecuting the case against the government based on their record, and we did not make a clear enough case to British Columbians about what the consequences would be of re-electing the Liberals."

'I don't blame the Greens': Dix

But though Dix admitted that his campaign's job skills and economic growth message "didn't resonate" across the province, he downplayed suggestions that the Green Party of B.C. may have also been to blame for splitting the progressive vote. The third party picked up eight per cent of the popular vote -- and its first provincial seat in Canada -- while the Liberals beat the NDP by less than five per cent.

"I don't blame the Greens one bit for our defeat," Dix told The Tyee after the press conference. "We didn't get enough votes.

"A significant part of our electorate did not show up at the polls," he added.

Dix said that three key factors were to blame in the results: a failure to tackle the Liberal record head-on; inability to communicate his platform to voters; and his April 22 announcement opposing the proposed Kinder Morgan oil sands pipeline mid-campaign -- spun by the Liberals as a "flip-flop" from his earlier wait-and-see stance.

But returned to the Legislature as leader of the Official Opposition, Dix insisted that when it comes to the "divisive" issues around bitumen pipelines, it was simply how he announced his position on April 22, Earth Day -- not the plank itself -- that hurt his party.

"I hold to the policy I set out with respect to this pipeline," Dix maintained. "But plainly I didn't handle the issue very well.

"It was important to be clear before the election that this is going to be a very divisive process for this community and in B.C. with respect to Kinder Morgan, just as it has been with Enbridge Northern Gateway.... I was looking to the long-term in making that decision -- the long-term interests of British Columbians. The challenge in politics is, if you're going to make a substantive policy decision, to have a debate about the policy and not about the process."

Positive politics not to blame

Dix said he alone was responsible for the campaign strategies that led to his party's dismal rankings.

Asked if he would resign as party leader in the wake of the loss, Dix vowed to remain at the helm -- at least in the "short-term" -- to ensure the electoral lessons are learned.

"Obviously all these questions will be on the table, and party members and caucus members will have their voices heard," Dix said when asked about his continued leadership of the party. "We need to take an unflinching look at our strengths and weaknesses, and what we need to do to improve.... I will put the public interest and the long-term success of the BC NDP ahead of any personal ambitions."

But amidst some supporters' complaints that the NDP should have struck back at a constant barrage of Liberal attack ads -- including a devastating television spot depicting Dix as a creaky, untrustworthy weather vane -- the leader refused to denounce his avowedly "positive" strategy.

"I don't believe that last week's results are the end of positive politics in B.C.," Dix said. "The answer to the Liberals' populist right-wing playbook is not to simply adopt it, but voters expect Opposition leaders in particular to hold sitting Premiers accountable for their records.

"You have to define the problem before you can persuade people of the solution.... We failed to demonstrate a clear choice between our vision for the economy, the environment and a more caring society than Premier Clark, her record, her plan and her team."