The British Columbia New Democratic Party should plan on holding a leadership contest in two or three years and use that momentum to build towards the 2017 election, said former MLA and strategist David Schreck. 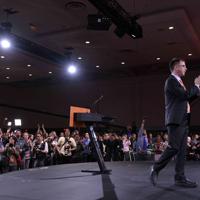 What Happened to the New Democrats?

"No one can go into an election with the expectations that were held, driven by large gaps in the polls that were maintained up until election day, and come out with hugely disappointing results and expect the chance to do it again," said Schreck.

That's a view quietly shared by many both inside and outside the party, but not universally, and so far not publicly acknowledged by leader Adrian Dix or people around him.

"What I'm going to do is continue on and meet the caucus and meet the party in the coming days and we're going to draw conclusions about where we go from here," Dix said on election night when asked if he would continue as leader.

"I'm going to respectfully meet the caucus," he said. "We're a democratic party and I have a democratic approach to leadership, so I'm not going to draw conclusions."

Despite having dropped in its share of the popular vote compared to 2009, attracting fewer total voters and losing seats while running against an unpopular premier, Dix looked on the bright side. "The election overall was fairly close. We always knew it was going to be and it was," he said.

"These are consecutive close elections," he said. "We'll have to draw conclusions as to what held us back from really the remaining five percent we needed to win in this election in order to succeed."

'You only get one kick at the cat': Schreck

The Canadian Press quoted NDP President and former cabinet minister Moe Sihota saying the party needs to figure out why it lost, but that to have a "revolving door on leadership" won't help.

That raises the question of whether a case can be made for Dix to stay.

Schreck said he believes there is no such case. Dix is intelligent and hard working, but "in this business you only get one kick at the cat when you have that kind of disappointment," he said. "That's just the way politics work."

The party will have a mandatory leadership review at its convention in the fall. Schreck said the party would be wise to change leaders in 2015 or 2016 to get a boost before the next election.

"Until then Adrian should stay on... with no expectation he's going to cling to power," said Schreck. "Anyone going through what he just went through would take some time to articulate what I've just said in his own words."

It's only two days after "the disaster" and Dix will need time to make the right decision, he said. "The pendulum swung so far you can't do it again."

Senior staff will have to change as well and the whole campaign approach will need to be rethought, he said. "The major thrust was to lower expectations," he said. "Which could be one of the reasons the base was not sufficiently energized to get out and vote."

Dix can stay, if he remakes party: member

Nanaimo MLA Leonard Krog, who was first elected in 1991 and ran for the party leadership in 2003, said it's too early to make decisions about whether Dix should stay or go.

"We haven't even met or spoken as a caucus and I wouldn't comment one way or the other on Adrian's leadership or anyone's leadership of the party," he said, later adding that Dix did a good job articulating the NDP's values. "He spoke for me."

The party will be figuring out for a while what went wrong, he said. "We all ran campaigns. We all participated. Candidly, we built the platform together."

Vancouver-Hastings MLA Shane Simpson told the Vancouver Sun the party would have to have a conversation about leadership, but that it is in no hurry to do so. The same article quoted Vancouver-West End MLA Spencer Chandra Herbert saying he's not hearing any calls for Dix's resignation.

"The short answer is yes he can," said Don Anderson, a member of the NDP since the 1980s and a former director of research for the caucus. "The party needs a serious remake in my opinion. If he's willing to take that on, he can survive."

Such a party makeover would include changes in senior staff positions and a rethinking of how the party campaigns, he said. "There's no internal organizational strength. It never came back after 2001 when we got slaughtered."

In this election the party seemed to have bought the Jack Layton campaign, brought in federal NDP officials like Brian Topp and Brad Lavigne to run it, and stuck with it even when it wasn't working, Anderson said.

"It was like a pre-packaged campaign, so nothing shifted," he said. "It's just really difficult to have someone who has no attachment to the province come in and run a campaign."

The campaign managers did not, for instance, appear to recognize the damage done by taking a position against Kinder Morgan's Trans Mountain Pipeline expansion proposal mid campaign, he said. Environmental groups applauded the stand, but it also fed into the BC Liberals' narrative about the NDP being anti-business, anti-development and not to be trusted on the economy.

Anderson, chuckling, noted Dix made the announcement in Kamloops, a city that is home to a (now closed) refinery. *

"I think there has to be a re-alignment of what the NDP means to itself and what it wants to mean to the rest of British Columbia," he said. "We don't know our own voters and we don't know the electorate anymore."

For three elections in a row the NDP has failed to establish a compelling narrative on the campaign trail, said Sean Holman, an assistant journalism professor at Mount Royal University in Calgary who covered B.C. politics for various media outlets including his Public Eye website.

The NDP needs to come to grips with why it keeps losing and look closely at who is staffing the political backrooms, he said. "It's time to take a fundamental look at those personalities and the advice they've been providing to the party," he said. "This is clearly a problem that has existed before. It's a problem that's continued despite the fact the NDP should know better by now."

A case can be made for why Dix should stay, said Holman. "He appears to have the capacity in some instances to learn and self reflect. That's sometimes not easy to find in politics."

Holman's one criticism of Dix is he seems not to have adjusted how he responds when pressed in an interview. "When he is put on the defensive, when he is addressing an issue where the media wants a straight answer, he has from time to time shown his inability to do that. He fences around. It doesn't come off very well."

And while it's possible for Dix to stay, Holman added, "The political dynamics that exist will likely make that impractical."