It won't be hard to find people who will point to tonight's Liberal victory and claim that negative politics beat positive campaigning. 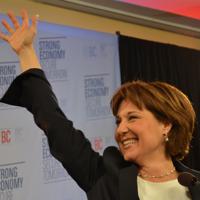 But the answer may be that a good campaign beat a bad one.

The incumbent Liberals waged an aggressive battle that focused on raising fears about job losses and New Democrat leader Adrian Dix's personal trustworthiness. The NDP, which had pledged a positive campaign, spent little time reminding voters of why the Liberals were so unpopular.

"It was a disastrous campaign and I felt that through most of the campaign," political scientist Hamish Telford said of the New Democrats' effort, which saw a 20-point lead in the polls turn into a five-point deficit when the ballots were counted.

"I thought the NDP was not campaigning effectively," said Telford, head of the political science department at the University of the Fraser Valley. "I thought that Adrian Dix was quite lacklustre in both the debates. But I thought the campaign was going to be good enough to succeed.

Telford said much of the credit must go to Premier Christy Clark.

"A lot of people are going to focus on the negativity of the Liberals, that they ran a very negative campaign with a lot of attacks," he said. "But I also believe it had a lot to do with the buoyant personality of Christy Clark. She's always upbeat, positive and optimistic."

Clark's ability to project optimism while knocking down the NDP -- combined with Dix's "charisma deficit" -- is what turned the tide, Telford said.

He said there will inevitably be a great deal of soul-searching within the NDP. The party caucus will be bitter and it won't be easy for Dix to meet them, he said.

"I feel terrible for the man," he said.

However, Telford said, "He didn't pull it off and he's going to have to carry the can for it."

Dix insisted on election night that the positive pledge was no mistake.

"I believed and I still believe running a positive campaign was the right approach," he said.

Saying he will have to accept the voters' verdict, Dix said he had wanted to get young people interested in politics again.

"One way to address that is to stop attacking people personally," he said. "I'm not naive about it. I think it was the right thing to do."

Pollster Greg Lyle, managing director of the Innovative Research Group, said the NDP campaign "got very negative in the last week" of the campaign.

But the NDP defeat was not really about being positive or negative, he said.

"You're taking a pretty big chance when you elect as leader of your party somebody who was fired for faking a memo," Lyle said. "His record was just a scary record. At the end of the day I think some of that sunk in."

When Dix came out against the Kinder Morgan pipeline, voters thought "maybe he's not as safe as they thought he was," said Lyle, who was Gordon Campbell's campaign director in the 1996 B.C. election.