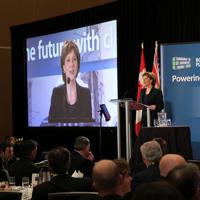 "It's a once-in-a-lifetime opportunity but we need to seize it," she reportedly said during a recent campaign stop in Chilliwack. "We have to make sure we can capture this moment."

Clark's verb choices may overstate B.C.'s role. It's not the province, after all, that will "seize," "capture" or otherwise possess a large and lucrative share of the global market for liquefied gas -- at least not directly.

That effort is being led by the nearly 20 oil and gas companies, some among the planet's biggest, now jostling for real estate along the province's Pacific coastline.

Very few of those companies are Canadian. Some are fully owned by Asian governments. The 12 projects they're proposing are based on a shared economic logic.

First, pipeline natural gas from B.C.'s northeast to industrial facilities on the north coast. Next, liquefy that gas by cooling it to -162 degrees Celsius. And finally, send it on tankers to Japan, Korea, China and other energy-starved economies.

It all adds up, in the lexicon of Clark's campaign, to "a once-in-a-lifetime opportunity" that B.C. needs "to seize." But in fact it's the province's coastline the Liberals have offered up to the global marketplace.

The National Energy Board has so far granted export licenses to only three liquefied gas projects: One led by Shell, the other by Chevron, and the third by LNG Partners, a Texas-based firm partnered with the Haisla First Nation.

That latter project is the furthest towards completion. It's expected to export 700,000 tons of liquefied gas each year starting in 2015. The others could take years longer.

Yet so many global oil and gas giants are also "elbowing for terminal space on the coast", Alberta energy analyst Peter Tertzakian wrote in February, that "western Canada doesn't need any more LNG project announcements... It's too crowded."

There were ten proposals at the time of his writing. Earlier this month Liberal Energy Minister Rich Coleman announced two more: one Australian, and the other Korean.

"Will they all go ahead?" Coleman reportedly said. "Big question, but the interest is exceptional."

Nobody within the liquefied gas industry seriously expects 12 export terminals in operation along B.C.'s coastline. As The Tyee reported last week, credible sources believe even four to be unlikely.

"The other prospect," said Michael Rieke, managing editor of Platts' LNG Daily, "is rather than all of them getting built, some of the projects will be combined so that you have more investors in fewer projects."

That prospect is hardly comforting for Will Horter, executive director of the Dogwood Initiative, a Victoria-based green group leading the fight against oil tankers in B.C. waters.

The oil and gas companies proposing to build export terminals up and down the west coast are "formidable opponents," he said. "They're used to getting their own way."

Should the fact that most of them are owned outside Canada, some by Asian governments, worry British Columbians?

"It's a good sign when we have foreign companies from Korea, from Japan, from China showing an interest in our natural gas sector," said trade minister Fast.

Horter isn't so sure. "There are some checks and balances on Canadian companies that don't exist on foreign ones," he said. "So yes, it is an issue."

Below is the latest list of energy companies -- grouped by project -- proposing to acquire their own piece of west coast real estate. Their combined annual revenues are about $2 trillion. If the past few months are any indication, the list could soon grow longer.

c) Mitsubishi Corporation -- One the planet's biggest companies, with operations in about 90 countries. 2011 Revenues: +$62.7 billion

b) PETRONAS -- Integrated oil and gas company fully owned by the Malaysian government, among the world's largest corporations. 2011 Revenues: $75.3 billion

a) Nexen -- Calgary-based oil and gas company recently purchased by Chinese-government owned CNOOC Limited, itself among the world's largest independent oil and gas companies. 2011 Revenues: $6.9 billion (And for CNOOC: +$40 billion)

b) Inpex Corporation -- Oil and gas company owned in part by the Japanese government with operations in over 26 countries. 2011 Revenues: $5.3 billion

a) AltaGas Ltd. -- Calgary-based natural gas, power and utility company with operations in Canada and the U.S. 2011 Revenues: $526.7 million

11) As yet unnamed LNG proposal (Squamish)