In mid-February, Premier Christy Clark told British Columbians to expect vast riches from her liquefied natural gas strategy -- up to $260 billion over the next 30 years. 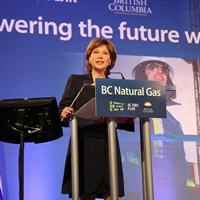 "We are at a crossroads now," she told reporters at the time. The province could either "seize this incredible opportunity," Clark said, or "turn away from it."

But the Liberals would only provide vague details about how they actually calculated that $260 billion in potential tax revenues, or the $130 billion they expected to receive under a less optimistic scenario.

Those estimates, explained a government release, were "based on analysis done by independent consultants." The analysis itself keyed off information provided by the government, "as well as the consultants' own independent assumptions."

A week later B.C.'s energy ministry released two reports, one prepared by Grant Thornton LLP, and the other by Ernst & Young. Neither has received much public scrutiny, though the credibility of Premier Clark's LNG strategy rests upon them.

In fact, one report suggests LNG tax revenues could be nearly $200 billion lower than the highest Liberal estimates. And as The Tyee learned at a recent LNG-themed conference in Vancouver, both rely on market predictions that high-level industry sources say are unlikely to materialize.

It's not easy to make a clean comparison between the two independent reports, and the Liberal revenue estimates extrapolated from them.

Each one predicts LNG revenues over a 20-year time period. The government's own estimates stretch 30 years into the future, and combine data from both reports.

For instance: Premier Clark told British Columbians in February that LNG tax revenues over the next 30 years could be as high as $260 billion.

Under the most optimistic LNG scenario, Grant Thornton predicted tax revenues over 20 years could reach $270 billion. Ernst & Young, meanwhile, put its highest estimate at $224 billion for the same time period.

Somehow the Liberals combined both estimates and added 10 years to their timeframe. But no government calculations have been made publicly available.

Here's why that could be significant: Premier Clark also estimated that LNG revenues over the next 30 years wouldn't be any lower than $130 billion.

That's roughly in line with what Grant Thornton predicted: low-end revenues of $130 billion over 20 years. But it's nowhere even close to the Ernst & Young report.

Under a worst-case scenario, Ernst & Young predicted that LNG tax revenues would only reach $79 billion over 20 years. That's a full $181 billion less than the Liberal government's most optimistic estimate.

Did the Liberals incorporate Ernst & Young's lower numbers into its calculations? Or did the government simply disregard them?

All an energy ministry spokesperson could explain by email was that Liberal estimates are "based on analysis done by independent consultants." (The Tyee's attempts to reach both reports' authors were not successful).

Even the lowest revenue estimates from Ernst & Young and Grant Thornton appear optimistic once put into broader context.

Both reports assume that at the very least, B.C. will have five LNG terminals in operation by 2018, exporting 82 million tons of gas each year.

Yet a separate Ernst & Young report released last month noted that only four LNG projects have been officially proposed, exporting about 50 million tons. And, it added, "not all projects are expected to go ahead."

"We have a multitude of LNG export projects here in B.C.," Shell vice-president Anders Ekvall reportedly said. "Only a small subset are expected to prevail."

In this regard B.C. isn't unique. Of the 19 LNG export projects being proposed in the U.S., Republican congressperson Charles Boustany said he "suspects somewhere around five" will actually go ahead.

"The eventual number of facilities that can export will be limited," Boustany predicted at last week's Pacific Energy Summit in Vancouver.

So to recap: Premier Clark announced in February that LNG tax revenues could provide up to $260 billion for the province -- or $130 billion, at the very least.

The Ernst & Young report her estimate was partly based on projected revenues as low as $79 billion (albeit, over a smaller time period).

And even that worst-case scenario, along with Grant Thornton's, is built on assumptions that several industry sources may consider unrealistic.

Nevertheless, a B.C. energy ministry spokesperson wrote in an email, "the market potential for natural gas is clear and demand for LNG is growing."

That confidence is ultimately based on a quirk of international finance.

Japan, South Korea, China and other Asian markets pay much higher prices for natural gas than it costs to produce in North America.

For instance: Right now buyers in Asian countries are paying about $18 for a unit of natural gas, compared to the $4 that same unit would cost across the Pacific.

It's a complex dynamic, influenced in part by new "fracking" technologies, which have oversupplied North America with gas, and drastically lowered domestic prices.

The problem is that so many LNG exporting nations are also eying that price difference -- including Australia, Qatar, Russia and Mozambique -- that Asian markets are starting to seek lower prices.

That would be a good thing for countries such as the Philippines, which is just now planning to import large volumes of liquefied gas. Indeed, the country's secretary of energy, Carlos Jericho Petilla, told the Summit that LNG prices "can only go down."

But it doesn't bode well for B.C.'s own export industry. Already, major LNG proponent Chevron has announced that if Asian prices continue to decline, "projects won't get built."

At this moment, though, industry opinion also suggests B.C. is unlikely to realize tax revenues of $260 billion, or even the lower Liberal estimate of $130 billion.

After election day, then, will the B.C. government continue to share Clark's conviction that liquefied gas represents an "incredible opportunity"? Or will the province's next leaders simply "turn away from it"?