"I would love a Walmart. When we lose Zellers, where do we buy AFFORDABLE children's clothes, and toys?? What is the big deal about Walmart! I, for one, like to save money." 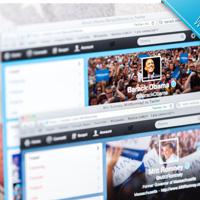 My US Election Web Spats: An Expat's Tale

That's the opinion of one Smithers, B.C. resident, who recently threw her two cents into a lively debate over whether the big box store should be invited into town. Two dozen others participated in the conversation, with hundreds more observing.

This wasn't a town hall meeting, at least not the traditional kind. The discussion happened on Mayor Taylor Bachrach's Facebook page, sparked by his link to a media story about alternatives when stores like Fields or Zellers pull out of a community.

The comments poured in.

Much has been made about social media's role in elections, but not about its ability to connect leaders to their constituents -- and hold them accountable -- every day during their term of office.

The Tyee talked to five B.C. mayors to find out how they use social media, and how they think it has changed people's ideas of and engagement with local politics.

Before Smithers town council went on record as opposing the Northern Gateway pipeline, Bachrach says he got a good idea of what the community thought about the issue by asking them on Facebook.

"It's a game-changer," he says. "I really believe that one of the key roles of local politicians is communicating with their constituents. Historically we have had a fairly limited toolbox for doing that. You can meet with people one on one or on the street, you can communicate through your local newspaper or radio, but social media has added such great potential."

Port Coquitlam Mayor Greg Moore put up a survey on social media about the budget, and got 250 responses.

"It was phenomenal compared to the four you would otherwise get from the same four people every year," he said. "With social media, you can actually engage in a conversation about the budget."

In Dawson Creek, Mayor Mike Bernier got a surprise when he used social media to inform people about water restrictions during drought conditions.

"Typically, unless someone takes the time to read the paper or watch TV news, they would have no clue there were water restrictions or they would not understand why. Facebook and Twitter has allowed me to get that message out instantaneously. You can actually kind of get ahead of the argument sometimes because people will comment, 'Well obviously this is bad planning from the city, why don’t we just find another water source.' Then I can go on and say, 'Here are the documents, here is the background,' and it is amazing how many people will comment right afterwards, 'Oh, I didn't know that. Thanks for the info.'"

Within a day, Bernier can post on his Facebook and have 50 people commenting on it within a couple of hours.

"It would be pretty well impossible to hold a town hall meeting or meet with 50 different people in that kind of time period," he says.

In Saanich, Mayor Frank Leonard uses social media to spark political action by the provincial government, reaching out to other mayors on Facebook because it is quicker than phoning their office and trying to track them down.

"At the same time, I was on Facebook and Twitter expressing my frustration with transit and was getting good community discussion of it and ultimately a lot of media coverage. That led to the minister appointing an independent panel to review transit, and I would credit social media being a big part of that."

Some mayors use social media just to be sociable and human.

"People tease me about things, they tell me about their grandchildren," says Chilliwack Mayor Sharon Gaetz. "I post something funny or add photos. I have over 3,000 friends and some of them are children, because I go to the schools and talk about local government. You are offered an opportunity through social media to put a face and personality to yourself."

Moore says he pondered whether he should post holiday photos. But when he did, "It was phenomenal. I got lots of comments. 'Oh, my cousin lives there.' It creates great relationships with people I don't actually know. I was travelling in Nova Scotia and in one town there were street banners and I put a photo up of them and asked what people thought. It started an impromptu conversation."

Bachrach has analyzed the age demographics of his Facebook friends. "The stereotype is that social media is young people," he says, "but the demographics on my page do not bear that out. The largest group is 35 to 44 years old and smallest is 13 to 17.

"I am 57," says Leonard, "and certainly with 40 and under, I get way more contact with them than I have ever had before -- university students, college students."

"The average age in Dawson Creek is 33. So I am an old guy, and I need to be able to connect with the people in my community... What social media does for me is get the people from teens to 30s who are normally just enjoying life and dealing with their day-to-day stuff and don't get involved in politics."

Bernier says that five or six years ago, he would never have imagined his parents on Facebook, but that's changed.

"It is amazing the comments I get from seniors. I will walk through Safeway on a Sunday morning and a senior will come up and say, 'I saw on your Facebook page you were in a Vancouver for a meeting. How did that go?'"

Lorraine Doiron of Smithers is that kind of senior.

"I went on Facebook because of my grandchildren," she says, "and I noticed that the mayor was on there. So now I can see what's being discussed, and I can call my friends who are not on Facebook and maybe don't have a computer, and tell them. It opens the door to what council does. I never had a clue before."

At the other end of the age spectrum in Smithers is Seth Jex, 17, one of a group of teenagers starting a youth council as a kind of advisory committee for town council. He says the youth council initiative can be traced partly to the way the mayor's social media presence opens him up to young people.

Jex first met Bachrach when the mayor visited his class in Grade 11.

"He showed us his Facebook page, and he was really young and had a spirit to him, and he used an iPhone," he says.

"Every day he posts something. He posts the next week's agenda, or takes beautiful pictures of our town and posts them, or he was at a snowboard competition and he posts that up, and for a youth, you like the guy on the first impression and you follow him on Facebook and it's engaging. The information is there, so it is easy to get into."

Always on the clock

Bachrach says the old view is that constituents elect a politician to council and that politician makes decisions on their behalf. If a constituent doesn't like those decisions, they can vote the politician out next election day.

But there's a shift happening, he explains.

"It has gone more from democracy being something every few years to an expectation that it is an ongoing conversation. As a public figure you need to be prepared for feedback, and it is an adjustment. You need to have a certain level of humility. It is an openness to have a dialogue."

Leonard acknowledges that being on social media puts a politician in a vulnerable position.

Many politicians don't want that level of exposure and are afraid to open the floodgates, says Tod Maffin, a digital communications consultant and a regular CBC Radio contributor on media matters. He thinks their fear is misguided.

"People respond to transparency," he says. "There is a distrust around representatives because of a perception that they are corrupt, when actually I think most of them work incredibly hard for not much money."

Maffin says that politicians who rely only on the old methods of communication appear to be trying to distance themselves from the public, "and this fosters that distrust."

Another fear, says Maffin, is that they will say something on social media that they can't take back. "But this is simply not true -- you can take anything back. It builds better trust if you make a mistake and then correct if publicly."

Every town has its self-styled naysayers, rebels, and contrarians that most politicians might prefer to avoid. Whether these people have hard truths to tell or they just like to engage in endless monologues, the idea of opening up to them can be daunting.

The five mayors say it is a delicate balance between the rewards of inviting opinions from everyone, and the risk of certain people highjacking a discussion. For people who want to engage in small details, for example, Gaetz says she will either start a discussion offline or refer them to her staff.

The mayors downplayed any problems caused by the occasional rude comment.

"Once or twice I have had someone come on and be aggressive or rude, and I just kick them off," says Moore. But he says he doesn't do that just because someone disagrees with him.

"In fact, disagreement gives us an opportunity. I have the example of biweekly garbage pickup. We had long strings of posts, mostly all negative, but it gave an opportunity to help educate them and also we just said, 'Can you give us some time? Because we think this will work.' And now people post that they love their garbage system."

Mayors Bachrach, Gaetz, Bernier, Leonard and Moore are all on Facebook as the mayor, not as "city hall." A city hall social media presence means developing policies and procedures around who can post, and about what.

"Governments are overburdened with policy, procedures, warnings and permissions," says Maffin. "They are not entrepreneurial organizations. Lack of policy causes paralysis in the public sector, as opposed to the real world where you just experiment."

One of the most noticeable impacts of the rise of social media in local politics?

"Letters to the mayor's office have almost disappeared," says Leonard.

But he admits it does take time.

"I give it an hour in the morning and then keep up during the day. I have the notifications come to my iPhone and I use an iPad," he says. "It is part of my work life. It's just part of modern government now."