Chinese miners being recruited to work in Canada are paying more than $12,500 CAD for the privilege, The Tyee has learned, and their actual wages are less than those advertised. 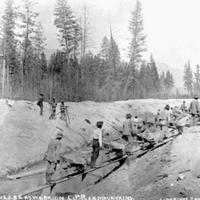 There has been uproar from unions this week after it was learned more than 2,000 Chinese miners would be on their way to British Columbia to work in mines run by Canadian Dehua International, a Vancouver-based company founded and run by a former Chinese government official, to name one company involved.

Posing as a Chinese miner, The Tyee made contact with two of three companies that placed ads on a Chinese website similar to Craigslist called Bai Xing and discovered the workers are paying the recruiters expensive fees in exchange for jobs in Canada.

The ads were placed on the employment pages of the site for the Chinese provinces of Shanxi, Henan and Sichuan, but agents did not know which mine they were recruiting for, only that they were in Canada.

One of the recruiters, who claimed to be working for a British Columbia-based company called the Canada CIBS Investment and Trade Group said 30,000 yuan ($4,700 CAD) is paid upon a contract being signed in China, and an additional 50,000 yuan ($7,800 CAD) is paid over 20 months after arrival in Canada.

"We are an employment agency and we need to charge you an agent fee," wrote the recruiter in a conversation in Chinese via QQ, a Chinese version of MSN Messenger.

According to China's state-run media outlet Xinhua, a coal miner in China earns about 1,000 yuan a month, making the upfront agency fee two-and-a-half-year’s salary for workers who accept the offer.

The recruiter said the employer will deduct the remaining recruiter's fee from workers' paycheques, about $400 CAD a month.

The advertisement offered miners jobs in Canadian mines at a rate of $25 to $30 per hour, but according to the recruiter the wage is actually between $22 and $25 per hour.

The agent said applicants need a mining certificate or a reference from a company to be accepted, but the training and letter from the company could be provided for an extra 1,000 yuan ($160 CAD).

The miners' presence in Canada is dependent on their employer and they will live in dorms, must be able to speak 100 English words and are allowed to do what they please when not at work.

A recruiting ad translated by The Tyee included the promise of "a possibility of immigrating to Canada" and the ability to "sponsor your family to Canada, too."

Under Canadian law, skilled temporary guest workers can apply to immigrate to Canada after four years, but their families can come over well before then.

"After you work in Canada for six months you can bring your family," said the agent, becoming seemingly irritated with a follow-up question about if families would live in dorms as well.

"Why would you insist on your family going there, you can go back to China to visit your family once a year on 14 days paid holiday, isn't that enough?"

A Vancouver representative for Canada CIBS Investment and Trade Group in Vancouver said her branch was not involved in the recruitment of miners and to contact the company's Chengdu branch.

Jimmy Yan is an information officer for Access Pro Bono, and helps Chinese immigrants with legal issues in Canada.

Yan said he isn't surprised Chinese workers are paying fees to recruiters, but considering China’s overall safety record for underground mining he is concerned about who is in charge of the operations.

"Why would we work with a country which are the worst mining producers [in terms of safety]?" asked Yan.

He said typically Canadian authorities would be on site enforcing Canadian safety standards in the mine, but also said he fears Chinese workers could be injured due to communication gaps, such as not being able to read instructions in English.

He said many of the miners who would come to Canada would likely be considered the best miners in their field and part of the lure of coming to Canada is the increased safety.

That's where those opposed to bringing in foreign workers are most frustrated.

The United Steelworkers' Union has said on its website; since 50,000 workers have died in Chinese mines since 2011, according to China Mine Disaster Watch, B.C. has nothing to learn from China's practices.

Frank Everitt, president of USW Local 1-424 said the claim B.C. doesn't have the expertise to run the mines does not excuse the recruitment of foreign workers.

"I just think it's shameful, I think there are enough people in Northern B.C. that they could recruit for the mine," said Everitt.

"It's not that we haven't done it, it's just that nobody has put the resources to it and it's a scam to bring guest workers in."

Everitt said the average base salary for a miner in the province is $34 an hour, and the union has said the companies are just trying to undercut local miners to pocket more money.

Company president, recruiters not in agreement on pay rates

But Canadian Dehua Mines founder and president Liu Naishun said the workers at his mine will be paid upwards from $28 an hour, three dollars an hour more than the top-end salary quoted by the recruiter.

In a recent article in the Chinese newspaper Ming Pao Liu insisted it costs more to hire a Chinese worker because their airfare and dormitories must be provided and the reason the miners are being brought in is purely for their expertise.

But, in a 2007 interview with the same paper, Liu said the company would try to hire locally first, and if not enough people could be found, employees from "other countries" would be sought and he would not undercut Canadian wages.

Recently the USW released ads looking for miners originally published by mining companies that specified mandarin speakers were wanted, a tactic the union said was done on purpose as an excuse to disqualify Canadians and bring in foreign workers.*