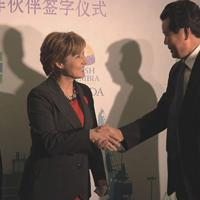 Temp Miners from China Dig up Trouble for Clark

Premier Christy Clark has decided to kill British Columbia jobs by importing up to 2,000 coal miners from China -- the world's deadliest coal producer.

Prime Minister Stephen Harper has already started signing their temporary foreign workers visas, but will they also be death warrants for some of those miners?

It's the wrong decision in every imaginable way.

And it feels like yet another outbreak of racism against Chinese workers that has plagued British Columbia since the gold rush in the 1860s brought the first wave of labourers from China.

Racism? Yes. Up to 2,000 Chinese temporary foreign workers at as many as four mines with heavy Chinese investment will be paid less than Caucasian or other workers of different ethnic origins in the mining industry.

That's one big reason why they're coming here -- because underground machinery mechanics will be paid $25 to $32 an hour according to one coal company's job ads -- rather than Canadian mining industry rates of up to more than double that.

The Chinese workers will live in isolated camps at the underground mines in northeast B.C., just as in previous centuries.

Like their predecessors in the 1870s who came to work in B.C. coal mines, they will not have a vote in this country.

And like 6,500 Chinese workers brought to Canada to construct the CPR railroad through the mountains from 1880 to 1885 where at least 600 of them died on the job, they will also be doing some of the most dangerous work in the world.

The U.S. Mine Rescue Association says 50,174 coal miners have died in China just between 2001 and 2011, based on official numbers.

The association even keeps a ghoulish China Mine Disaster Watch page online that shows 411 dead and 124 missing so far in 2012 and eight dead and seven missing just in October.

Then there's the sad likelihood of a racially-motivated backlash against these Chinese workers for taking away jobs from Canadians, as the use of other temporary foreign workers as cheap labour has already done.

Clark actually had the nerve to announce one of these metallurgical coal mine projects last November as part of her vaunted "B.C. Jobs Plan" without saying the jobs were mostly for temporary foreign workers, not British Columbians.

And it's wrong in every way.