As her son Brian tinkers with the new projector system, Ann Nelson shows me around the Patricia Theatre. We sit on the balcony -- the best seats in the house, according to Nelson. 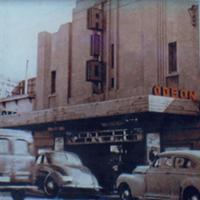 Where Can You Go for a Real Movie Experience Anymore?

"This is where I sit. I watch for the little heathens to have their stupid cell phones on, and go down and confiscate them. I menace them," she tells me.

She's tongue-in-cheek about the stress of operating a movie theatre, but wholly sincere about her obsession with cinema. It's been a lifelong love, even a home. She lives inside the theatre in a small studio apartment behind the projector booth, her mother was an usherette, and she grew up at the movies, she says.

A tour of the place is tinged with nostalgia, but Nelson is also a realist. Even the balcony has an ugly side: the seats were once used as segregated seating for indigenous people who would come down from the nearby Sliammon reserve, she says. Elders tell her they would sometimes "accidentally" spill soda over the railing onto the patrons below.

The Patricia looks much as it did in those vaudeville house days, and next year marks its 100th birthday. (Nelson proudly declares it the oldest continuously running movie theatre in Canada.) Originally built in 1913, it was rebuilt in 1928 and retains all the charm and must of the era. While cinema's seen some major shifts -- sound, reel-to-reel, Technicolor -- projection technology has not changed much in the last 60 years.

Until now. The conversion to digital projection has moved fast and furious, and starting last fall, Nelson began finding it difficult to acquire certain films. She was looking to get a 35 mm print of The Help from Disney, but they weren't able to find her a copy until nine weeks after other theatres started screening it.

"Finally after begging and pleading they told me, 'If you had digital we could probably accommodate you sooner,' and I thought 'That is the writing on the wall,'" Nelson says.

At no point did the studios or the distributors tell Nelson that film was being phased out. The only reason she began to consider purchasing a digital projector was when a friend, working at a movie chain, informed her the transition was happening now, and not later.

With the help of a community fundraising effort, Powell River's Patricia Theatre is one of a few single screen cinemas that found a way to make the shift. It's a fast-moving trend that's affecting indies and multiplexes alike.

"Cinema is 120 years-old," Nelson says, "And it is this year that the big changes are happening."

The future in 3D

The business of movie exhibitors has always been cut-throat, but now more than ever the multiplex is king. As of this month Cineplex, Canada's largest multiplex chain, will complete their conversion to digital projection, according to a company representative.

The digital takeover is nigh. About 90 per cent of new releases in Canada are digital, and studios do not plan on staying in the business of 35 mm film long.

"Sometime in 2013, all screens will be digital," said Patrick Corcoran from the National Theatre Owners Association (NATO) in a magazine interview. "As the number of digital screens increase, it won't make economic sense for the studios to make and ship film prints. It'll be absolutely necessary to switch to Digital Cinema to survive."

Studios have yet to officially announce the end of film, but Fox Searchlight sent a letter in November "strongly advising" exhibitors in the U.S. to give up on film.

The death of 35 mm film was accelerated when the price of silver suddenly jumped from $5 to $25 an ounce this year. Film reels are not only expensive to print, they are cumbersome to ship. Film canisters can weigh as much as 23 kilograms, and the shipping cost for studios is steep. NATO estimates it cost studios $1 billion a year to print and distribute film.

Three-quarters of all screens in North America are now digital, and as they continue to convert, studios will stop bothering with film altogether.

The Patricia made the full transition last month, with the help of a fundraising campaign, to keep pace with the changing industry. The slogan for the effort was "digital or dark?" -- the existential question for independent theatres in Canada.

A local group called "Friends of the Patricia" started a campaign to raise $90,000 to purchase a new screen and a digital projection system. A single anonymous donor paid for new sound equipment. "Friends" launched a YouTube campaign, set up a Paypal account and held local concerts and events to raise the money.

When Nelson took over the theatre, it was labour of love. She acknowledges the theatre is not a profitable business and likely never will be, but it is uniquely placed to have a loyal built-in audience. Because Powell River is landlocked, the Patricia holds its audience captive; the next nearest movie theatre is a ferry ride away in Courtenay.

But like all great heroes, the theatre's greatest strength is also a curse -- it will never be able to draw on a larger audience. A representative for Cineplex looked into opening a twin cinema at the Town Centre mall, but it was established that the venture wouldn't be profitable because the audience size would never account for maintenance costs.

Rural theatres in Canada have converted to digital primarily by way of similar community incentives. Small towns with names like Neepawa, Glenboro and Deloraine have hosted charity auctions and shows to raise money from people who hope to save the picture show in their community.

Even major theatre chains can't afford the new projection systems alone. Royalties account for as much as 90 per cent of movie ticket prices, and theatres usually make the bulk of their profit on popcorn rather than actual movies.

Because studios still need to rely on exhibitors to screen their movies, they've brokered deals called "virtual print fees" to subsidize the cost. The four major Hollywood studios announced in 2008 that they would subsidize the purchase of digital systems through these agreements, and each agreement is negotiated with individual exhibitors. The fees subsidize the cost of a projector for theatres by awarding payouts for each digital film distributed to a theatre.

For many indie theatres the fees do not provide much in the way of financial help because they show later releases on less screens, but the system does significantly help multiplexes who show many new releases on many screens.

"Once the transition is made, it is on theatres to maintain and upgrade the equipment," NATO's Corcoran tells me. Any changes to the projection systems would also have to be funded by theatres. Virtual print fee agreements also expire, so if theatres miss that date they must upgrade at their own cost.

Small single screen cinemas in cities often close rather than take on the new expense. Some theatres can still use 35 mm by becoming repertory cinemas, but in small towns people tend to want new films, not just Hollywood classics. The pressure is to convert rather than revert.

Despite other theatre closures, "Friends of the Patricia" have made sure that the theatre can see both the full onset of digital and its 100th birthday next year. The organization is currently in the process of pursuing charity status so it can access grants and make further upgrades to the theatre.

"It's not like this is the only theatre that this is happening to. Some are just drying up and blowing away, which is unfortunate," said Amy Sharp, president of the organization. "So when you do see a small town that is rallying, it becomes newsworthy and people like to hear good news. It's true."