Satish Patel and his family are selling their home in Ontario and leaving everything behind to return to India. He waited five years for his parents to join him in Canada and he's giving up. 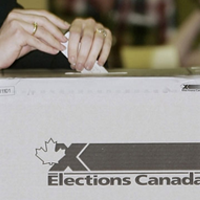 "I am the only son and I believe we have waited for much longer than normal," said Patel, whose parents live in India. "I should have considered this before I applied for immigration. But now that's already done and I have to see how I can move back sooner so my parents can be with me."

When Patel leaves, not only will Canada's population decline by one, but one political party or another may lose a potential voter. In this federal election season, Patel's predicament is emerging as an important issue in a number of close-fought ridings, including Vancouver South.

Leading into the election, the Conservative government admitted it had changed internal immigration targets to stretch wait times for parents and grandparents of immigrants applying to come to Canada to join their relatives. In February, when documents obtained through a freedom-of-information request brought that shift to light, Immigration Minister Jason Kenney defended the decision, arguing immigrants who brought higher earning skills should trump parents and grandparents wanting to come to Canada.

"There are trade-offs, and this government is focused on the priorities of Canadians which are economic growth and prosperity," Kenney told the House of Commons. "We need more newcomers working and paying taxes and contributing to our health-care system. That is the focus of our immigration system."

As an immigrant, Patel is still able to sponsor his parents to join him here.

That would mean going through a two-step procedure. First, Citizenship and Immigration Canada checks to see if the immigrant qualifies as a sponsor, which includes an income threshold. This step takes about 42 months, according to CIC.

Second, CIC assesses the parents themselves, which involves, among other tests, a thorough medical examination. The time it takes for this part varies depending on the country of origin. The expected wait time for sponsoring parents from India is 30 months, according to CIC.

Adding that up then, the total wait time for Patel and his parents would be about six years. But this is too long for Patel, who says he was lured into moving to Canada under false pretences.

"When I applied to immigrate, Canada was encouraging families to move here and promoting family reunification," he said. "Having moved to Canada now, I feel like I was lied to."

Patel is one of those immigrants Kenney says Canada needs to attract. He immigrated here in 2003 as an information and technology expert. For the first few years, he worked low paying jobs. After two years, he found a job that provided enough income to sponsor his parents for immigration. He applied in 2006 and the wait began.

While in Canada, Patel got married and had a son, who is now two and a half years old. But his parents are missing all of this.

"It's really hard for my parents because they only get to see my child on webcam," he said.

So Patel made a tough decision to reunite with his family in India.

But Patel's story isn't an anomaly. There are 147,768 other families also waiting for parents or grandparents to join them in Canada, according to the access-to-information request obtained by immigration lawyer Richard Kurland that revealed the new government policies.

The wait will be over for about 11,200 of those families in 2011, according to the same documents. But this is a 19 per cent decrease from the number granted permanent residency in 2010. Canada issued 11,486 visas to parents and grandparents in 2010 between January and September alone.

"[The government] lured more applicants into the system by posting on the website this historical processing time," Kurland said, "knowing full well that the real processing time would be significantly longer."

If the current backlog and approval rates continue, Kurland estimates that the average processing time will be at least 10 years. Just across the border in the U.S., it takes about one to two years to sponsor parents.

"When the Liberals were in government, parents were waiting three to four years and I was ashamed we couldn't do a better job," said Liberal MP Ujjal Dosanjh, who was born in India and moved to Canada in 1968. "But I didn't know that this government has no shame, that they can make them wait 10 years."

"That's irresponsible and inhumane," Dosanjh added, an accusation that may resonate among voters in the Vancouver South riding where he's running neck and neck against Conservative candidate Wai Young. Vancouver South's population is 50 per cent Chinese-Canadian and 10 per cent Indo-Canadian.

Conservative candidate Young was asked on Thursday to comment on the increased wait times and her opponent's criticisms, but she did not get back by publication time the next day.

Candidates in ridings with large immigrant populations run a risk if they ignore the issue, say advocates. "If political parties are serious about promoting family values, then they should be working on promoting family reunification for immigrants," declared Avvy Yao-Yao Go, Anita Balakrishna and Atulya Sharma, representatives of three immigrant legal organizations in Ontario, writing in the Toronto Star on Wednesday.

A privilege many would pay for

Many immigrant families are eager for their parents to join them in Canada. Some would even consider footing all of their parents' bills and not take a single penny from Canadian taxpayers.

"We don't want the medical facilities for them or the pension. We can take care of them," said Jagdeep Sandhu. "Just let them come here."

Jagdeep Sandhu immigrated to Canada in 2006 to join her husband. She has a bachelor and master's degree in education and taught for a while in Winnipeg. She stopped teaching so she could stay home and take care of her one-year-old and three-year-old.

She applied for her parents to immigrate to Canada just over three years ago and is still waiting.

"The most important thing is we love them. I want them here. I want to see them everyday," Sandhu said. "They are alone there. There's no one to take care of them."

"And the other reason is that they can take care of my kids and I can go to the school as a teacher," she added.

But for now, Sandhu would rather stay at home than to leave her children at a childcare facility.

Lawyer Kurland agreed that it would be possible to shorten the processing time if some families were allowed to cover all their parents' future expenses.

The solution that Kurland proposes is a three-tiered immigration system. The first tier would allow families who can afford it to opt out of the social security system completely.

These applications could be processed quickly. This way, the government wouldn't have to consider the economic burden that older parents might have, he said.

The second tier would be the current system. Families would apply and wait, but since some families would be processed in the first tier, the processing time would theoretically decrease.

The third tier would be for families who don't satisfy the income requirements to sponsor their parents. For these families, the province could step in and take care of the family's medical and social expenditures.

But Kurland isn't convinced that the government would consider implementing such a system.

"The immigration ministry would have to be courageous politically to go this way," Kurland said. "But if they do nothing, they're going to be in trouble, you can't have increasing processing times like this."

Not being able to live with parents is a reality for many immigrant families. But it is particularly troubling because the cultural values for immigrants often differ from Canadians', according to critics of the long wait times like Raminder Kang from Progressive Intercultural Community Services, an organization that supports South Asian immigrant communities.

"Here, the families are made up of only the husband, wife and children," Kang said. "But people live in extended families back home, and immigrant families have to ask friends and others to help take care of their parents overseas."

"And when grandparents are retired, they do take care of the grandchildren when there's a need," he added.

Sue Zhou, a Chinese immigrant living in Vancouver, wanted to sponsor her parents when she was pregnant, but decided not to. She said she was worried about the long processing times and the risk of rejection.

"Canadians have been here the entire time for hundreds of years, so obviously they wouldn't need to talk about reunifying," Zhou said. "But everyone who immigrates would want to be with their family and reunify. It's only human nature."

Immigrant families often obtain multiple-entry visas so their parents can visit regularly, instead of applying for permanent residency. But these visas restrict the length of stay to six months, sometimes up to one year, and are costly to maintain.

Julie Bulosan immigrated to Vancouver almost 13 years ago and currently works at the Vancouver General Hospital. She still hasn't applied for her parents to move here from the Philippines because she's worried about the long wait and the potential of a rejection. So instead, she brings them to Canada as visitors.

"It's nice having them here," Bulosan said. "It's not just them watching over our kids, but we can watch over them too."

Between airfare and medical insurance, the bills to allow her parents to visit are piling up. Buloson is adopting a son and said she hopes her parents could watch him grow up.

"We read in the paper that the immigration is taking fewer and fewer grandparents, they're not approving a lot," she said. "It's hard, but if we can sponsor them then they don't have to go back there." 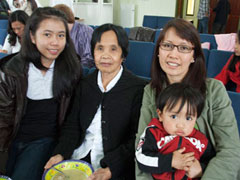 Julie Bulosan: 'It's not just [grandparents] watching over our kids, but we can watch over them too.'

Unlike Bulosan, some immigrant parents send their children to their home country so the grandparents can help take care of them while the parents work in Canada. The children then return to their parents when they attend elementary school. This has created some adjustment problems and separation anxiety among families, said Kelly Ing, chief operating officer at S.U.C.C.E.S.S., a settlement services provider.

"They miss the grandparents very much and they have attachment issues to their own parents because of the long separation," Ing said. "So we are creating another whole segment of difficulty here."

For most families, the wait might be worth it. But for some, like Satish Patel who is returning to India, it isn't. Patel said he hopes other immigrants would learn from his mistake.

"They need to make a decision upfront on how badly they want their parents to be with them and they need to be aware of the gains and losses," Patel said. "Things might change in the future and it might become more friendly for parents to join their kids, but I didn't weigh my options and I was too positive."