Driving the deserted Highway 37 south of Dease Lake, a crumbling gravel track runs through a mosquito-infested swamp on the edge of Little Gnat Lake. It is the decaying ruins of BC's last big northern infrastructure project -- a testament to publically-funded optimism and folly, and a forgotten scheme to open up the North. 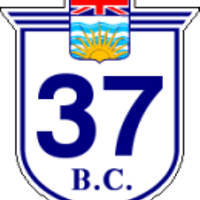 The year was 1969, and Social Credit Premier W.A.C. Bennett had just embarked on his dream of extending the B.C. Rail line from Fort St. James to Cassiar above Dease Lake. Such infrastructure would help exploit the Northwest's boundless gold, silver, copper and coal, but the vision entailed more than just that. It was the first step of continental integration -- one which would see British Columbia and North America connected to Alaska.

Planning broke down, costs ballooned, and a fiasco ensued. At one point, B.C. Rail began construction of a railway bridge at the confluence of the Stikine and Klappan Rivers that would be flooded under hundreds of metres of water by a simultaneous B.C. Hydro plan to dam the Stikine. A scathing Royal Commission was struck to investigate the boondoggle, and hundreds of kilometres of groomed right-of-way -- without a single metre of track laid -- was left to return to nature across the wild Stikine watershed.

Fast-forward more than 30 years: on Sept. 16, Stephen Harper announced that the federal government would invest $130 million to extend the electrical grid far into the northwest of B.C., restating Bennett's intention to connect B.C. to Alaska. With the past forgotten and a single gesture of taxpayer-funded largesse, the elusive dream of opening the North to industrial development was back on.

Government ready to go it alone

Up until last week, the Northwest Transmission Line (NTL) was facing grave uncertainty. The NTL was originally conceived to accompany the ill-fated Galore Creek mine north-east of Stewart; the plan, including the grid extension, was abandoned in 2007 when development costs spiralled out of control.

Premier Gordon Campbell revived the NTL, which was planned to connect Bob Quinn Lake to the existing grid terminus at Meziadin Junction, in September of 2008 -- with a provincial investment of $10 million to kick-start the environmental assessment (EA) process. At the time, Campbell justified the expenditure based on a private lobby group's report that projected the line would generate $15 billion investment dollars and 10,000 jobs. No clear timeline for such benefits was put forward.

The crash of economy and commodity prices saw private mining and energy companies increasingly reluctant to commit funds to the $250 million the province had already pledged -- a major stumbling block to building the line, or so it seemed. Reached by phone the day of the announcement last week, B.C.'s Minister of Energy, Mines and Petroleum Resources Blair Lekstrom confirmed the project would move forward, and that the province was prepared to go it alone.

"We made it clear, once we reached this agreement (for federal money) we will move forward on this project," he said.

The plan now is to move forward quickly -- Lekstrom said an application to the B.C. environmental assessment office will be made this fall, possibly to be completed within 180 days. Ground could be broken as early as next year, with a fully operational 287 kilovolt (KV) transmission line in place by 2012.

'Cleaner, greener energy' appears to be a myth

Once fully operational, what exactly would a 287 KV line be used for? The answer was unclear in Harper's announcement, which positioned the federal investment and the line itself as a boon to the environment.

"Our government is supporting environmentally-sound infrastructure and initiatives that promote cleaner, greener energy," said the prime minister in a press release. "The Northwest Transmission Line will facilitate the development of green energy and help provide British Columbia's northern and remote communities with more sustainable and affordable power."

Despite what was said, the province confirmed last November that the NTL, as currently planned, will not take a single northern community off diesel power. At present, Dease Lake has its own small hydro plant with diesel back-up, and Iskut burns diesel and pays subsidized rates comparable to grid power. Telegraph Creek -- located hundreds of kilometres north of Bob Quinn and at least 90 kilometres east of the Highway 37 itself -- would require its own massive infrastructure project to get off diesel. Stewart, meanwhile, is already connected to the grid.

In terms of energy development, the northwest accounts for only about 12 per cent of the province’s estimated run-of-river hydro potential, including the Forest Kerr run of river hydro project on the Iskut River, the largest planned IPP in the province at nearly 200 MW capacity. It is the only regional energy project likely to come into production any time soon.

Steve Davis, the president of the Independent Power Producers Association of B.C., says there is excellent potential to develop run-of-river and wind resources in the Northwest, but the great distance from demand centres is currently a barrier to development.

"The Northwest is very far from the load center where most of the electricity consumers live," says Davis. "The ideal place to generate an electron is right beside the house that is going to use it. The northwest is the furthest away [location for power generation] in the province."

What is likely to come into development sooner are a number of open-pit copper mines and at least one coal mine in the Stikine watershed, as environmentalists were quick to point out after the prime minister's announcement.

"Stephen Harper is trying to greenwash a project that has more to do with stimulating major mining projects than it does with bringing 'green energy' to northwest communities," said Merran Smith, climate director with Forest Ethics on Sept. 18. "This transmission line is anything but green."

Major mining projects include the Mount Klappan coal mine at the head of the Klappan River, proposed by Ontario-based Fortune Minerals. The nearby Red Chris open-pit copper mine near Iskut, being planned by Imperial Metals Corporation of Vancouver, is another of the closest mines to becoming a reality, and one that needs grid power to be economically viable. Red Chris is currently stalled amid a legal action initiated by Mining Watch Canada, which should be resolved by early 2010.

And then there are the Tahltan First Nations, centred around three northwest communities claiming about 150,000 km of mineral rich land, including much of the Stikine River watershed. They are currently divided on how wind, copper, coal and coalbed methane should proceed on their land -- particularly in the ecologically fragile area encompassing the collective headwaters of the Skeena, Stikine and Nass rivers.

'Nobody knows the future': mining exec

If there is anything certain about mining, it is its inherent uncertainty. Brian Kynoch, president of Imperial Metals Corporation, concedes as much when talking about the task of developing mines. "One day you've got a viable project, the other day you don't -- that's the business we're in," he said in August from his Imperial Metals headquarters on Hornby Street. "At the end of the day, huge sums of money are invested on assumptions about prices, what the exchange rate [is], what the costs are going forward, and that's doing business, right? Nobody knows the future, and if you did, why would you get involved in mining?"

By extension, the planning of infrastructure to fuel such ventures must confront an equal amount of uncertainty. To move forward with the NTL, the province is now required to take a massive, W.A.C. Bennett-inspired leap of faith. Last September confirmed this, when the province revived the NTL based on optimistic statistics generated not by government, but by a coalition of community and industry boosters initiated by mining interests.

The neglect of rigorous government planning for the NTL -- including the absence of any mechanism to sustainably pace the development of resources -- worries northwesterners like James Bourquin of Iskut, who lived through a botched plan to dam the Stikine, and later, the B.C. Rail extension as well. He says the B.C. Rail misadventure in particular should be viewed by government and taxpayers as a cautionary tale.

"It seems like history is repeating itself, except now it's a transmission line," says the U.S.-born conservationist and rafting guide. "If the government builds the power line in tough economic times, and the copper industry doesn't come, and the IPPs (independent power producers) are slow to come, then it will be just like the 1970s all over again."