As 2018 dawns, Canada’s news media are in danger of lurching into the abyss unless Ottawa takes action soon.

Enforcing our country’s anti-trust laws to stop the corporate consolidation and cutbacks in local news coverage would help to stanch the bleeding in the short term, but Canada’s Competition Bureau has shown little interest in taking such action.

More long-term measures, similar to those taken in other countries, are also needed to strengthen media policy in Canada to help protect news from the depredations of Darwinian capitalism and encourage the growth of digital journalism as old media fade away.

Whether our government has the foresight needed for this kind of bold action should become clear in 2018. More likely is continued inaction given Ottawa’s demonstrable blind spot when it comes to journalism.

When the country’s two largest chains swapped 41 newspapers in Ontario a few weeks ago and announced that almost all would be closed, they basically thumbed their noses at Canada’s competition laws.

Monopoly is much better for business than competition, and for years the Competition Bureau has proved powerless — or unwilling — to stop Big Media from growing even bigger.

In the November deal, Postmedia Network and the Torstar Corp. divided up large swaths of the southern Ontario community newspaper market and dared the Competition Bureau to do something about it.

Postmedia, 98 per cent owned by U.S. hedge funds despite supposed limits on foreign ownership of Canadian newspapers, pointed out the deal was “not subject to the merger notification provisions of the Competition Act and no regulatory clearance is required to close the transaction.”

That is technically correct given the dollar value of the deal (although no money actually changed hands), but it doesn’t mean the Competition Bureau can’t review matters after the fact, which it promised to do when pressed by reporters.

It could even roll the deal back, but don’t hold your breath, because Postmedia and Torstar have the precedent of regulatory inaction on their side.

The same thing, after all, has been going on for years mostly unnoticed in B.C., well out of the national media glare. The two largest provincial chains, Black Press (no relation to Conrad Black) and Glacier Media, have been buying, selling and trading titles since 2010 and then often closing them to create more lucrative local monopolies.

The Competition Bureau has not lifted a finger to stop them.

By my count, these two chains exchanged 33 community newspapers over a four-year period and immediately or eventually closed 24 of them, or a competitor in the same market.

The latest casualty came last month when Glacier Media closed the Westender, a Vancouver weekly it acquired from Black Press as part of a six-newspaper trade in 2013.

Glacier already owned the twice-weekly Vancouver Courier, which is Canada’s largest community newspaper, and the weekly Business in Vancouver. A 14-newspaper trade between the chains the following year has since seen 10 of them closed or merged.

Of the 14 paid circulation dailies that have been lost in Canada this decade — the latest being the Moose Jaw Times-Herald last month — nine were published in B.C. by Black Press (six) or Glacier Media (three).

As a result of these dealings, Black Press now owns every newspaper on Vancouver Island, which has a size and population similar to New Brunswick, except for Glacier Media’s daily Victoria Times Colonist.

You might think that newspapers are dying and should be allowed to do these kinds of competition-killing deals in order to survive.

I studied the annual reports of all publicly traded newspaper companies in Canada and the United States from 2006 to 2013 for my 2014 book Greatly Exaggerated: The Myth of the Death of Newspapers and found that not one recorded an annual loss on an operating basis during that time, despite an historic downturn in advertising revenues.

Fully 60 per cent of its earnings, however, went to pay the interest on Postmedia’s massive debt, most of which is held by its own hedge fund overlords, which are skimming their take right off the top in a nifty piece of financial engineering.

Torstar’s community newspaper division, Metroland, reported earnings of $21.2 million on revenue of $272 million in the first nine months of 2017 for a profit margin of 7.8 per cent.

Its flagship daily the Toronto Star, however, suffered a loss of $2 million over the same period. Torstar’s deal with Postmedia may help to subsidize the Star’s losses, but only by short-changing readers of its closed community newspapers.

A succession of media inquiries over the past half century — the 1970 Senate report on mass media, the 1981 Royal Commission on Newspapers report and the 2006 Senate report on news media — urged measures to slow Canada’s ever-increasing levels of media ownership concentration. All were ignored, however, and we are now left to deal with the consequences.

The Liberal government ordered hearings into media and local communities in 2016 after Postmedia merged the newsrooms of its duplicate dailies in four of Canada’s six largest cities. 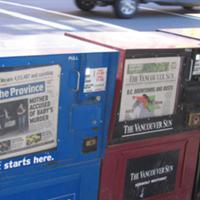 Postmedia had promised to maintain separate newsrooms before it got Competition Bureau approval for its 2014 takeover of the Sun Media chain.

The hearings, chaired by B.C. MP Hedy Fry, resulted in a report in June calling for the Competition Bureau to be given more power to stop news media mergers and takeovers, as well as other measures to boost local journalism.

So far its recommendations have also been ignored.

The Trudeau government’s continued fiddling while the country’s news media disappear will soon constitute negligence of the highest order.