“There were a lot of tears in the room.”

“We think the world of her.”

With appreciation and affection — that’s how Mary Polak and Rich Coleman, respectively, chose to speak about Christy Clark upon her resignation as leader of the BC Liberal Party on Friday.

But others who didn’t owe cabinet posts to Clark’s political methods are weighing in, too, people who have closely and expertly watched Clark in action, some having worked with her side by side. Their assessments are witheringly blunt and go straight to Clark’s character, portraying her as a leader who shucked principles in favour of winning at any cost.

One who paints that damning portrait is Jon McComb of CKNW, the radio station where Clark hosted a talk show before she ran for party leader. McComb, a CKNW host then and now, a veteran admired for his ability to pin dodging politicians of all stripes in an interview, did not mince words.

“I thought for a long time that Christy Clark had the potential to become an outstanding premier of British Columbia,” said McComb in a Monday editorial published on the Global News website.

“I got to know her when she worked at CKNW for a couple of years starting in 2007, in between political forays. We had numerous conversations about B.C. politics, what was good, what was wrong, what needed to be fixed and where the province was headed in the longer term.

“My gut feeling told me to be skeptical of her at first, after all, her two and a half year stint as education minister starting in 2001, tearing up teachers contracts, had revealed a gleeful partisanship and a dogmatic ferocity that precluded anything resembling compromise.”

McComb went on to describe two Christy Clarks. The one he knew then was a person “somehow wiser and more focused on the big picture.” She clearly grasped that B.C. was a complex realm to try and govern and that many of its citizens were hurting and needed help.

But another Christy Clark emerged when Gordon Campbell resigned as BC Liberal premier and the media came asking if she was aiming to replace him.

“When the cameras rolled her entire countenance changed,” McComb said. “All of the sudden she was ‘on,’ and the look in her eyes told me the old Clark never did go away, not really.

“In that moment I realized that pure and raw political drive was in command. This wasn’t about leadership, vision, or working on behalf of all British Columbians, this was naked ambition and the opportunity to make a lifelong dream come true.

“It was never clear to me what exactly she stood for ideologically-speaking other than the mantra of balancing the budget, and even that was a ruse.”

That brutal assessment of what made Clark tick was echoed by another expert observer of B.C.’s scene, political scientist David Moscrop.

After Clark first slapped her opposition’s agenda into a Hail Mary throne speech, then stepped down, Moscrop deduced it was because she had no interest in being opposition leader despite her statements to the contrary. “I don’t want to be too harsh, but I think it’s a sort of capstone on a career that’s marked by extreme cynicism and self-interest,” Moscrop told The Tyee.

That’s no legacy any politician would want. Some of Clark’s allies have rushed to sum up her public life very differently.

“She didn’t have recognition for the vision that she was putting in place while she was leader, but it’ll come,” assured Clark’s friend and biographer Judy Tyabji, whose husband Gordon Wilson was hired by Clark’s government as an LNG advocate.

The reason Clark resigned is that “she has so much class,” explained Coleman, who was Clark’s deputy minister for five years and held various high level portfolios. “We were very disappointed this morning,” he said, while expressing gratitude that Clark would selflessly “give us an opportunity to go through a leadership process without acrimony or issues.”

There was a time when Coleman and Clark both worked closely with Martyn Brown. Those would be the years when Brown was chief of staff to premier Gordon Campbell, giving him a front row seat to the making of political sausage, and also what character the politicians involved displayed.

During part of Brown’s era, Clark served as education minister. But when Clark won the contest to fill Campbell’s shoes, Brown was left out of the inner circle with no job in the provincial government, which likely did not endear Clark to Brown.

Nowadays, in the pages of The Georgia Straight and elsewhere, Brown is free to call ‘em as he sees ‘em. Here’s how former BC Liberal insider Brown saw Clark in 2012: 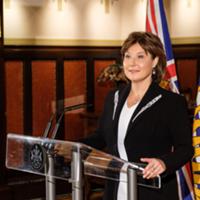 Christy Clark Resigns as Leader of the BC Liberal Party

“I think she is one of the most partisan premiers we’ve had in British Columbia. I think she is fundamentally misreading what people are expecting and hoping from her. They want a new tone that is civil and respectful.”

Contrary to what Coleman claimed about Clark’s “classy” path to departure, it was a spectacle of bad judgment, last ditch flailing and jettisoning of principles that humiliated Clark and her party, Brown said. He tried to imagine what Clark could say in her shrugging defence and figured it might be: “Going out with class and dignity never was my thing. Nothing is beneath me. I think I’ve proved that in spades over the last six years.”

“Has B.C. ever had a more guileful, unprincipled and unworthy premier than Christy Clark?” Brown asked. “It is a debatable question, but she seems determined to make her own case for answering that question in the negative.”

Brown then weighed in by concluding that B.C.’s worst premier ever would, in fact, have to be Clark. “I’ve got to be honest, if someone asked me how she should rank in that regard, I would have to say that I have seen no evidence to the contrary.”

“I’m done with public life,” Clark declared yesterday. But the public dissection of that public life — what Christy Clark did and what drove her to do it — is just getting underway.