They're both running against party establishments for presidential nominations. They're both equally popular with their party's base. Yet Canadian media, like their American counterparts, have taken sides in the contest between democratic socialist Bernie Sanders and arch-capitalist Donald Trump. 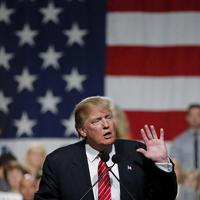 And that could serve Canadians even more poorly than it does Americans.

It's not simply the difference in total Canadian media coverage, in which Trump is mentioned roughly eight times more frequently than Sanders. It's also how the coverage tells the story: how the two candidates are framed, the issues the media highlight, and the ones they neglect.  Trump and Sanders are both popular with voters.

At the beginning of 2015, Democratic hopeful and former first lady Hillary Clinton held over 60 per cent support of Democratic and Democratic-leaning registered voters -- as she had through 2014. Sanders, the unknown independent senator from tiny Vermont, held less than four per cent -- behind even the undeclared (then as now) Vice President Joe Biden. But Clinton's advantage has slipped badly since then, mainly over her use of a private email server while Secretary of State. By the end of September, her support hovered just above 40 per cent. Sanders had passed the still-undeclared Biden to hit 25.8 per cent of Democratic voters.

Meanwhile, Trump's blazing early entry into the Republican race has settled back from over 30 per cent support among Republican and Republican-leaning registered voters to about 24 at the end of September.

Yet media coverage of the two candidates was vastly different.

That's one problem for American voters. It's another for Canadians, who stand to be impacted by whatever decision U.S. voters make but have different interests, and at times have shown quite different values.  Yet Canadian media mentions favour the casino, real-estate and reality-TV billionaire by an eight-to-one ratio.

Some have done better. The Globe and Mail has given the Donald only six times more coverage than Sanders. The National Post also was below average at seven-to-one, but had the most intense Trump coverage, mentioning him an astounding 141 times, or 20 per cent of all his mentions in Canadian print media. The reputedly more liberal Toronto Star was actually stingier, mentioning Sanders only once for every eight Trump mentions.

The Vancouver Sun had the worst record among print outlets, giving Trump ink 15 times for every time it acknowledged Sanders' existence. One of the two mentions of Sanders in the Sun was in a letter complaining about the paper's lack of Sanders' coverage.

But the most unequal coverage was on-screen. CTV National News mentioned Trump 37 times over the past three months -- and Sanders just once. CBC's the National restrained its Trump coverage to 20 occasions, and managed a single Sanders mention.  Some of the difference can be explained by the fact the Republicans have held two public debates and the Democrats none. (The first is scheduled for Tuesday, Oct. 13.) Debates attract public interest and media attention.   There's also the entertainment factor.

John Doyle, the Globe's television critic, argues that politics blurred into reality-TV when John McCain picked Sarah Palin as his running mate in 2008, launching her and her family into a successful reality-TV career.

Now, says Doyle, Trump has taken the genre further: you don't play the game to win, but to become the game. It's entertainment in spades. Sanders, in contrast, bristles with policy ideas. He's informative, not entertaining.

In refusing to cover a candidate whose speeches present a radical alternative to politics as usual, media in both countries can avoid confronting his ideas. Some of those might resonate strongly with Canadians facing their own election in less than two weeks.

Among other things, Sanders proposes to break up huge financial institutions, revoke NAFTA and other trade deals that he claims drive down wages and lose millions of jobs, make tuition free at public colleges and universities, ensure the wealthy and corporations pay their fair share of taxes, and establish a universal childcare and pre-kindergarten program.

(Other Sanders ideas are well-established in Canada, like his commitments to get unlimited money out of politics and to guarantee health care as a right of citizenship with a single-payer insurance system.)

Trump's program, on the other hand, is to "Make America great again." He says he'll do this by protecting Americans' right "to keep and bear arms"; building a wall along the Mexican border (and getting Mexico to pay for it); and deporting aliens and illegal immigrants, including any Syrian refugees the country accepts under President Obama.

A lifelong democratic socialist presents detailed, clear ideas for making his country a better place for its citizens. A consummate performer dispenses caustic put-downs. How have Canadian media -- those that pay any attention at all to Sanders -- treated the two?

Allen Abel, Washington-based correspondent for Maclean's, resorted to innuendo and name-calling. He calls the American "a preening, brilliant, motor-mouthed billionaire," and "the country's paramount self-promoter," but he also found "a solid majority of voters -- registered Democrats included -- in Trump's corner, or at least willing to consider voting for him." He lets racist and sexist comments and Trump's personal attacks on opponents go as merely "undiplomatic yawps."

Sanders, Abel slights as a "former pamphleteer, propagandist and mayor of Burlington, Vt.," as though the last were some mildly criminal act. He frames Sanders as an "angry upstart" (whose political career began in the 1970s), who gives "sweat-drenched harangues... fervent, flushed and fanatic on the topics of corporate wealth and public health."

Abel seems particularly insulted by Sanders' attacks on billionaires, counting 13 "scathing" mentions in one speech. Sanders thinks it's especially wrong for the Walton family to own more wealth than the bottom 40 per cent of all Americans. (Abel's employer, the Rogers family, has roughly twice Trump's fortune.)

The Globe and Mail did a better job, twice comparing Trump and Sanders, once as "radicals of the right and left" and another time as "upstarts." The reports did mention some policy differences.   National Post columnist John Robson claims that Hillary Clinton has a lock on the Democratic nomination despite what he also insists are "media efforts to hype openly socialist Bernie Sanders" (oddly, by giving him almost no coverage). His colleague Barbara Kay calls Sanders a "communist."

Curiously enough, the Post's editorial board seems to like Sanders, not because of his policies -- "name an item on liberal America's wish list and it is likely to be there" -- but because he promises to "spoil the Hillary Clinton coronation."

So if Trump has money, fame and the media's adoring attention, just how is the overlooked and reviled Sanders gaining so much support?

One answer may be provided by Silicon Valley web optimization company Instart Logic, which has suggested that Sanders is running the "most digitally effective campaign" of all candidates in either party, bypassing traditional media coverage.   But there's another reason for declining Clinton support.

Like the National Post's editorial board, many U.S. Democrats see Sanders as slowing down the Clinton juggernaut. But while the Post dislikes Clinton for not being right-wing enough -- coming out in opposition to the Keystone XL pipeline, for instance -- Sanders' supporters loathe her (and her husband's) record of cozying up to Wall Street.

They see in Sanders' values what they believe is truly needed to bring America back to a healthier, more democratic and egalitarian society.

Globe and Mail columnist Marcus Gee once compared Trump, not with Sanders, but to former Toronto mayor Rob Ford. For many voters, he said, "the rants unleashed by these raging bulls and against a privileged political class and overfed, inefficient governments ring true. In a plastic political world, they are desperate for something real. As long as they feel that way, they are going to be tempted, in Mr. Ford's immortal phrase, to 'go snake' and elect someone who promises to walk into the dinner party and smash a few plates."

But smashing a few plates does nothing to unmake a brutal neoliberalism or build a better society. That takes ideas, the kind that Bernie Sanders offers, but that the traditional media in Canada and the U.S. simply refuse to tell us about.