News last week of a stunning data breach at a Toronto-area hospital involving information on thousands of mothers places the proposed Digital Privacy Act squarely in the spotlight. 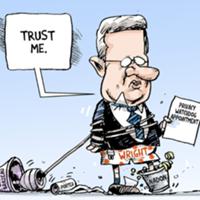 Bill S-4, which was introduced two months ago by Industry Minister James Moore, features long-overdue data breach disclosure rules. The new rules would require organizations to notify individuals when their personal information is lost or stolen through a data or security breach.

Most other leading economies established similar rules years ago, recognizing that they create much-needed incentives for organizations to better protect our information and allow individuals to take action to avoid harms such as identity theft when their information has been placed at risk.

While the mandatory data breach rules can be an effective legislative privacy tool, they only work if organizations actually disclose breaches in a timely manner. Bill S-4 establishes tough penalties for failure to notify affected individuals, but unfortunately undermines its effectiveness by setting a high notification standard such that Canadians will still be kept in the dark about many breaches, security vulnerabilities, or systemic security problems.

There are two major problems with the government's proposal, which appears to have been placed on a legislative fast track.

First, the standard for disclosing a data breach is set at "a real risk of significant harm to the individual." This standard is considerably higher than that found in some other jurisdictions.

In Europe, telecom breaches must be reported based on an "adverse affect to personal data or privacy" standard, which is also lower threshold than the Canadian plan.

Second, earlier versions of the privacy bill envisioned a two-stage approach in which organizations would be required to notify the privacy commissioner of Canada of material data breaches (a far lower standard), who would then work with the organization to assess whether a wider notification to all affected Canadians was warranted. The two-stage approach is increasingly common with New Zealand announcing plans for a similar approach late last month.

The Digital Privacy Act removes the notification of material breaches to the privacy commissioner altogether. The bill requires organizations to maintain a record of all breaches, but only to disclose them if the commissioner asks and no one seriously expects the commissioner to regularly ask every organization about whether they have experienced any data breaches.

The elimination of notifications of material breaches is likely to result in significant under-reporting since organizations will invariably err on the side of non-reporting in borderline cases and the commissioner will be unaware of the situation.

Rather than providing Canadians with the necessary information to take steps to mitigate against identity theft and misuse of their personal information, the bill will often leave them unaware of data breaches or security risks.

While there are other serious concerns with the Digital Privacy Act -- notably the massive expansion of warrantless voluntary disclosures of personal information -- the government promoted the data breach rules as the centrepiece of its effort to better protect Canadians against the misuse of their personal information. Yet the core requirements of that system actually provide less protection than earlier proposals and would be one of the weaker approaches in the developed world.

Privacy has emerged as dominant issue on Parliament Hill in recent weeks, with the focus on surveillance, lawful access, and the new privacy commissioner. The Digital Privacy Act has received less attention, however, its failure to keep Canadians informed about many data breaches should be added to the list of privacy disappointments.