The Tyee commitment to solid alternative journalism is a year-round affair. But it's just once a year that The Tyee braintrust turns its attention to creating innovative funding plans that will keep this worthy project afloat. That time of year has come again. We call these the April Initiatives. 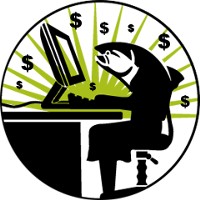 This year's April Initiative started from an unlikely source. A recent story in The Financial Post (it is necessary to read widely in this business) reported that small-cap mining operations were floating a new money-making idea: medical marijuana. In a down market for mining stocks, these companies were teasing investors with the possibility of entering a lucrative new business.

And then it occurred to us at The Tyee: it's a tough market for independent journalism as well. Why not generate outside income with a business that Tyee readers are likely to support both morally and, we hope, financially?

For The Tyee, medical marijuana sales may seem to place us at odds with the policies of the Harper government, which has lately attempted to crack down on home-grown pot. However, we're proposing something different -- office-grown pot. More specifically, a grow lamp under every desktop, and beneath it, at the feet of each reporter, a few hydroponically nourished plants. Each reporter will be responsible not only for his or her news beat, but for cultivating and delivering on deadline the cannabis crop that pays their way. The Tyee will be on the front lines of sales and distribution, a kind of activist journalism that will also help keep the rest of our investigative work well-funded.

Other revenue streams will flow naturally from The Tyee's new medical marijuana operation. We've always been an online publication but for the first time it will be possible to get Tyee papers, as well as our branded Tyee "No Pipeline" pipes. Naturally Tyee brownies will be just that -- totally natural, organic, and of course made with that special medical ingredient that tastes like one more. With our predominantly green-and-black colour scheme we need only add some red and yellow to create The Tyee Rasta Fish, featured on a complete line of knitted caps, t-shirts, and guitar straps.

Critics of the medical marijuana trade claim that it still carries tinges of its unsavoury outlaw past. There have been recent allegations of arson and even so-called "grow rips." Happily, we have studied the business intensively and are confident that it will not be necessary for us to engage in those sorts of activities.

We appreciate the support you have shown to The Tyee through a decade of journalism. Now we offer another way for you to support The Tyee (although not while driving, please). While our reporters continue to smoke out the hidden agendas of those in power, we'll be asking you to smoke a little more, too. Remember, it's not just for your glaucoma. It's for better independent journalism.