Good on Ethical Oil spokesthingy Kathryn Marshall for brightening our January with her comic stylings on CBC TV's Power & Politics. She and her straight men John Bennett of the Sierra Club and host Evan Solomon have been bouncing around the Internet along with speculation on whether CBC has taken the satirical radio show This Is That over to TV. (We've made it conveniently possible for you to enjoy the hilarity by embedding the video at the top of this article.) 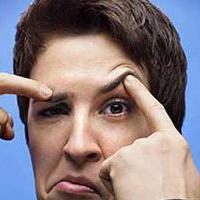 Who's Afraid of the Big Bad 'Fox News North'?

As a talking head, Marshall -- the wife of Hamish Marshall, a former strategic planning manager for Stephen Harper -- is just so embarrassingly bad it's hard to believe she isn't auditioning for Jon Stewart's Daily Show. She repeatedly refused to answer the question of whether her ironically named organization Ethical Oil is funded by Enbridge, the people bringing us the Northern Gateway pipeline and bitumen to B.C.'s coast.

I lost track of how many times Solomon asked her. I was mesmerized as the bleached-blonde, dead-eyed automaton repeated over and over that Ethical Oil was a "grassroots" organization. I dissolved into giggles when she said she wouldn't respond to "conspiracy theories" and then repeated the message track that there were shady foreign influences on Canadian interests.

I haven't laughed so hard -- or seen a TV clip earn such gleeful contempt and derision -- since last summer when another dead-eyed, bleached-blonde spokesthingy, Krista Erickson, decided she would just show that modern dance pretender what-was-what. For her treatment of internationally-lauded and nationally-adored choreographer Margie Gillis, Erickson earned Sun TV more than 4,000 CRTC complaints. Not to mention new fans for Gillis.

What distinguishes Marshall and Erickson from the general run of fools peddling ill-considered views is that they both display a sort of reverse genius. Their behaviour is so aggressively stupid and over-the-top that it's funny in the way Stephen Colbert is funny.

And those psychic twins are not alone. More and more news items leave us either slack-jawed or laughing as we realize that wasn't just another Onion story -- somebody really did that!

Like the woman who pepper-sprayed her fellow shopping-competitors queuing in the dawn light of a Black Friday morn as they prepared for their raid on super deals at the Wal-Mart. Ditto John Pike, better known as the "Casually Pepper Spray Everything Cop," whose nonchalance as he blasted a sedate seated row of Occupy Wall Street protesters at UC-Davis last fall turned him into an Internet meme. Soon he was Photoshopped into famous art works chosen for their giggle-potential.

This isn't just mere ass-hatedness, people. It's more. I believe we're seeing the dawn of a new form of comic performance art -- the "Pseudo-Satire" -- and like every emerging art form it needs awards to encourage its development.

So let me introduce my own modest proposal for keeping the humour coming: The Swift Awards, a special nod to the amusingly not-so-swift. Or perhaps they're dumb-like-foxes since they're getting famous with their antics?

Naturally this award is named for Jonathan Swift, the man who gave us the original Modest Proposal. No doubt he would be as frustrated as I to realize that the era of satirical column writing has come to end because in a world where shoppers stampede each other to death for gee-gaws there can be no such thing as satire.

I'm putting out a call for volunteers to help make my dream of the Swiftys a reality. We need to establish eligibility guidelines and categories for the inaugural awards. Oh, and set a fee that will allow us to profit from the nominations. And we need a trophy: say, a bronze baby in a roasting pan? Well, perhaps that idea needs work -- which is where the committee comes in. (What project isn't made better with input from a committee?)

In judging the Swiftys, the most important criterion is that nominees must have done something so ridiculous that it would be redundant to mock them. So I'm compiling a rough list of contenders who are notable for making me pause momentarily and wonder if it was April 1. The other sign of a Swifty-meriting performance? It feels just like an Ogopogo sighting -- you don't believe your own eyes and have the urge to smack the person next to you and ask, "Didjya see that?"

With that in mind, I'm nominating CBC Radio news reporter Renee Filippone for a Swifty for her July 28, 2011 noon news story interviewing a numerologist for some... er... insight into the new area code coming to B.C. phones. Courtesy of such intrepid reporting we learn the new numbers (236) are auspicious. Well quel relief!

What's next? Inviting an astrologer to foresee the premier's next move? Maybe interviewing a face-reader to discern the character of the opposition leader?

I know the exact date this Swifty-shoo-in aired because I posted it to my Facebook page where speculation broke out as to whether CBC is trying to hasten its own demise. Those who feel some responsibility to preserve the CBC (some because they work there) urged me to complain to the Powers That Be.

Why, after all, give aid and comfort to the lobby out to kill the CBC? They may aptly argue: having no public broadcaster is better than having one airing newscasts that leave us wondering, "Was that satire?"

I bet there's many a former New York Times subscriber thinking the same thing of for-profit media after reading public editor Arthur Brisbane's recent column. He asks readers if they think news reporters should challenge the erroneous "facts" that are asserted by the newsmakers they write about.

He was mocked across cyberspace as reporter after reporter weighed in to tell him that the job of journalists is to test the information for accuracy before publishing it and the point of an interview is to clarify what the source is saying -- not merely take dictation.

But the most common comment was: Is this a joke? Which is the true measure of a potential Swifty winner. Although I favour the nominees whose actions, like Brisbane's, illuminate heretofore confusing incidents such as how a paper as revered as the New York Times could have harboured Jayson Blair and Judith Miller.

We don't want to limit the Swiftys to media types, although I anticipate stiff competition there. If my dreams come true, it won't just be high-profile folk like celebrities and politicians competing -- ordinary citizens who are often overlooked by the awards industry will be eligible. Soon couples who try to sell their babies on Craigslist or movie fans who complain that the silent film The Artist has no dialogue could have a Swifty within their grasp.

In my vision, the soon-to-be-coveted Swifty will celebrate the true beauty of the art of Pseudo-Satire -- which is that anyone with bad judgment and social media can delight the mob.

I look forward to your submissions.