Running any kind of business during a coup d'état isn't an easy chore. Running a commercial radio station that speaks out against the military and the interruption of democracy in the eye of the storm is an even more daunting -- and dangerous -- task. 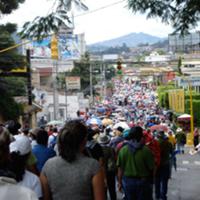 'What Is Minister Kent Waiting for?'

For the journalists at Radio Globo in Tegucigalpa, Honduras, the months since the June 28 coup d'état have meant death threats, raids by the armed forces, the destruction of transmitters, confiscation of equipment, and a presidential decree designed to shut them down for 22 days.

The station is on the second floor of a corner building on a busy street, just outside of the city's downtown core. It is bare other than basic amenities and a two room broadcasting studio. The smell of gasoline permeates the station, and two generators in the corner of the station manager's office are a reminder of the reoccurring electricity cuts imposed by the de facto government.

It wasn't always like this. The station, which celebrates its tenth anniversary today, started off as a music channel. After three years of 24/7 music and a low listenership, the station's managers decided to make a strategic shift towards what David Romero, the station's director, calls news that's "more linked to the people."

Everything changed on June 28, the day the nation was supposed to vote in a non-binding plebiscite to determine whether there was sufficient interest to begin investigating a public, participatory process of constitutional reform. A tug-of-war between the president, his supporters, the Supreme Court, congress and the army about the reform process was already underway, but few suspected that the outcome would be so harsh.

Warned, then raided by military

When David Romero, director of Radio Globo, arrived at the station at five in the morning for his daily morning show on June 28, he saw soldiers positioned outside the station.

"That caught my attention, and immediately what I thought was 'this is a coup d'etat,'" said Romero. The first thing he did after entering the station was check what his competition -- the other two corporate news channels in Honduras -- were reporting, and "they were not saying anything about the coup d'état," he said.

As a journalist with decades of experience under his belt, Romero knew he had to make a quick decision -- either report that the military was outside the station and something was amiss, or ignore it. "It took me about 30 or 40 seconds to make the decision. And the first thing I did was to announce that there was a

By noon, Romero received a call from an army spokesperson, warning him to "lower the pressure," and "tell the truth."

Later that evening, the military stormed the station, and began removing people from the building out into the street. Romero escaped through the back window. He was back on the air the next day -- but not before having been taken to the central army base in Tegucigalpa, where he was brought before army boss General Romero Vásquez Velásquez, who asked him to lower the profile of the station.

Romero and his team of journalists didn't cave to the demands of the military. Instead they continued to air live coverage of the coup as it continued to unfold through the summer and into the fall. A handful of other national media followed suit, but they were in the minority.

The corporate media in Honduras got behind the coup and their backers, says Romero, because the journalists were encouraged to cover the events to serve the interests of station owners -- who are among the richest and most powerful members of Honduran society -- instead of serving the public interest.

The attacks against Radio Globo haven't stopped. In August, their transmitters were sabotaged, and in September, the military raided the station in conjunction with a suspension of constitutional rights and the imposition of a decree allowing the government to shut the station down.

"Decree 124-2009, a measure published in the official gazette on Oct. 7th, allows the authorities to suspend any programme or media 'fomenting social anarchy' -- and, without saying so openly, is targeted at those that oppose the coup," said Reporters without Borders in an Oct. 21 press release.

Radio Globo's journalists turned towards the web after their equipment was seized, launching a clandestine version of the station online which has seen more than one million listeners, including more than half a million people from outside Honduras. Radio Globo journalists were back on the air as soon as the decree was lifted. Reflecting on the period since the coup, Romero says it's been a struggle, but worth it.

"If we hadn't reported on the coup right away, we'd be like the rest of the media here -- tranquil and trying to compete for second or third place," he said. Since June, the station has seen their market share rise from seven to 28 per cent. They've gone from relative obscurity to international acclaim for their work, winning a prestigious Spanish award for best radio station.

Most of all, says Romero, they've served the people of Honduras.

"We've always believed that Honduras needs profound changes, and that the oligarchy which has caused this country to be in a state of poverty that compares to that of Haiti can't keep running the country," he said. "And the radio took on that commitment."