It all began in 1774, when Ferdinand Juan Perez first met the Haida. Despite some tumultuous beginnings, post-contact trade rapidly expanded, which, among other things, led to the extirpation of the sea otter from the archipelago -- and introduced rats. 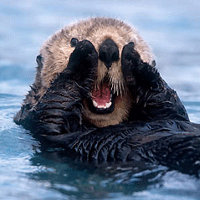 Too Many Sea Otters?

Centuries later, these seemingly isolated biological events have amplified, conferring a huge shift in the region's biodiversity. The loss of sea otters led the vast, nurturing kelp forests to all but disappear, consumed by an exploding sea urchin population free from predation.

Above the tide line, the introduction of rats has meant that many of the archipelago's islands, once teeming with raucous sea bird colonies, have fallen silent. Meanwhile, the rat population has slowly expanded on a rich diet of eggs, chicks -- even adult birds, caught sitting on their nests.

This summer, an eclectic collection of First Nations, government agencies, corporations, international non-profits and philanthropists moved to eradicate the invasive rats from select islands within the archipelago. As a member of the International League of Conservation Photographers and supporter of one of the conservation groups, I was invited to photograph the mission.

As I arrived in Haida Gwaii, I thought of the federal government's recent withdrawal from the Pacific North Coast Integrated Management Area ocean planning process, over concerns that engaging all stakeholders in developing a multi-use marine plan was too complex and ambitious.

In contrast, I witnessed in Haida Gwaii how smoothly a complex group can operate. To me, this project shows the strength of such diversity, and the potential of cooperative initiatives for our ecological future. I saw it firsthand, with the rat hunters.

The project started several years ago, with the goal of restoring seabird colonies devastated by rats -- particularly ancient murrelets, of which half the global population breeds only in Haida Gwaii. This diminutive and wizened-looking little seabird has so rapidly declined that it's now considered a species-at-risk in Canada. In effect, it's the poster child in the battle to save ecosystems from the deleterious consequences of invasive rodents.

One, the isolated island of Arichika, with trees ragged and worn raw by the violence of Hecate straight storms, was once home to an abundant sea bird colony visited regularly by the Haida, who collected ancient murrelets for subsistence. Today, the island is devoid of breeding ancient murrelets and other seabirds, like Cassin's auklets and storm petrels.

The other is the stepping stone Bischof Island chain, lying to the south of Lyell Island. It too was once vibrant with the cacophony of seabirds, but the goal is different here; post eradication, the question is if and how rats can migrate between islands separated by several hundred yards of frigid, life-sapping ocean.

The question is of the utmost importance, for to the east lies Ramsay Island -- which, come April, will be teeming with nesting seabirds. In the chain of the Faraday-Murchison Island group, Ramsay is the last rat-free stronghold. Lessons learned from the Bischof campaign will guide the development of the Faraday-Murchison eradication strategy, and the efforts to protect Ramsay.

Embedded with the field team, I'm enthralled by the professionalism, scientific rigor and discipline. The daily grind for this mainly female field biology team starts at 7:00 a.m. with a calorie-laden breakfast fit for a logger or two.

By 8:00, after an exhilarating five-minute commute, each island of the Bischof chain has one or two biologists on land, hiking the trap lines. Hiking may be too gentle an expression; this is hardcore bush-whacking. Each island has been divided into a 50-metre grid of bait stations, interlinked by the most rudimentary network of bush cut trails, and any momentary lapse in concentration is rewarded with at least a minor bruise, judging by the scrapes, cuts and generally scarred nature of the field team. Forty straight days out here takes its toll.

But at each bait station, the science begins. Intricately designed so that only rats can access the bait, each station is reloaded with bait, and the total bait consumption from the previous 24 hours is meticulously recorded by field computers and location tagged by GPS. Thus, rat activity is continually monitored, and the bait application can be fine-tuned as needed.

Late morning, a morale-boosting radio call crackles from the walkie talkies announcing hot CBs (code for cinnamon buns) are being delivered from the field camp -- a welcome calorie boost. As the daily grind of humping 30 pounds of gear across these islands proceeds, the 5:00 p.m. pickup cannot come soon enough. I am starving.

Evening finds us back at base camp, "Shangri-La," with another several-thousand calorie meal before us. It disappears, and we all go back for seconds. Nobody here is carrying an extra ounce of body weight -- the daily caloric intake cannot keep up with the amount of physical work this team is burning.

By 7:00 p.m., the decks have been cleared of dirty plates and replaced with field computers uploading data to a central computer -- once backups are complete, the data analysis starts.

The biologists switch from the physical grind to mental gymnastics, as the data streams to multidimensional graphs illustrating how rat populations on different islands are responding.

Drawing on a scientific foundation that has informed over 300 different island rat eradication campaigns on all four corners of the globe, debate begins.

Interesting hypotheses evolve about one island and its population that is refusing to take the bait. It's possible these are descendants of rats that survived or avoided bait during a previous but incomplete rat eradication over a decade earlier.

Various plans of attack evolve, but eventually, tipped off by infrared motion camera photographs that indicate the rats are checking the traps out, the plan settles. Tomorrow, the bait will be spiked with anchovy oil -- a culinary offering no rat can refuse.

Meanwhile, the bait uptake rate on Arichika has risen, peaked and crashed to almost zero -- a strong indication that sufficient bait, tinged with poison, has been consumed and the rats have died in their burrows. The team is thoroughly excited, within days of a possibly rat-free island -- a first in over two centuries. (However, two years of post-eradication monitoring data will be needed before the island can be officially declared rat-free.)

As the field season grinds on, island by island, the rat population steadily succumbs to the team's onslaught. This year's work is declared a success, which augers well for future plans. In the years following, recovered islands will be peppered with loud speakers faking nesting bird calls that invite others to come and prospect for suitable nest sites.

Time to scurry off

The next challenge for this group is to eradicate the rats of the Faraday-Murchison island chain, and protect vibrant Ramsay Island from a rat invasion. The islands are almost 10 times the size of Arichika and the Bichofs, and are treacherously rugged, making a ground campaign impractical. The solution is readily available -- precision, GPS-guided aerial helicopter baiting. It has been used to great effect on the majority of eradication campaigns conducted by Island Conservation around the world -- the downside is the expense of deploying helicopters to remote locations.

Resenting my last pre-dawn alarm, I reluctantly drag myself and my camera out to try and find some great sunrise shots. By the time I get back, the camp is being broken by the management team. And as we plough north across Juan Perez Sound towards Queen Charlotte city, I reflect on the complexity of this conservation program.

Coastal Conservation's tagline, "Restoring the Balance," resonates in my thoughts. This is a truly multi-disciplinary, multi-agency endeavor, with significant jurisdictional overlaps and complex logistic requirements. It seems ripe for dysfunction, but on the contrary -- this has to be the most well organized, cooperative and efficient endeavor I've ever been involved with.

It's a balanced approach that has meant success, and like the Great Bear Rainforest agreement, it's a conservation effort that I think Canadians can be proud of. It also illuminates the true potential of the cancelled Pacific North Coast Integrated Management Area process -- a program that had promised a restoration of hope. A program I hope can be restored.