[Editor's Note: Former Tyee reporter Christine McLaren is travelling around the world as the resident blogger for the BMW Guggenheim Lab, a mobile think tank investigating solutions to urban problems. This week the project wraps up its three-month run in New York City -- which featured programming by Vancouver author Charles Montgomery -- and will travel next to Berlin, and on to Mumbai. This story originally appeared on the Lab's blog, the Lab|log.]

Almost everyone has a secret pilgrimage destination tucked somewhere in their own personal book of dreams. For many these are, as Ryszard Kapuscinski once wrote, "certain magical names with seductive, colorful associations --Timbuktu, Lalibela, Casablanca." 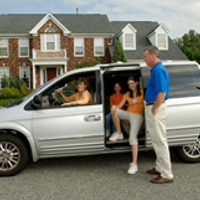 They are places to which we attach wonder, mystique, and fascination; places that we dream of one day exploring, with the subliminal hope of finding an exotic understanding of ourselves, the world, and our place within it.

My secret place is Levittown. I have always wanted to go to Levittown.

My fascination with Levittown is a morbid one. Dubbed the birthplace of the American sprawl suburb and the blueprint from which suburbia as we know it today was built, the town has always inspired ominous music in my mind.

The beginning of suburbia

It started with a modest goal. In 1947 William Levitt and his two sons announced their plan to build 2,000 homes on recently purchased farmland about 30 miles outside of New York.

As thousands of veterans flooded home at the end of World War II with the dream of starting families and settling into a peaceful life, the demand for housing was immense.

Two days after the announcement of the planned community, newspapers reported that 1,000 of the Levitts' homes had already been rented. And when the 2,000th was gone, thousands were still knocking.

And so Levitt and Sons built. They built and built and built, a rumored 30 houses per day, until, fewer than five years later, Levittown boasted over 17,000 tiny, identical, ticky-tacky boxes, row upon row.

Each, of course, decorated with the most important accessory of all -- parked in the driveway, a four-wheeled ticket to freedom that made it all possible.

So it was much to my own surprise that I found myself travelling to Levittown last week, on the suburban pilgrimage of my dreams, in the most inappropriate of ways: by bicycle.

Perhaps unsurprisingly, Levittown is neither easy nor pleasant to reach by bike. But my travelling companion (probably the only person in the world more excited to visit Levittown than I -- Greg Greene, director of the award-winning documentary The End of Suburbia) and I were up for the challenge.

Indeed, no pilgrimage is complete without a fair amount of hardship.

After a 45-minute ride on the Long Island Railroad, we found ourselves dropped in the appropriately named Garden City -- a lovely pre-war railway suburb boasting the name of the movement that communities of its type were a part of: town-country living with all the benefits of the nearby city and none of the hardships.

We mounted our bikes and wheeled our way along the shady streets lined by stately homes with modestly sweeping manicured lawns.

We pedaled until we came to an abruptly unpleasant intersection, a T-bone capped by a tundra-like parking lot framing a distant strip of big-box nodes.

"I guess this is our turn," Greg said. I glanced at my directions, gave him a nod, and pushed off into the stream of traffic heading east.

The misery of the ride thrilled me. I had, after all, come to reaffirm my contempt for suburban living at its root, and as we pedaled mile after mile the journey became, as Greg yelled gleefully from behind me over the roar of motors, "awfuler and awfuler."

A four-lane street gave way to a six-lane highway and we slammed our brakes in narrow misses attempting to cross cloverleaf off-ramps.

Hollowed-out strip malls began to line the margins of the highway -- strings of shabby-looking businesses offering discount Halloween costumes, great deals on pet supplies, and 10 pieces of fried chicken for only $7.99.

We moved from the road to the malls' great linear swaths of asphalt lots -- hopping curbs from one to the next to avoid the traffic that was beginning to terrify us, making us wonder if this was such a good idea after all.

Then we saw it in the distance. Just below the crest of a sloping intersection, a baby-blue sign glinting in the late afternoon sun, bearing the swooping white letters we’d been waiting for: "Levittown Welcomes You."

'We tried to hate it'

I shrieked when I saw my first white-picket fence.

"Quick Greg, take a photo!" I called out.

"Don't worry, there will be more," he said. And he was right.

We sailed through the gracefully arching streets, from Pasture Lane, to Rolling Lane, to Pebble Lane, to Shelter Lane, past the long, flat, single-story Wisdom Lane Middle School, where students boarding a bright yellow school bus waved at us through the window.

And we tried to hate it. We really did.

"The houses look all the same!" we said cynically. But they really didn't.

After more than 60 years, nearly every house had been modified, added onto, somehow retrofitted to the individual needs of the families who lived there. Some had front awnings, some second floors, or extra garage space added onto the side. Some had erected fences or now overgrown hedges, or planted extra trees.

And they were small, a modest 1,200 square feet at the very most with additions -- a far stretch from the 3,000-square-foot McMansions we've come to associate with modern suburbia.

And the trees that had been planted 60 years ago? They were big: broad grown-in umbrellas bearing tree forts and shading the slightly cracked sidewalks.

"It's so quiet," I said. The sun had begun to drop in the sky, and the birds' soft chirping was slowly being replaced by the sound of crickets humming in unison.

We'd lost our sarcastic tone. We looked at each other with a hint of embarrassment, as if we'd just shared a moment we both knew we should keep as a secret between the two of us.

Our eyes locked in silent shameful confession: we liked Levittown.

Without speaking much, we steered our bikes back to the turnpike and filtered into the stream of taillights oozing west, glowing red against the deep orange sunset.

And as we waited in the dark for the train that would take us back to the city, I thought about what awaited us when we arrived. The honking, noise, the crush of crowds on the sidewalk, the homeless asking for change, the heavy heat hanging in the air as we would descend to the subway, and the seats we probably wouldn't get once aboard.

I wasn't completely ready for it.

In the heart of suburban darkness, enlightenment

I had come to Levittown expecting to find grounds for my dislike of what it had borne -- an even firmer base for my steadfast urbanity, appreciation for rurality, and disdain for everything in between.

But really, it made me feel empathetic. It helped me understand not only how but why we got to where we are now.

It makes sense that the first of thousands of suburbs was built outside of New York, I realized. After years in the battlefield, who would want city life that puts every sense under attack?

The suburbs of today are not like Levittown. They are not grown in, they are not modest, nor are they built to last 60 years.

Yes, Levittown is completely constructed on the assumption of individual automobile use. It is the skeleton of a development trend we now know to be one of the most environmentally and financially destructive in American history.

But the meat around those bones was simple, meager even, in 1947 -- a mere 750 square feet of freedom, independence, peace, and quiet.

It was time, greed, and the irresponsible abuse of abundance that morphed the early suburban impulse into the monstrous sprawl that we know today.

Watch highlights of the pilgrimage, filmed and edited by The End of Suburbia's brilliant and talented Greg Greene, above.