A few days ago, I encountered a man in the park. He was walking a dog off leash, smoking an unfiltered cigarette and looking vaguely bohemian. To my joke about violating several bylaws, he responded with a delightful French accent: "Why? It is not marijuana!" It turned out that he was visiting East Vancouver from Corsica. 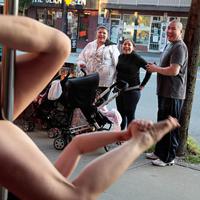 When he resumed his stroll, leaving behind the distinctive aroma of his Gitanes Brunes, I felt a pang of envy. Have we been bylawed into submissive greyness? Or does the Commercial Drive area still resemble, even slightly (allowing for time and space remoteness), early 20th century Montparnasse, where Canadian Morley Callaghan hung out and got drunk with Ernest Hemingway before either of them managed to publish anything?

Should we dare to expect as much as Marc Chagall, when he explained why he had settled in Montparnasse: "I aspired to see with my own eyes what I had heard of from so far away: this revolution of the eye, this rotation of colours, which spontaneously and astutely merge with one another in a flow of conceived lines. That could not be seen in my town. The sun of Art then shone only on Paris."

Is there a critical mass of artists and other imaginative individuals in East Vancouver to inspire each other, to argue, to fight and to make up, and in general, to endow the Drive with a creative bohemian environment attracting intellectual and artistic life?

Vancouver's documentary photographer and portraitist Frank Vena explores these questions and more in his latest body of work, The Drive Project (the title refers to both Commercial Drive -- the locus of the project, and to the "drive" of artists to practice their discipline).

Vena's approach is unique. He uses the subjects as co-art directors for their own portraits. The images are the result of a collaboration of creative talents in front of and behind the camera. Throughout this interaction, the subject's individuality is imprinted into an image that is simultaneously informative and symbolic.

As observed by filmmaker Guy Bennett: "Frank Vena is the first photographer who expressed interest in the arc of my life, rather than just the thing I am currently promoting. After telling him that I began my career as a shipyard welder, he arranged to do a photo shoot in the same shipyard I worked in 30 years earlier, wearing a suit, holding an oxyacetylene torch, standing in front of a tugboat. It was the first time in my life I have ever stood in front of a camera and NOT felt like a bore and a fraud."

The creative cooperation will continue at the exhibition's opening night reception.

The photo exhibition runs from Oct. 13 to Nov. 6 at The Cultch. The exhibition will be free to the general public. Admission to the performances at the opening is $14 ($10 students).