Natalie Dinsdale is studying for her masters degree in biological sciences at Simon Fraser University. On some fair afternoons on Vancouver's Commercial Drive she makes money while relaxing her mind and tuning up her body. She is a busker of an extraordinary kind, capable of stopping traffic while she performs on her own portable pole. I took some photographs of her act, and interviewed her on a break. Here is what she had to say: 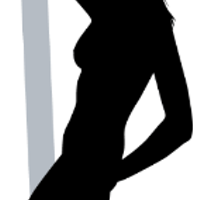 Pole Dancing Is the Hot Class at UBC

On how she got the idea for street pole performing:

"I first had the idea in Edmonton -- every now and then when my pole dancing friends and I would be out and about we'd end up pole dancing on a street sign and playing around. Pole dancing has definitely gotten very popular over the years, but in terms of performing, there aren't many places to do it. I love to perform for an audience, so I figured if I couldn't find somewhere to dance [other than a strip club], I might as well just make space for it.

"Moving to Vancouver and being surrounded by so many people that courageously pursue their own creative endeavours while supporting me in my own gave me the little kick I needed to purchase the portable pole. Having my own pole broadened my ability to market myself as a performer in unique venues. For example, this past summer, I pole danced for Shpongle's set at Motion Notion and for Calvertron and Freaky Flow's sets at Astral Harvest."

On how she acquired the skills:

"I grew up taking jazz, tap, and ballet lessons, so dance has been a big part of my life for some time. When I was living in Edmonton, I danced on the Edmonton Rush [professional lacrosse] dance team and through that, met a woman who was teaching pole dancing and sensual fitness at Aradia Fitness. I checked out the studio, connected with the vision of the company and got hired as a pole dancing fitness instructor.

"I taught pole dancing for four years in Edmonton and received all of my training through the company I worked for. When I moved to Vancouver to begin my master's degree, I was missing pole dancing a lot and wanted to get back into it, especially from a performance aspect -- which is really my passion.

"Given that stripping/exotic dancing is the main realm for pole dancing, I figured an outdoor busking act would provide a nice (clothed) alternative that would raise a few eyebrows and inspire authentic sensual expression on the streets of Vancouver." 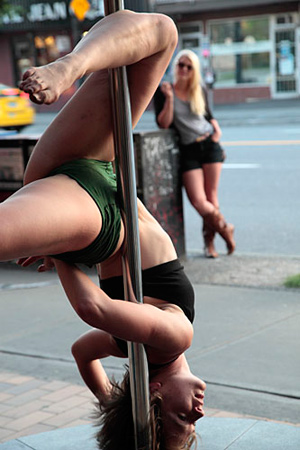 "Money was definitely not the prime motive, but extra cash certainly helps. I'm a full time graduate student so I'm funded for school, but not much. Finding new environments in which to bring my favourite style of dance into the public was my main motivation."

On why she performs to classical music on violin:

"When I first met my busking partner Johannes, through a lovely mutual friend of ours, he told me some inspiring and wild stories about a circus troupe he had played violin with in San Francisco. Given our similar sense of humour and interest in pushing the boundaries a bit, I asked him to join my pole dancing busking act as the musical accompaniment.

"At that point, I had the busking license and the pole but nothing else planned, really. We agreed that the violin provides an unexpected grace and sensuality to an art that most people associate with seedy clubs and bad music. We jammed together a few times at my house before we hit the streets and found it easy to inspire each other and build from each other's energy."

On the public's reception:

"Overall, we've been well received. Many women were like, teach me to do that! Young kids were wide-eyed and thought it was pretty cool to see someone hanging upside down. Some people were shy and avoided eye contact. The most inspiring was one middle-aged Asian lady, perhaps Cambodian. She stopped, watched for a long of time, then she knelt in prayer and kissed the ground before dropping a $20 bill in Johannes' violin case."

"Though pole dancing on the street may be perceived by many as rather distant from spiritual practice, to myself and perhaps to individuals of other cultural/religious backgrounds (like the woman I mentioned earlier) there is nothing more spiritual than sharing your honest creative expression with the surrounding community."

On whether she has forfeited a future political career because she pole danced in public: 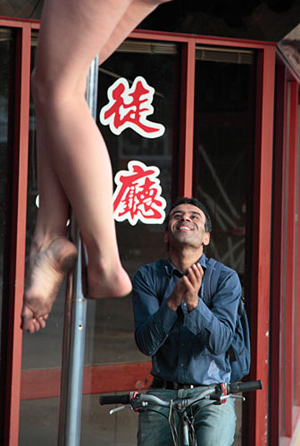 "First of all, I think that the political and social landscape in 10 years will be vastly different from where it is now. I think that a great leader is someone who is courageous enough to deviate from accepted boundaries while not taking herself too seriously. And who knows, a political platform asserting healthy and authentic sensual expression could be very popular by the time I'm ready to try out a new career."

On being a role model:

"Many women really appreciate how the artistic, creative and sensual side of pole dancing mixes so well with fitness. After all, that is how I got into pole dancing myself. When women see other women being playful with something like dancing that brings joy in addition to health benefits, I think they get a little curious and wonder, 'Could I do that?' One of my goals through my dancing is to transform that wondering into a belief that 'Yes, I could certainly do that!'"

On being asked on a date:

"A lot of people assume that I get a lot of male attention from my performances, but I haven't had any serious propositions yet."