[In a piece yesterday from Theodore Fontaine's memoir Broken Circle, the author introduced us to his friend nicknamed Chubby, telling how, as adults, their first, tentative sharing of remembered experiences in residential school set Fontaine on the path towards healing. In this second and last excerpt, Fontaine describes how their friendship deepened, as did his strength to come to terms with the damage he, Chubby and others had endured. Click here to read the part one.] 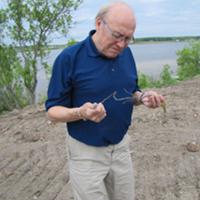 After Residential School, My Path to Healing

Over time, Chubb and I dug deeper into comparisons of our experiences.

Questions of healing or compensation weren't even remote ideas then. We were just letting it out and were comfortable talking about how we felt about being in that school, that it was not right and that it was a bad experience. When you live your whole life with the idea that you experienced something unnatural, and if you don't have an outlet or place to dump the garbage, you begin to wonder if it happened at all. I'm thankful that I found Chubb again. Otherwise my life may have ended abruptly in some disastrous way or I may never have begun the work toward healing.

From that time at Octopus Lake and on, we provided a mutual outlet for each other, small as it was and although verbal communication was never our strongest attribute. Our conversations brought us closer together, but it was years before either of us could bring up the topic with others, even in our own families. It was another 14 or 15 years before the residential school experience became a hot issue in Canada and attracted the attention of the public and the media.

Suddenly out in the open

It was our cousin Phil, who had recently been elected Grand Chief of Manitoba and was getting attention in the media, who shocked a young audience and a reporter in 1990 by saying he'd been sexually abused at the Fort Alexander Indian Residential School. All the rumours, innuendo and hidden shame of former students were suddenly out in the open.

I remember Allan saying, "You know, Chubb, I get very perplexed at the idea that our parents would send us to a place like that when everything we needed to know and learn was available anywhere and we were just as smart as anyone else and probably smarter than most of those people who came to teach us." (English wasn't our first language, and having re-learned Ojibway quite well by then, this and other conversations were all in Ojibway; I'm paraphrasing in English as accurately as I can.)

One of Chubb's all-time peeves was government people talking to Indian people as if we were children and having the attitude that they could say anything that suited them and we would believe them. He scoffed at the idea of their thinking they were saying something useful. He believed that government authorities and long-winded, trivial conversations and/or orders from them could be worked around or ignored. I smile when I think about his voice and tone when he expressed himself in this way.

I still find that as First Nations people we struggle with dialogue and discussion, even within our own families. This is a characteristic that might be inherent in all First Nations in both Canada and the United States.

Chubb's philosophy was that if something important was going to be said, someone would say it eventually.

I often heard him use the Ojibway phrase mungi too nay ("big mouth") to describe a government official or opinionated person at a community council meeting. Sometimes, in my cockiness and wanting to be recognized at functions or meetings, I too have said something aggressively, whether it made sense or not, then caught myself with a self-admonishing "Boy, ni mungi too nay! ('Boy, do I have a big mouth!')" And then I'd remember Chubb, and his down-to-earth sense and wisdom. It's unfortunate that his star didn't begin to shine brightly until he began to shed the garbage left by his residential school experience.

He was a simple man but also very complex in nature. His way of dealing with his residential school experience and the healing path he utilized would have been a model for what could be done through holistic healing. Although he learned to express his feelings more deeply and openly than anyone I know in our family on Dad's side, he had difficulty expressing love for others.

Often a quietness would come over him and he'd gnaw and bite off little pieces of skin from his knuckles and finger joints and be lost in himself. 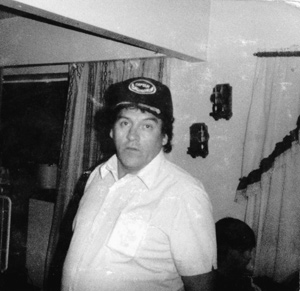 Theodore Fontaine's cousin, nicknamed Chubby, whose special bond as a co-survivor of residential school formed the basis of a long and healing friendship.

You could see in his eyes that some memory was playing in his mind. I'd sit and stare at him, and Chubb would be completely oblivious until he came out of his trance and exclaimed, "Yok-i-nane? ('What is it?')" I'd answer, "Ah Pizan-a-bin," an expression that means something like "Oh, be quiet" or "Oh, forget about it."

Not until he was close to death did he actually use the word "love," and the closest for me was when he'd call me his little Chubby brother and ask if I needed anything -- not as an empty, polite offer, but as a genuine expression of caring and wanting to do something for me. I used to suffer in silence on the numerous occasions when he insisted on buying me lunch or dinner at a greasy spoon. I didn't argue because it was his treat and he was doing something for me. It's incredible that it took more than 10 years from our second encounter as adults to come to the comfortable relationship we had at that point.

I spent the evening with Chubb at Assiniboia Downs racetrack in Winnipeg on a Wednesday night in 1997, enjoying the ponies and a light snack. Throughout the evening Chubb experienced blurred vision, weakness and exhaustion, and he wasn't his usual jovial self. He left before the races were half over. We arranged to meet again on Father's Day, Sunday. He was to bring his sons, his brother Henry and Henry's sons. "I'll see you Sunday around noon, Chubb," were the last words he said to me. My cousin and friend died of a massive heart attack two days later, walking up the bank from the Winnipeg River to his home.

The phone call late Friday afternoon buckled my knees and took my breath away. The talks we'd had and his sudden death strengthened and crystallized my resolve to work on the issue of residential schools and what I'd experienced in my years at the Fort Alexander school. Perhaps Chubb left me in order to give me time to accept and assess the experience with understanding and less anger.

In spite of his leaving me when we had just opened the door to discuss this issue, his departure caused me to delve into the issue more deeply, to understand and to expedite what I needed to do for my healing.

Chubb's early death also meant that he couldn't benefit from the proceeds of the subsequent class action lawsuit, which culminated in a national settlement agreement.

Other people at the graveyard at Fort Alexander have probably wondered why I talk to myself when I'm visiting there. While I pray at the markers for Mom and Dad, my brothers, sister and others, I actually carry on a one-sided conversation with Chubb and bring him up to date on my healing journey.