So apparently not only are the Vancouver Canucks not "Canada's team," but Vancouver isn't actually Canadian. 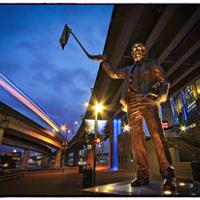 Puck Luck and the Vancouver Canucks

It started with a couple of writers for Toronto's two allegedly national newspapers trying to stir the pot -- or as we prefer to call it in B.C., "bud" -- by listing off reasons not to cheer for the Canucks.

But by the time the New York Times latched onto the story people had begun questioning whether Vancouver was still part of Confederation. Perhaps if Sarah Palin becomes America's president we can create a country with L.A. and New York since the moose-hunting hockey mom declared they're not part of the "real America." No wonder people are so excited about Winnipeg potentially taking over the Atlanta Thrashers -- that way Canada will be back to having six teams.

It's not too surprising to hear the Canucks aren't Canada's hockey team, they're certainly not Hockey Night in Canada's hockey team. That's apparent watching CBC war correspondent Don Cherry gleefully mangle the names of Kevin Bieksa and Roberto Luongo. Part of the former hockey commentator's shtick has always been mispronouncing the names of players from other countries and/or "distinct societies," but he generally seems to make an effort with good old English Canadian boys.

But apparently it doesn't matter that Bieksa hails from Grimsby and Luuuuu was born and raised in Montreal -- if they're wearing the whale on their jersey, their names aren't worth learning. This is the same cornered coach who dubbed Canucks' superstar Pavel Bure, "a little weasel."

Cherry's side-kicker Ron "The Ref's Always Right" MacLean spent a whole segment last season dissecting the play of Canucks' left winger Alexandre Burrows with a savage righteousness not seen on TV since Edward R. Murrow's evisceration of Senator Joe McCarthy (who played right wing). The Canucks were so impressed with the coverage that they briefly boycotted interviews on Canada's iconic hockey showcase.

In the Times piece, André Richelieu, a professor of marketing at Université Laval, declared the Canucks a "regional brand" and said if Vancouver faced off against Tampa Bay, "a lot of Quebecers would support the Lightning, just as they did in 2004 against the Calgary Flames. They have Martin St. Louis, Vincent Lecavalier -- even the coach, Guy Boucher. That has a strong resonance here in Quebec." Unlike the Canucks who have Burrows, Maxime Lapierre and coach, Alain Vigneault.

The Edmonton Sun ran a reader poll where 55 per cent of respondents from the City of Former Champions declared they were rooting for anybody but Vancouver.

As a lifelong Canucks fan who has cheered (at least once) for every Canadian team in the playoffs, I'm disappointed by the national diss, but not surprised. Since the Oilers era ended Canadian Cup contenders have usually been underdogs, and this year the Canucks have been Vegas favourites since before the first puck dropped. The Globe's Gary Mason suggested that's why some Canadians are experiencing schadenfreude, which is German for, "the Leafs won't win another Cup 'til Bill Barilko comes back as a zombie and eats the brains of at least one member of the Tragically Hip." He also repeated the case against the Canucks that the team has fewer Canadians in the lineup than the Sharks and, I suppose, that the ones we do have aren't pure laine.

The temptation is to respond by rattling off all the Canadians on the roster and pointing out that there's at least one player from every province west of New Brunswick. But to me the player who says the most about what kind of team the Canucks are -- and have been for decades -- isn't our gold-medal-winning Canadian goalie, but Jannik Hansen, the first Dane ever to get a point in an NHL playoff game.

The 1978 Canucks started three Swedes -- Thomas Gradin and a pair of Larses -- Zetterstrom and Lindgren. Gradin still scouts Europe for the Canucks and his wacky ideas for potential draftees included the Sedins and Alex Edler.

In the 1990s while Harold Ballard was vowing that no Russian would ever be allowed to disgrace a Maple Leaf uniform by scoring goals and winning games, the Canucks were Team Glasnost, outfitting Igor Larionov and Vladimir Krutov in black and gold pyjamas. The Canucks drafted Larionov in '85 when the chances of a Russian playing for an NHL team were more remote than an NHL team playing in Florida.

During the 2010 Olympics, the Canucks had seven players named to their respective national teams and the Swedish general manager was mercilessly abused for not including Mikael Samuelsson in his line up. Only one team had more players in the Olympics, the San Jose Sharks -- with eight, four on Team Canada. The Canucks had to settle for seven players, spread across six teams. And the Canucks weren't just on the teams, most of them were standouts -- including gold-medal round rivals Ryan Kesler and Roberto Luongo.

So I guess that means if the Canucks can't be Canada's team, they'll just have to settle for being the world's.