The first thing you see when you open the app Find the Birds is an animated character with a small backpack and binoculars. The perspective quickly switches to a view through the binoculars. A black bird with a brilliant orange beak then flits across the screen: the black oystercatcher.

Your goal, as the birder, is to explore Tofino, finding 10 different species of birds. You also go on an ocean voyage to find the elusive black footed albatross — and are challenged to complete a conservation quest, ridding the ocean of plastic debris, along the way.

Tofino and the Pacific Ocean joins the Okanagan as the B.C. locations featured in Find the Birds. The game also features a habitat in Arizona, where users can search for the critically endangered California condor. And most recently, the game launched Japanese locations in Fuji, Hokkaido and Okinawa.

In essence, Adam Dhalla says, it’s a sort of Pokémon for birds.

Seventeen-year-old Dhalla, who developed the game with his father, A.J., was responsible for designing and drawing concept artwork for all the birds.

He also supplied the information on bird behaviour and habitat, knowledge fuelled by over a decade of bird watching, a hobby he began in the winter of 2013 when snowy owls uncharacteristically descended on the streets of Vancouver.

Dhalla is a bit of a go-getter. He’s already written a textbook on machine learning, spends his evenings writing a novel (a long-form poem on ants) and is the recipient of a full-ride scholarship to whatever university he wants, textbooks included.

His mind seems to run at double-speed, his speech effortlessly transitioning between the specific structures of the plant life that surround us to mathematical theorems to the philosophy and ethics of Dostoevsky.

As Dhalla’s passion for birding grew — at one point he had seen over 900 different species of birds — so too did his interest in nature.

“To be interested in anything living is to be interested in birds,” he says, as we walk through Rocky Point Park in Port Moody and he listens to the rustling trees and points out the call of the song sparrow, “a dull little bird with a beautiful sound.”

Soon Dhalla noticed that there were few other kids who liked birding. He saw this as indicative of a more disturbing trend: his generation may be in danger of losing the ability to slow down and connect with nature.

“Everything is bite-sized now,” he says. “And noticing nature is completely opposed to that. You have to look at a bush for hours. You have to walk in the forest without earbuds in.”

He also noticed that there were no birding games — that is, if you exclude the wildly popular Angry Birds.

He created Find the Birds to introduce users to nature accurately, without demanding the patience of real birdwatching.

Dhalla hopes that the game will encourage users to head outside and search for the real-life versions of their pixelated, feathered friends — “screentime to greentime,” as he puts it.

And in some respects, it has been successful.

The game currently has about 10,000 users from over 47 different countries, with an average rating of 4.8 on the Apple App Store. In a survey, 98 per cent of respondents who played the game said that their interest in birds and conversation had increased.

But Adam still fights with the demands of time, especially in the gaming industry where success is determined by how “engaged” users are — basically, how many hours they spend using the app.

If the ultimate goal of Find the Birds is to get people off screens, then the game’s success will look far different than that of mobile games like Angry Birds, where eyeballs glued to screens is the general objective.

This paradox reminds Dhalla of the peak of his own birding days, when his passion for birds morphed into an obsession where he would travel the globe for a single sighting.

A.J. Dhalla remembers how people would laugh when they saw Adam: a petite 12-year-old carrying a camera and lens almost half the size of his body.

A.J. Dhalla also remembers racing down to Washington state in search of a Code 5: the birding term for a rare sighting. The bird was a swallow-tailed gull, its natural habitat the Galapagos Islands. Sneaking onto a beach just north of Seattle, Adam caught sight of its grey feathers and black, hooked beak and he added it to his “life list” of sighted birds. But there were also times when Adam and A.J. piled into the car and raced down freeways and across borders only to see nothing in return.

“Between the ages of eight and 12, Adam was obsessed with every single bird,” A.J. Dhalla says.

Adam’s obsession was not unique. Jonathan Franzen, one of the literary world’s most famous birders, once wrote for the New Yorker that to catch the glimpse of a bird was to feel “connected to a nicely calibrated drip of speed.”

There’s also the Big Year, an annual birding competition where birders compete to see the most species of birds in North America. The fiercest year was ’98, when one of the main competitors lived for three days in the Dakotas, surviving entirely on one jar of peanut butter and one bag of pretzels — just to see a single bird.

The Big Year remains a huge event, except that technology has evolved. Where they once relied on pagers, birders now rely on Twitter to get information about sightings, which are then logged into apps and celebrated, lauded and envied on social media.

This frenzied birding has its drawbacks. A.J. thinks about the carbon emitted driving across borders or flying to Costa Rica. He also thinks about the stress caused by the sport — both for the watcher and those being watched.

“In the end, it’s not great for conservation,” he says.

For both modern birding and the Dhalla app, tools of the modern era are being used to spark interest in an old-school hobby.

But both also suffer from the same flipside: how do people navigate this technology’s tendency to push us towards seeking instant gratification, validation and consumption?

In other words: will Find the Birds encourage people to go outdoors, or will it only serve to further attach users to their screens?

Adam believes the approach they’ve taken with the app will mitigate this. The game is slow-paced, and it is not limitless. It’s also non-profit, and links users to other organizations where they can volunteer in conservation.

Adam has also heard stories from older birders who have used the game as a way to connect with their kids and grandkids. After using the app, these users said, they all headed to the forest together, binoculars in hand. 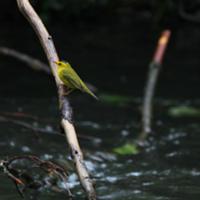 As our interview comes to a close, Adam says that he needs to show me something. He pulls out his iPhone and plays the call of the Swainson’s thrush, a bird that migrates from Central America and arrives in B.C. in May. It starts singing in June.

The sound is immediately familiar — a Vancouver summertime soundtrack. Adam often hears it in the mornings on his way to class. He always stops and listens, aware he’s running late but appreciating that precious moment in time.

“Birds make this world infinitely richer with their presence,” he says. “Many may only notice them when they're gone. And if we lose them, what’s the point? Then it all just becomes right angles and concrete.”