I ran down to Sunset Beach this afternoon when I heard high winds and a strong tide had closed part of the seawall. Just like on Nov. 15, the day the famous barge washed up to shore, part of the seawall was underwater — but this time, dramatic waves were also breaking over it, spraying my face with a fine mist.

The tide was the highest I’ve ever seen it, and I was reminded of all the comments I’d heard from people who came by to look at the barge delivered by the stormy ocean last November: “I’ve lived here all my life, and I’ve never seen this.”

That’s something we’re going to say a lot from now on.

I live in an apartment just steps away from the north end of the Burrard Bridge, and when things happen on Vancouver’s famous seawall, I’ve got a front row seat. So when I saw the video on Twitter of an enormous barge being blown towards the bridge last year, I went out to get a look.

By then, the barge had washed up at a small beach just west of Sunset. My family calls this little driftwood-strewn area “Kid’s Beach” because my kids loved to play there when they were toddlers.

Now, a hulking red barge had firmly lodged itself on the rocks.

The fall storm that deposited the wayward barge on Vancouver’s seawall had wrought havoc throughout southern B.C. It dumped a month’s worth of rain in one day and caused catastrophic flooding across the Fraser Valley and into the Interior, snapping the Coquihalla Highway like a twig. 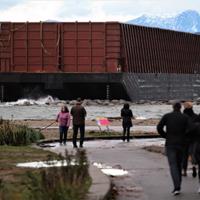 That was less than six months after the June heat dome, where temperatures as high as 13 degrees above normal in B.C. resulted in over 500 deaths. I watched in disbelief as the wildfire that destroyed the town of Lytton followed, realizing disasters like this will become more frequent with human-caused climate change.

Amidst all the devastation this year in B.C., the barge arrived, too large, in the wrong spot, and then stayed put like a clueless guest who didn’t notice the party was over and the host wanted to go to bed.

The barge has spawned countless memes and social media jokes, and (of course) outrage at making light of something serious. The barge’s fame only grew when the Park Board put up a “Barge Chilling Beach” sign that drew crowds of selfie-seekers and international media coverage. Someone spray-painted a hən̓q̓əmin̓əm word on the sign last week, sparking discussions about Indigenous placenames and Vancouver landmarks.

The barge has loomed large in my own life. It’s become a destination for pandemic walks, and when friends from other parts of the city come to visit, I’m happy to act as a tour guide. I’ve taken countless photos of it, in all kinds of weather. On New Year’s Day, I plunged into the water at Sunset Beach, the barge there in the background.

The barge has been personified as a lovelorn admirer of the Burrard Bridge, an awkward interloper, and a new resident of Vancouver’s dense West End neighbourhood. When the city attempted to move the barge, someone made a shrine, complete with flowers, framed photos, a candle and a handwritten letter. The shrine was premature: the barge could not be moved.

Just like the day the barge first arrived, I still jump up and run down to check on the barge when I see a report that something new is happening. It might be weird that our city has embraced a symbol of climate change, but it’s hard not to chuckle when you see this industrial workhorse of the sea stranded on a West End beach.

The barge is out of sorts, and so are we.