When I first moved to Vancouver in the summer of Expo 86, you could rent an apartment in the city’s West End for a few hundred dollars.

Some who’ve lived here for a long time can recount with a certain mistiness their first apartment: a two-bedroom, parquet-floored marvel with a clawfoot tub and leaded-glass French doors. All for the grand sum of $300 a month.

They share stories of ancient hippy landlords, who raised the rent by $15 and then recanted, saying, “If you can’t pay it, don’t worry about it for a few months, OK?” Giant old places that retained their charm despite the wear and tear of decades of renters.

These things don’t really exist anymore in this ruthless city of ours.

Over the years, as the prices began to rise, people got creative. I’ve lived in some pretty odd places — apartments no bigger than a ship’s cabin, renovated storefronts, co-ops; with roommates, with siblings, with a partner, with a kid, on my own. It’s a long list.

The last time I looked for an apartment was more than 10 years ago. My son Louis was in Grade 5. We searched everywhere in the immediate neighbourhood and couldn’t find a thing. Even a decade ago, “affordable” on the west side of town wasn’t happening, so we went east.

At the time, I’d never been much beyond Main Street and had only the vaguest idea where Renfrew was. Over by the PNE? But there was a suite, the bottom half of a Vancouver Special. It was big, cheap and right next to a school, so we took it. And there we stayed, but always with the notion that it was going to be temporary.

The couple who owned the house were elderly when we moved in. The years that Louis and I lived there were happy. At Christmas, we traded boxes of Purdy’s chocolates with the owners and accommodated each other’s quirks.

But the fact that they’d put the house up for sale was always on the horizon. Every time I talked to their son, he’d bring it up, until eventually the feeling of dread that it kicked off in my gut got worn out from overuse.

And then it finally happened. One morning there was real-estate sign on the front lawn, and a week later the house was sold. The new owners sent over the paperwork with an eviction date, and that was that.

Eviction is something of a rite of passage in Vancouver. It’s happened to many people I know. As my hairdresser cheerfully informed me, “I just keep moving from renovicted house to renovicted house.”

When you’re younger and a bit more elastic, you can often bounce along with this kind of upheaval. But it gets harder as you get older.

“Don’t feel sorry for your dumb self. You knew this was coming,” I thought as I scanned the Craigslist rental ads. But a mournful void opened up in my stomach. I couldn’t help but feel that this situation was my fault. After all, I’ve made my own decisions in life.

But of course, there are bigger forces at work. Along with practically every other major urban centre, the price of living in Vancouver went sky high and then kept on rising. I think it’s somewhere in the vicinity of Pluto at the moment.

Although Vancouver is still the reigning diva of expense, the same thing is happening across the country. Even the famed cheapness of Montreal isn’t quite what it once was.

But all of the endless analysis about why this is doesn’t really amount to much when it comes down to having a place to live. It’s a practical issue, but it’s also a deeply emotional one. The desire to have a home is somewhere up there with the need for someone to love and work to care about. Fundamental.

I’d forgotten what a serious pain in the ass it is to look for a place. Poring over ads, schlepping it out in the pouring rain to cattle-call appointments with a whole whack of other folk, making nice with landlords, filling out paperwork. Paystubs and references no longer suffice, I’m afraid. Now you must also supply three months of bank statements.

All that effort, and often at the end of it you get a short message saying, “Sorry, the apartment is no longer available. Good luck!”

Actually, if you get a call, you’re lucky. Usually, it’s just dead silence.

Rents and mortgage payments are almost equivalent now. So, do you fork over more than half your salary for rent every month, or do you rob a bank and try to buy something? That’s a whole other kettle of fish, by which I mean mortgages, not robbing banks, although the two can be mistaken for one another. Although I guess the joke is that the bank actually robs you. Ha ha... sob.

Sometimes people think ahead and plan for the future, and sometimes they get lucky and inherit money from a distant aunt in Norway. Many people get into the real estate market with help from their parents, but if you’re a single person of a certain age, with limited years left in your earning life, the options are not great. No matter how many expensive lattes or avocado toasts one skips, saving enough money for a down payment is still a bit of a feat.

So, the system is rigged against poor people. What else is new? Folks who had the money to buy a place in Vancouver when they were cheap as chips, goody for you. But don’t pat yourself on the back too hard. Smugness will get you smacked. By me.

If renting a place is complicated, then buying one is byzantine. The current inventory, meaning the number of places for sale, is at an all-time low. The lowest since they started keeping records of such things. Like anything, one learns the hard way what it means to try to buy something.

What your money can provide in Vancouver and environs is illuminating, to put it mildly. But that’s a whole other story, as yet with no ending, happy or otherwise, in sight. 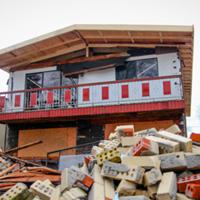 So, the bigger question lingers. Why do I want to live here?

What keeps people in cities, after all? The most obvious answers are the practical things — work, school, services. Then there’s the other squishier stuff — family, friends, community, connection. All of these things can shift radically over time. Kids grow up and move away and work can be done remotely, at least part of the time. So why stay?

If you had asked me this question 20 years ago, I would’ve answered definitively: culture. But even that has changed. The pandemic may have exacerbated the shift to online offerings, but it was well on its way even before that. Access to galleries, museums and theatres is still important, but is it worth paying more money than you ever thought possible to simply exist here?

In the meantime, the search for a home feels like it’s growing harsher and infinitely more competitive, like an enormous game of musical chairs. When the tune stops and everyone is white-knuckle glued to their seat, except for you, what is there left to do but walk away?