With a temperate climate and urban plazas galore, Vancouver naturally became the hotspot for skateboarding in Canada. (Sorry, Toronto! We just don’t have your kind of snow.)

The sport first blossomed further down the coast in the 1950s: Californian surfers were looking for something to do when waves were flat. In the 1960s, skateboarding took off, and in the 1970s, the craze came to Canada.

“There was this sort of greaseball scene — the dudes with the cut-off sleeve jean jackets and the deck of smokes doing one-handed wheelies on 10-speeds with the bars flipped up,” Peter Ducommun told the Vancouver Courier at the 40th anniversary of China Creek. He’s the owner of Canada’s oldest skateboarding brand, Skull Skates.

“People went from being these long-haired greaseballs to chopping their hair off and starting punk rock bands and going to punk rock shows. That was the backdrop that skateboarding kind of grew out of in this town.”

For a look at this history, check out this video by About Here in collaboration with the city’s park board.

The video traces the development of the city’s downtown, with new steps, ledges and railings nestled among its office towers.

But then came the crackdown. In the 1990s, Vancouver, among other cities in North America, wanted to put a stop to “street skating.”

The name described a growing genre of skateboarding that made use of the public realm, but bureaucrats and business owners found it a nuisance — and costly to deal with damages. A cop in the video says skateboards will “hit people in the head, blast through a window.”

And so hostile architecture — metal bumps and other “skate stoppers” — was installed across the city to ward off skateboarders.

If that wasn’t enough, Vancouver even brought on a new bylaw with a fine of $75 to prevent skateboarding on streets, sidewalks and pathways not designed for their use. Skateboarders were ticketed, and their boards confiscated. 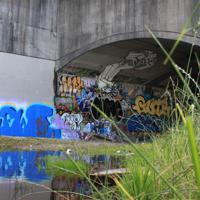 In the 2000s, attitudes began to turn around. The city council of the day recognized how skateboarding was an active form of transportation and a popular form of local recreation. New skate parks were created, and the bylaw was lifted in 2005.

One of the advocates who helped turn things around was Sarah Blyth, who’d later be known for her work as an elected park board commissioner and for drug overdose prevention in the Downtown Eastside.

“A lot of people think teenagers are loud and skate parks are loud and it brings chaos,” Blyth told the Toronto Star. “We had to meet with people and teach them that having young people do something besides just hang around in their basement or be bored with doing things they shouldn’t be doing, why not let them do what they want to do.”

Today, the city is embarking on a skateboard strategy, which will consider new infrastructure in the very public realm that skateboards were ejected from in the past.