“Welcome to the DTES Market,” Marcel Mousseau used to call out to people hesitating at its entrance. “Feel free to come in and browse!”

His cheerful and friendly greeting often enticed the undecided to enter.

Mousseau, who had been a major part of the market since its inception in 2010, was often the first vendor to set up at any of our sites. He was a self-taught Ojibwa artist who made and sold horseshoe dreamcatchers, antler dreamcatchers and leather lighter cases.

He also sold bandanas, even before they became popular as makeshift face masks during the pandemic. On his website, he described artmaking as a “healing tool” that made it possible to explore “inner wisdom, strength and courage.”

Marcel Mousseau passed on July 3, after a short battle with cancer. A memorial was held on July 10, onsite at the market at 62 E. Hastings St., on what would have been his 58th birthday.

His absence is already sorely missed among market vendors and visitors — he was a bright light who believed in the power of art to heal.

“Marcel, at one time, made enough of his lighter cases so that he could hand one out to every vendor as a welcoming gift,” says Rob, a vendor at the market.

Vending was Mousseau’s primary source of income. He sold his smaller pieces at the market and saved his larger works to sell in galleries across Western Canada.

The income he made from vending kept a roof over his head and food in his stomach, along with whatever else he needed. He sent any extra money he made back home to his family, on the Ebb and Flow reserve in Manitoba, where he was from. He also sent artworks he was particularly proud of, like a hand-carved bull moose antler, back home to his family. He said the piece reminded him of the days when they used to hunt.

Mousseau believed that every vendor could make enough money to get their daily essentials.

He designed our old logo when we were known as the Downtown Eastside Market. This logo, featuring a howling wolf, stands on its own, unique, just like our market.

Mousseau was a true ambassador for the market and a generous spirit. If anyone needed anything, he would do his best to make it happen. In 2019, when we were located at 62 E. Hastings St., one of our vendors was homeless and was living in our onsite teepee. Mousseau helped find this vendor a place to live and made sure he had basic essentials.

Mousseau was always doing things like that for anyone who was in need. He helped people figure out how they could make their own money to support themselves. He believed everyone could be self-sufficient.

Sam, who visits the market regularly, bought several small pieces from Mousseau over the years. 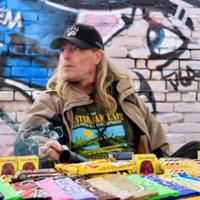 “Having his artwork around me made me feel good,” says Sam. “I especially loved his dreamcatchers. I’ll cherish the pieces I own now [that] they’ve become all that more special.”

Mousseau smudged daily. Afterwards, he would say, “All my relations.” I cannot hear those words without getting emotional.

Mousseau always had a positive word for everyone, regardless of who they were. He helped the market’s setup team every morning, without pay, and he stuck around for teardown at the end of the day, too.

He had a say in everything that involved the market.

Mousseau will truly be missed by everyone at the market, as well as all who knew him.

Wherever the market is moved to next, there will always be a spot, front and centre, in memoriam to him.