The Four Directions Trading Post, formerly known as the Downtown Eastside Street Market, is once again in a transitional phase. Soon, we will be moving to our sixth site.

I’ve been involved with the market for 10 years, first as a vendor, and then as an executive assistant to executive director Constance Barnes. Now, I work part time as well as vend.

Our first site was Pigeon Park, from 2010 to 2014. Vancouver bylaws make street vending illegal in the city, and the market was founded to give people a place to sell their goods without being told to pack up their stuff and move off the street.

Back then, the market was only open Saturdays and Sundays, so vendors were still selling out along East Hastings Street, as they have for years. Eventually, we outgrew Pigeon Park.

Just like Pigeon Park, we outgrew 62 E. Hastings St. Thankfully, another site became available for use on the weekends at 58 W. Hastings St. We switched between weekday and weekend sites until, once again, we were moved from 62 E. Hastings St., this time to make way for a BC Housing redevelopment.

After a short stay at 58 W. Hastings St., we found ourselves once again being displaced in April of this year. The market was about to become homeless if another site wasn’t found soon. At that time, we had approximately 40 full-time vendors and 60 or more part-time vendors, all of whom would once again have to resort to setting up outside on the ground along Hastings.

The market was set up to provide vendors with a safe place to sell their wares to make the extra money they needed to buy food, supplement their monthly cheques, or to earn cash for their addictions.

But whatever the vendors need money for isn’t our concern. Instead, our concern and responsibility is to keep them safe, in a fairly comfortable setting so they are able to earn money for whatever their needs might be. Throughout the years and our moving from site to site, the vendors stick with us.

Now, once again, we are in a transitional stage. We’ve returned to 62 E. Hastings St. while we wait for demolition to be done at our future site, at 26 E. Hastings St. We’ve been told this next site will be ours for about four years.

Some may think that’s a long time, but it’s not really. In two years, we’ll have to start looking for another site unless the City of Vancouver deems the market to be a vital and necessary part of the community and assigns us a permanent site.

Vancouver police are supportive of the market as long as we continue to work with them by keeping stolen merchandise and other illegal activities out of the market. When the market is closed and vendors sell along Hastings Street, then the police usually tell everyone to leave upon threat of confiscating everything on the ground. At times, they have come along with an empty city sanitation truck to use to dispose of items vendors are selling. 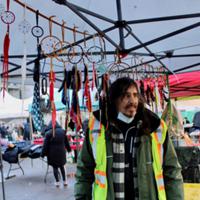 The market also employs peers from the community, who make a small cash honorarium for every shift. The peers set up tents and tables and keep the site clear and free of trash. Security is also done by the peers. They, too, want a permanent home for the market.

If the City of Vancouver doesn’t see us as a contributing and necessary part of the community, then they will just keep us moving from site to site. As the market has grown over the years, the lots available to us that are of sufficient size have become few and far between. And it’s not viable to have the market move outside of the community. It would be inconvenient not only to the vendors, but also to the people who visit and shop.

The Four Directions Trading Post is in need of a permanent home in an open-air environment in the Downtown Eastside. This is what makes us what we are. The atmosphere and overall mood of everyone that visits the market and vendors alike is majorly upbeat and happy. We’ve created our own little family, complete with black sheep who are all accepted without question.

While we fight to find a permanent site we can call our own, we will accordingly adjust and accept the transitions.