The words “Vancouver Special” mean different things to people. If you’re not from the city, you might think it sounds like some shorthand bragging, or maybe cheap eats from a blue-plate diner — two eggs and a slice of wheat toast for $2.99. For folks who live here, it means a big boxy house, built between the late 1960s to mid ‘80s. A little square, kitschy even, but still possessing a certain charm.

Vancouver Special: Disorientations and Echo, a new exhibition at the Vancouver Art Gallery, shares with its namesake a local, vernacular approach — homegrown and idiosyncratic, with deep roots in this part of the world.

The second part of the title makes reference to another aspect, a quality that branches out to encompass a range of cultures, politics and aesthetics. Really you could call it the Vancouver Special Diaspora, circling the globe, picking up other ideas and influences, some familiar and others more destabilizing.

This is a big show in different ways. Five different curators, 32 contemporary artists and a selection of work that runs the gamut from installation to figurative painting, sculpture to photo-based collage. The abundance is fascinating, but the breadth of the ideas all circle back in some way to this place. Call it Vancouver. What’s so special about it?

Vancouver isn’t always an easy place for artists, notes Grant Arnold, the gallery’s Audain Curator of British Columbian Art. The cost of living has spiralled out of reach for many, and a kind of embittered ambivalence about life in the city has settled in.

But the strange thing about artists is that good work can come out of dire circumstances. Even in the midst of what has arguably been one of the most difficult times in what is already a tough town for artists, people have found ways to keep working, producing extraordinary stuff.

Many works featured in the show have never been exhibited before. Some are brand new and were still being installed during the preview. Newness isn’t always easy, and in their introductions some of the curators expressed gratitude to the gallery’s security guards and the conservation department for their work in helping bring the show to fruition. Appreciation for these folks, whose labour isn’t always recognized, is only one indicator that the show is different.

The other indelible signifier is the work itself. Many of the artists living and creating in Vancouver and surrounding communities are young, fresh out of art school and carving names for themselves, and others like Jim Adams, have long and extraordinary careers. Adams, entering his fifth decade as a working artist, is a true revelation.

Originally from Philadelphia, Adams moved to Surrey in the mid-1970s, taught art at Douglas College and currently makes his home in White Rock. His earlier work drew heavily on aviation imagery — jet planes and the like — and the newer paintings feature evolutions in the art of flight. Rockets and space travel, all imbued with a sense of journey, some of it literal, much of it mythic. Of his 10 works included in Vancouver Special, more than half are new. The fact that Adams is almost 78-years-old is startling, but it’s the painting themselves that astound.

The works included in the show feature re-imaginings of ancient mythology with contemporary issues. A painting called Bus Stop (Leda and her Cygnets) become a parable for gun violence. Adams often features himself in his work, portraying himself as Zeus with a freaky looking grizzly bear. The work is a wonderful reminder that figurative painting is not only relevant, it’s ferocious. His images stare straight out from the canvas, locking you into their gaze. But before the relationship becomes a virtual stare-down, humour, compassion and joyous surrealism disrupt the intensity. Liberation ensues.

More than anything, Vancouver Special: Disorientations and Echo is a reminder that art needs to be seen in the flesh. All the Zoom meetings and high-res images in the world don’t hold a candle to coming face to face with a painting or an installation. Scale, form, layout, proximity. The relationships manifested in a gallery require a human body to take them in, feel them and experience them as a lived visceral thing.

In such a large show, it isn’t just the individual painting and sculptures that speak. Sometimes a bigger conversation takes place between different bodies of work talking to each other across the gallery floor. The fission, friction or more slippery cohesions have to be walked through. Lauren Brevner and James Nexw’Kalus-Xwalacktun Harry's Rememory and Simranpreet Anand’s textile installation ਦਸਤਾਰ ਬੰਨ੍ਹਣ ਲਈ ਬਲੂਪ੍ਰਿੰਟ (blueprints for tying a dastaar) are engaged in a lively discourse.

Both of these are major works, and there is a temptation to let their scale and majesty wash over you, but there are subtler things at play. Both take as their wellspring the intimate and bodily role of form and colour offered in traditional dress. The wall-sized image of Rememory, commissioned for the exhibition, combines elements of both artists’ cultural tradition — Indigenous and Japanese. Blue, copper, ochre and pearl feature in the robes of a matriarchal figure, towering benignly over the gallery space.

Simranpreet Anand’s work draws upon the significance of the dastaar, the turban worn in Sikh culture. Sinuous bolts of fabric, marked with different shades of blue that demarcate the folds of cloth, speak to the individual and the cultural in equal measure.

Smaller moments of beauty abound in the show, as Marika St. Rose Yeo’s shattered and rebuilt ceramic sculptures make clear. At first glance it’s easy to think “teacup in a car crash,” but even in destruction great loveliness can occur. Yeo’s sculptural works comprised of broken forms and pattern, pieced painstakingly back together in new iterations, offer up not only new juxtapositions but new ways to see.

Odera Igbokwe’s paintings pull from Afro-futurism and dance, as well as illustration. Enlivened by a spike of self-awareness, a razor-edge of anger and a quality of movement, they are pure pleasure to look at. The Volcano featured in Vancouver Special is illustrative of all these qualities.

In describing the work on their Instagram page, Igbokwe writes: “The Volcano is a new painting that I started last year while contemplating the power of Black rage. So often we can hold onto a festering ball of debilitating anger. But I always remind myself that we as a people have always had the power to transform anger into an anchor centred in love, protection, resilience and justice. If that anchor becomes too heavy, we can transform it into a bouquet of flame and give it away.”

This transformational aspect also informs the paintings of Manuel Axel Strain, a Two-Spirit artist with Musqueam/Simpcw/Syilx heritage. While some of their work is reminiscent of Kent Monkman, there’s cheek and humour to paintings like A White Woman on a Highway that employ both classical technique (oil on canvas) and pointed content. 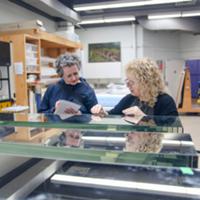 What Goes On in the Hidden Bowels of Vancouver’s Art Gallery?

Another of Strain’s paintings entitled Me cutting through a white lady to reveal my mom picking medicine in our home territory is pretty much what it sounds like. A traditional oil portrait of a woman in 18th-century dress, not unlike something you’d find in the Louvre or the National Gallery, erupts outwardly with the figure of Indigenous woman hard at work. The clash of the two, disruptive and jarring, shakes loose the trailing stuff of the art history to offer something new in its place.

The rest of the show is equally lively, like Charles Campbell’s Tree: Finding Accompong, which makes references not only to the morphology of the human respiratory system but also the torturous history of the Jamaican Maroons. As an artist of Caribbean descent, Campbell’s work deals not only with the forces of history, but also with resilience and hope — not the faint wispy variety but the stuff that must be fought and bled for.

To come into being, the new has to shuck off the weight of old canonized ideas and lope off in different directions. Vancouver Special: Disorientations and Echo does this from the get-go with Carrier Wit’at artist Whess Harman’s epic banner the lowest bar hung on the gallery’s façade. A passionate cri de coeur and a declaration for a better way forward, it speaks to a new even more special place.

'Vancouver Special: Disorientations and Echo' runs until Jan. 2 at the Vancouver Art Gallery.