If you wanted to do drive-in movies the old-fashioned way, you’d cram as many people as possible into a car (including a few in the trunk) and pack giant, grease-spotted grocery bags of homemade popcorn along with bottles of generic soda pop with names like Spronk and Sort-of-Cola. You’d have to pee like a racehorse in the final climactic scene of the film, but that’s the price you pay for all that delicious fizz.

The golden age of drive-in movies, complete with their squawking announcements, raunchy trailers and roving gangs of surly teenagers might be long gone, but for cinemagoers who miss the experience I have good news for you: the DOXA Documentary Film Festival is bringing it back, albeit with a few modern improvements.

The festival is offering its first-ever documentary drive-in at the PNE Amphitheatre. The program runs May 13 to 15 no matter what the heck the weather is doing, with a selection of some of the festival’s most terrific offerings, including Shannon Walsh’s The Gig Is Up, Brishkay Ahmed’s In the Rumbling Belly of Motherland, Bobbi Jo Hart’s Fanny: The Right to Rock, and Paul Sng and Celeste Bell’s Poly Styrene: I Am a Cliché.

Elle-Máijá Tailfeathers’ Kímmapiiyipitssini: The Meaning of Empathy and Sheona McDonald’s Dead Man’s Switch: A Crypto Mystery will also be screened, as well as a matinee presentation of Sean Horlor and Steve J. Adams’s Someone Like Me.

For $50 per car, you and five of your bosom companions can take in some delicious documentary fare.

It’s an eclectic selection of films, but DOXA has made its reputation on the basis of such inimitable combinations. This small slice of programming is indicative of the festival’s approach, bringing together Canadian and international features that run the gamut from issue-driven investigations to auteur originals.

Fanny: The Right to Rock is a case in point. Bobbi Jo Hart’s biography reunites most of the group’s original members for a rollicking road trip into the past of one of rock music’s legendary bands.

Although they were touted as the queens of rock in the 1970s, Fanny faded into obscurity after a series of bad breaks, helped along by the systemic racism and sexism of the music industry.

Hart’s film documents the band’s origin story in admirable fashion, when teenagers June and Jean Millington began performing in the backyard of their home in Sacramento, California. As young Filipina women, the sisters might have seemed unlikely candidates, given the industry’s biases, to scale the heights of rock stardom, but as the chorus of interviews attest — everyone from David Bowie to Bonnie Raitt to Def Leppard’s Joe Elliott — the Millington sisters could really play.

With Jean on bass and June on guitar, and the wonderfully named Brie Darling playing the drums, they formed the band the Svelts. When Darling had a baby, the band took on drummer Alice de Buhr and became Wild Honey. But it was the addition of Nickey Barclay on keyboards, as well as the new name Fanny, that truly precipitated the band’s ascent towards legendary status.

In preparation for their first album, the women ensconced themselves in a rented mansion dubbed Fanny Hill, previously the home of movie star Hedy Lamarr. The place became an instant hangout for musicians and their entourages — Bob Dylan jamming in the basement, Joe Cocker sitting at the kitchen table eating muffins. In addition to their own music, the members of Fanny contributed to influential recordings like Joe Cocker’s Mad Dogs & Englishmen and Barbra Streisand’s Barbra Joan Streisand.

Everything pointed to rock super stardom — an experienced producer, a contract with Warner Bros. Records, and a solid lineup of great musicians — but in spite of everything, fame proved elusive.

The familiar tropes of the rock and roll lifestyle, including endless bouts of touring, studio time, sex, drugs and partying, blend together to form a familiar narrative. As women of colour, some of whom were also gay, Fanny had a hard road to gaining the respect and coverage that male bands received as a default. As members came and went, and none of their albums produced a breakout hit that might have propelled them to greater fame, the band’s early energy began to dissipate.

Although Hart’s film follows the path of many a previous rock doc (Edgeplay, about the Runaways; Who Took the Bomp? about Le Tigre), Fanny is a thoroughly enjoyable romp with a kickass soundtrack.

If you need any further convincing, take a listen to their 1971 hit “Blind Alley.”

Another equally engaging and often downright startling offering is Sheona McDonald’s Dead Man’s Switch: A Crypto Mystery. The story of Vancouver bitcoin entrepreneur Gerald Cotten, who died in mysterious circumstances after losing $250 million of investor money, plays like a thriller — with the most unlikely mastermind at the centre of the story.

Nebbish, nerdy, and affable to a fault, Cotten convinced the bitcoin community that his cryptocurrency exchange QuadrigaCX was a sure bet. But the man wasn’t exactly who he pretended to be. Soon enough, things began to go awry, with funds suddenly becoming inaccessible and the company filing for protection from its creditors. When Cotten died while on his honeymoon in India, many people were convinced that he had somehow faked his death and absconded with the missing money.

Some odd details, such as the fact that he’d written his will only a few days before leaving on his trip, convinced many people that something was fishy. 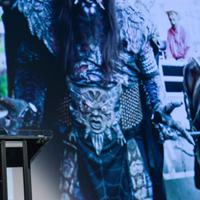 With laser-like precision, McDonald retraces the events leading up to and following Cotten’s demise, helped along by interviews with journalists, cryptocurrency specialists and ordinary folk bilked of their life’s savings. It’s a cautionary tale, as well as a reminder that in spite of technological innovations, the oldest cons are still going strong.

DOXA’s take on the drive-in, offering diverse films that are as entertaining as they are artfully made, is the best snack-bar combo imaginable — popcorn, Twizzlers and soda with a side of entertainment, education and world-changing cinema. And it might just set a precedent, especially as the idea of leaving one’s house to see a movie is unbearably tempting at the moment.