“It’s an area that every… property owner, social worker and police officer has an opinion on, yet, rarely do you hear the voices that come from within,” says the description for a new album featuring music performed by Downtown Eastside residents.

With songs including a wry rock ballad about failed love, a hopeful welcome to new life and a soulful country song about losing a loved one, the album is as diverse as the community.

The album has been a labour of love for Eris Nyx, who first applied for funding a year ago and produced the record, named 100 Block Rock in honour of the 100 block of East Hastings. The album is now available for pre-order in digital form or on vinyl. A concert featuring the musicians will be livestreamed Dec. 11, the same day the record is released. Link here.

“I think creativity is not only a good method for people to deal with themselves and the world, but it's also just aesthetically pleasing — it brings about euphoria, as corny as that sounds,” Nyx said.

“But I guess my underpinning motivation for wanting to do the record was just: ‘Look at all these cool musicians. Wouldn’t it be cool if we did this?’”

Nyx recently moved out of the Downtown Eastside, but she lived there for 10 years and is still involved in groups like the SRO Collaborative and the Coalition of Peers Dismantling the Drug War.

The album comes after a particularly hard year for the Downtown Eastside. The inner-city neighbourhood is dealing with the threat of rising COVID-19 cases, a spike in overdose deaths and the reduction in drop-in spaces and other services as part of pandemic precautions.

In the midst of that struggle and grief, Downtown Eastside musicians went into a studio this September to sing and play their hearts out.

After getting $4,000 in funding from Creative BC, Nyx started to search for musicians, posting on notice boards in community hubs like neighbourhood bars and the Carnegie Community Centre. Around 30 Downtown Eastside residents sent in demos, and then Nyx and a group of community members winnowed that group down to the 11 recordings that made it on to the album.

Fundraising covered the rest of the total $10,000 cost to make the album, including a studio recording session. Nyx and her collaborators also produced extra items that will be available to people who buy a special edition of the album, including a print of the cover art by Ken Foster and a poster designed by graffiti artist Smokey Devil. Any profits will go towards making another album.

“It's really, sincerely our hope [to] keep the project going as an ongoing thing, so long as the neighbourhood [is] still standing,” Nyx said. 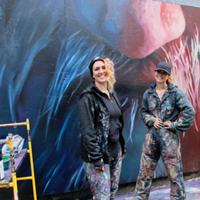 Erica Grant sang 'Go Rest High On That Mountain' with her partner, Grant Houle. The song was a favourite of Grant’s son Duncan, who died this spring. Grant played a drum Duncan had made for her.

“It allows you go over the hurdle of all the negative stuff you’re feeling,” Grant said. “It's a way of letting my emotions out.”

It’s also a way to push back against the negative stereotypes people often have about the neighbourhood.

“There actually is a lot of talent down here, and a lot of caring people down here,” Grant said.

Some of the musicians who perform on the album are amateurs; others worked or work as professional musicians.

“The record itself is a real genre hodgepodge of people at varying levels of skill and history and relationships with music,” Nyx said.

“I would say each artist on the record has their own story and background for what they’re doing.”