Tourists have worries enough this year. But wouldn’t it be just like 2020 to be all worried about COVID-19, only to get munched by a bear? Luckily for me, the bruins I recently met in Manitoba were already having lunch. Not that I didn’t push my luck a little.

On an afternoon in late July, I had just biked over the hill that leads into Riding Mountain National Park when I spotted something dark behind a tree. I had not yet hit the brakes when the black shape turned its head and fixed me with a laconic gaze. It was a black bear, not much more than six feet from the path. Several cubs clustered around her.

I braked like Casey Jones and pulled a desperate U-turn. Dropping the bike, I ducked behind a nearby hillock and crept back towards the little group. The bear, looking blissfully unconcerned, was leaning against the tree while three cubs snuggled in her lap, each suckling from a teat. I had stumbled upon an impromptu family meal.

Beautiful Manitoba holds perils large and small. Mosquitoes of course — they were legion this year — but it’s the ticks hiding in the tall grass that really creep you out. And then way, way up the food chain there is Ursus americanus. In Riding Mountain National Park, bears are a constant presence.

Walking through Vancouver’s Stanley Park after a spell in Manitoba can induce a reflexive jumpiness until one gradually readjusts. Every stroll around Clear Lake is properly made with one’s head on a swivel. And whether or not you give credence to all those “Nature is healing” memes, 2020 does seem to have been a good year for Manitoba bears.

“Currently, there are three known sows, or females, with cubs in the Wasagaming and Onanole area,” says Jodi Duhard, acting public relations and communications officer for the national park, about an hour’s drive north of Brandon. “This means that last summer was a good year for bears to load up on food and to have more eggs implanted. Bears have cubs every second year, so this summer’s bountiful berry crop will likely be good for the overwintering of sows with cubs.” 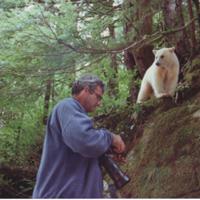 The Man Who Befriended Bears and Worked to Keep Them Safe

Visitors to Riding Mountain (not actually a mountain in any meaningful sense) generally carry noise makers or sing as they walk through the woods, apparently on the assumption that local bears are not as entertainment starved as the rest of us. I was not in the woods though, but a small, manicured park just metres from the centre of town, and the bruin picnic was being held an arm’s length from the paved path. Reassured by the nursing mother’s seeming nonchalance, I reached into my shoulder bag for my Olympus camera and quickly attached a zoom lens. I stood up from behind the grassy mound and began shooting.

I was well aware that this was potentially foolhardy behaviour. Just days before my encounter, a woman jogging at nearby Moon Lake had startled a young bear that clawed her face and back before running off. Nor did I want to treat the bear as a zoo attraction. “It is important for visitors to remember that observing wildlife in their natural habitat comes with a responsibility to treat wildlife with the respect they deserve and need,” says Duhard.

Noted. But with the distance offered by my zoom — and the fact that my subject appeared blithely preoccupied — it seemed to me this was a risk worth taking. How often do we have a chance to see a mother bear nursing cubs? “This activity is rarely witnessed,” Duhard agrees.

Any photos I could get had the potential to upend years of unfounded theories about bears and porridge. I kept shooting.

But the danger did not only cut one way. Human/bear interactions are more often fatal for the bear. Only days after my Clear Lake encounter, a Deep Cove bear known as “Huckleberry” would be killed by conservation officers after being determined to be a danger to locals. It was the locals that created the danger to begin with by giving poor, hapless Huckleberry access to scraps and garbage, in some cases intentionally so as to facilitate social media videos.

Cubs are definitely a complicating factor, Duhard says. “When a mother bear travels with her cubs, the group is much slower to move through the area, thus increasing the potential for crowds to gather.”

Thankfully this feasting family had not drawn a crowd. I was alone in the little green space, keeping one eye out to warn any new arrivals as I continued to shoot from behind the grassy mound. After about 30 seconds, the bear turned to look my way again. Insofar as I am able to interpret ursine facial expressions, she seemed somewhat less relaxed about my presence. Now I could see a bright red plastic tag in her left ear.

Duhard explains that this is not necessarily a sign of trouble. “This particular bear was found and tagged while park staff were working to capture another problem bear a few years ago,” she says. It had been in the area for approximately five to 10 years without any issues. “If people remain vigilant in efforts to contain any food and garbage and respect the bear’s space,” she says, “this sow should not present any concerns.”

Of course, I had potential concerns. Momma Bear was glowering at me now, and it was at least possible that I myself could rapidly become food or garbage. Bad news for me, bad news for the bear family. Was I being foolish and irresponsible? “Taking a photograph from a safe distance of more than 100 metres is acceptable as long as you do not hang around the area,” Duhard says. “Remember, if an animal reacts to you, you are too close.”

That happened. It took a minute or two, but finally Mom had reached her limit. Almost instantaneously she was up on all fours, snorting as the cubs clambered up the tree to safety. The paparazzi session was officially over. I scrambled away to grab my bike and haul ass south.

“Parks Canada takes action to promote coexistence between people and wildlife,” Duhard says. “If you spot wildlife along roadways or in a developed area, always remember to photograph or film from a safe distance, the safety of a vehicle, or from a designated observation area.”

Good advice, but as the Moon Lake hiker learned, not always possible. As for me, had I not spotted that black smudge behind the tree I would have passed almost within swatting distance of this mother bear and her feeding cubs.

Once safely down the path, I looked back for a last view as the bear ambled off to the east, her brood following. I only hope their little tummies weren’t rumbling. Visitors really shouldn’t show up unannounced in the middle of dinner.