A new anthem of anger and change, rage and sorrow is sweeping the planet.

Un Violador en Tu Camino (A Rapist in Your Path), written by the Chilean feminist collective Las Tesis, was created in reaction to increasing sexual violence in Chile.

A video of a performance on the International Day for the Elimination of Violence Against Women went viral, and soon the song, with its dance steps and gestures, was being performed on the streets of Paris, Calgary, Los Angeles and New York City.

Other protests in Lebanon, India and Mexico adopted the song. Women in the Turkish Parliament used it to highlight the country’s spiralling rates of domestic violence. And more than 100 women sang it last month on the steps of the New York courthouse where Harvey Weinstein was on trial.

Un Violador en Tu Camino is a global phenomenon. It’s just one example of how, from political rallies in the U.S. to Indigenous resistance in B.C.’s north, the power of anger channelled into song is taking centre stage.

The song’s lyrics are simple and direct, indicting not only perpetrators of violence but the systems that sustain and protect them — the police, the judiciary and the politicians. “It’s the cops / the judges / the state / the president. It wasn’t my fault; not where I was, not how I dressed… The rapist is you!”

In the Chile version, green scarves are worn to denote access to reproductive rights. Blindfolds reference police blinding Chilean protesters. The dancers squat, mimicking the position they’re forced into when being examined in detention. In performances, generations of women come together to demand change and support each other with strength and solidarity.

The details might change from place to place, but the spirit remains the same.

The need for an anthem like Un Violador en Tu Camino is no surprise. Few convictions for sexual assault cases in Chile. Horrific rates of violence against women in Mexico. A U.S. president accused by more than 20 women of sexual assault.

The song has been called a “slogan for dignity,” “a battle hymn” and “a war chant.” In fact, it’s all three.

Closer to home, the Women’s Warrior Song rang out in the cold air of Wet’suwet’en territory as RCMP officers closed in to arrest Unist’ot’en matriarchs holding a ceremony to honour the missing and murdered Indigenous women and girls across Canada.

The Women’s Warrior Song is often performed at protests about violence against Indigenous women, but it’s equally applicable to the violence perpetrated against the land. The connection between the two is explicit and well-established not just in Canada, but around the globe.

Argentinian anthropologist Rita Segato, whose theories inspired the creation of the song Un Violador en Tu Camino, invoked a similar connection between sexual violence, economic systems and Indigenous people in her 2016 book La guerra contra las mujeres (The War Against Women). In her early research, Segato interviewed a group of men imprisoned for crimes of sexual violence and developed a theory about how men seek power through the territorial control of the female body.

In a recent an interview with Palabra Publica Journal, Segato said: “Patriarchy as an ideology and relationship structure is the perfect language for the structure of ownership of the planet and the lives of others, which is why the patriarchy is being safeguarded.”

That such ideas have been adapted into a song and dance that can be understood around the world is perhaps one of the most remarkable things to emerge from the phenomena that is Un Violador en Tu Camino.

In the face of rampant horrific destruction, of land and body, we sing.

The act of singing connects people in intangible and often mysterious ways. After a very long apolitical period, music seems to be finding its anger again. Protest songs are ringing out around the globe at the moment.

These social movements are often led by women, but increasingly men are also raising their voices. After a nine-year hiatus, activist rockers Rage Against the Machine announced tour dates for 2020, including a stop in Vancouver. And Killer Mike has lent his support to the Bernie Sanders campaign in the U.S. with cadences that recall not only the incendiary anger of hip-hop, but also the great orators of Black culture like James Baldwin and Martin Luther King Jr.

Even Taylor Swift recently released a protest anthem, albeit a rather pop-light version of anger at injustice. But if it helps someone find their political voice, great.

Faced with injustice, big or small, why do humans burst into song? Every social movement of note — civil rights, anti-war, labour, suffrage, gay rights — has had an anthem or two. 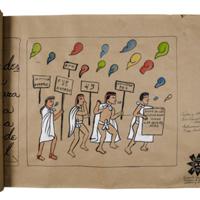 The Angler: Crafting the Art of Resistance

Anger and song can form an incendiary combination. The women dancing and singing in the videos of different performances of Un Violador en Tu Camino (A Rapist in Your Path) don’t look afraid. Pissed off, furious, resolute — all those things, yes, but not afraid.

Watching the video of the song’s performances around the world, one of the most striking things is the image of women coming together. The power of the song isn’t the words or the gestures, but the act of doing it collectively.

It’s the same idea that comes roaring out of Killer Mike’s speech, namely, people acting in concert — women, men, black, white, gay, straight, young, old, all the binaries and divisions that have kept people silent and separate falling away to create a chorus of voices demanding change.

This ferocious defiance, whether it’s a thousand people singing and dancing in the street or a lone woman drumming and raising her voice to the sky, speaks louder than anything.