Every so often, along comes a film that everyone has to have an opinion about. Earlier in the fall it was Joker, and now it’s The Irishman.

In short, the film documents the exploits of a mob hitman named Frank Sheeran (Robert De Niro) who claimed to have played a pivotal role in the death of American union boss Jimmy Hoffa in the 1970s. Sheeran’s story hasn’t been proven, so the notion that the film reveals some truth about the long-missing Hoffa is so much spumoni.

It’s tempting to give a big fat “OK, Boomer” to Scorsese, especially when he lectures about how to view his new film (not on your phone) or goes cranky old man against comic book movies. Scorsese should hardly begrudge other people’s indulgences, since he wallows in his own with squealing abandon.

The Irishman is a case in point. For the poor souls who slogged through Silence, Scorsese’s last outing, the fact that this latest opus is even longer, both in running time (209) minutes and development hell (15 years), will not come as good news.

Still, battalions of critics continue to shout in unison: “Genius!”

It would be easy to take a contrary point of view simply to be difficult, but the film is more complicated and troubling than that.

The usual response when one fails to fall in line with the consensus lauding Scorsese’s genius is “you don’t get it — Scorsese’s not actually glorifying these men; he’s critiquing them.” To which I call a resounding bullshit.

The details of period music and costume — and the production design lavished on the characters and their era — speaks of love and an almost fetishistic attention to the particular glamour of the age. Sharp suits on bad men, big fins on slick cars, and women as lacquered and ornamental as mannequins.

And Scorsese makes a point of indicating how each of the mobsters in the film went out: most gunned down or garroted by their fellow criminals. It’s a throwaway gesture and doesn’t serve to do anything more than bolster the bloody mythology of the mafia.

The lushness of visual detail, operatic in scale, is designed to overwhelm. Add in the film’s monumental running time and quartet of the grand old men of American cinema (De Niro, Pesci, Pacino, Keitel) and, at some point, I think you’re supposed to cry Uncle Marty. Emerging after the press screening I felt as glazed as a sugar donut.

To be fair, there are things to admire in the film, particularly the performances. Although he mostly resembles a melted candle, Joe Pesci as aging crime boss Russell Bufalino is a formidable presence throughout. His measured and quiet show of power easily overwhelms the more mannered and showy renditions of Al Pacino (Hoffa) and De Niro (Sheeran).

Much fuss has been made over the digital de-aging used on its elderly stars, but it has the effect of reducing the actors to waxwork renditions of themselves. Think Madame Tussaud’s mobsters. Stranger still is the decision to digitally replace De Niros’ dark brown eyes with what looks like bits of shiny blue glass. I exaggerate, but not that much.

There are other issues as well.

As many have noted, women in the film are largely irrelevant. The only significant female character is Sheeran’s daughter Peggy, played by Lucy Gallina as a girl and Anna Paquin as an adult. As the supposed moral core of the film, Peggy is given about six lines of dialogue. The rest of the time she has to make do with various stares that are supposed to signal reproach, horror and disgust.

Long before anyone else figures it out, Peggy understands that her father is a monster, and logically she wants nothing to do with him and his mobster cronies. The single moment of direct confrontation between father and daughter in the film barely rises above a whisper. The rest of the women in the story — wives, mothers and girlfriends — are barely indistinguishable. The primal bones of male bonding are much more important and run deeper than anything else.

That’s where, for all its artful construction and attention to detail, The Irishman lost me.

It comes down to the fact that I don’t want to know about these evil old farts anymore, waxing nostalgic about their gory glory days. I don’t feel I owe them any sympathy or understanding. Hasn’t there been enough of film detailing all the sad failings of aging white guys to last us until kingdom come? Clint Eastwood has the made the trope his stock in trade.

For all its purported indictment of mob rule, government collusion and toxic masculinity, a scathing critique it is not. Giving violent brutal men a capacious, extravagant staging invests them a certain romantic grandeur. It’s the nature of the movie screen, larger than life and imbued with the director’s own auteur-driven authority.

One more thing, and then I’ll shut up. 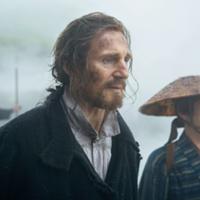 Watching The Irishman during the U.S. impeachment hearings, the two things started to blend into an unholy double-headed hydra. As the GOP closes ranks around their mafia boss president, in full knowledge of the corruption, you have to wonder what exactly is being protected? Honesty, honour, the truth, even reality itself are rescinded in the face of this dog-like obedience.

In light of this reality, it’s hard to watch The Irishman and have any fun. Most of the time, I felt slightly sick. Even more so when people gushed, “I loved it!” What did you love, exactly? Moral vacuity, the abyss in the centre of American society, people murdering other people as a display of male loyalty, or, more correctly, fealty?

Frank Sheeran’s empty, brutal life isn’t the worst part of The Irishman; rather it’s the adherence to a rotten system of power and complicity, all predicated on men dutifully obeying other men. Except Sheeran’s loyalty isn’t blind: it’s informed, cognizant, and still obedient.

For me, the decisive end to the argument that Scorsese films don’t glorify their subjects, no matter how loathsome they might be, came at the end of another male-bonding movie, when the real Jordan Belfort made a cameo appearance alongside his movie star simulacra in The Wolf of Wall Street.

His gleeful, shit-eating grin told you everything you need to know. There’s no regret, no shame: just the boyish joy of being one of the gang.