Thomas Piketty’s new book Capital and Ideology won’t be available in English until next March. At 1,150 pages, it will likely be more bought than read. But some of its ideas are already causing a stir, and one insight in particular could explain how the Canadian election will go.

In a 180-page report published in March 2018, Piketty documented a remarkable shift in the political “cleavages” of Britain, France, and the U.S. Those cleavages certainly apply to Canada and other nations as well.

“In the 1950s-1960s,” Piketty writes, “the vote for ‘left-wing’ (socialist-labour-democratic) parties was associated with lower education and lower income voters. This corresponds to what one might label a ‘class-based’ party system: lower class voters from the different dimensions (lower education voters, lower income voters, etc.) tend to vote for the same party or coalition, while upper and middle class voters from the different dimensions tend to vote for the other party or coalition.”

Having won the Second World War, the U.S. and its allies designed an economic system that would reward workers with job stability and relatively high income. This was not out of the goodness of their hearts; the late British historian Tony Judt argued that Western governments had seen workers turn communist after the First World War, while the middle classes turned fascist. They forestalled a repeat by imposing various forms of social democracy on themselves: health care, respect for unions, greater access to education, high tax rates on the wealthy.

As Piketty shows, this policy succeeded better than the governments ever dreamed. A single worker (if white, male, and unionized) could support a wife, bring up a lot of kids, and send them to college or university. The promise of true social mobility was not only real but soon taken for granted. As a war baby born in 1941, I greatly benefited; so did the early Baby Boomers, those born roughly 1945-55.

End of the golden age

But by the mid-1970s, the egalitarian golden age was coming to a close. Young professionals were established in their careers, but opportunities were fewer for those coming after them. Fed by numerous new think tanks like the Institute for Economic Affairs and the Fraser Institute, the media began to question social democracy and the “featherbedding” unions it encouraged. Government budgets were tightening for health and education.

The socially mobile young professionals might still vote Democratic or Labour or NDP, as their parents had, but they weren’t workers any more. As teachers and administrators, they were guiding the next generation on the same path out of the working class, but to less predictable success and more predictable student debt. Multiple degrees were now needed just to get a job interview, never mind a job.

“Since the 1970s-1980s,” Piketty argues, “‘left-wing’ vote has gradually become associated with higher education voters, giving rise to what I propose to label a ‘multiple-elite’ party system in the 2000s-2010s: high-education elites now vote for the ‘left,’ while high-income/high-wealth elites still vote for the ‘right’ (though less and less so). I.e. the ‘left’ has become the party of the intellectual elite (Brahmin left), while the ‘right’ can be viewed as the party of the business elite (Merchant right).” 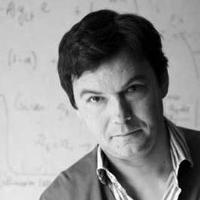 On Capitalism, We Are All Pikettists Now

The young professionals, like their worker parents, were bewildered by this change. They didn’t yet realize they’d become an elite with different interests than those of their unionized parents. Here in B.C., the social democracy of Dave Barrett’s worker-built NDP in the early 1970s was supplanted by the Merchant-right government of Bill Bennett’s Socreds and their “restraint.” By the 1990s when the NDP returned to power, the young professionals were in charge and they were half-sold on think tank neoliberalism. Not that it did them any good: Gordon Campbell’s Liberals finished off social democracy in B.C. for a generation.

To cut to the proverbial chase: the Brahmin left met its comeuppance in 2016 with the election of Donald Trump and his appeal to the people they had abandoned.

“I love the poorly educated!” Trump told his fans, and they cheered while the Brahmins clutched their proverbial pearls. The world had seen a glimpse of this new working class when Barack Obama was overheard in 2008 telling supporters: “they get bitter, they cling to guns or religion or antipathy to people who aren’t like them or anti-immigrant sentiment or anti-trade sentiment as a way to explain their frustrations.” But Obama won, twice, and the Brahmins forgot about the poorly educated. Until Hillary Clinton dismissed them as “deplorables” and they took their revenge.

Piketty says he is “trying to relate the rise of ‘populism’ to what one might call the rise of ‘elitism,’ i.e. the gradual emergence (both in Europe and in the U.S.) of a ‘multiple-elite’ party system, whereby each of the two governing coalitions alternating in power tends to reflect the views and interests of a different elite (intellectual elite vs. business elite).”

Here in Canada, populism has splintered off into Maxime Bernier’s People’s Party and some parts of Andrew Scheer’s Conservatives. Canadian workers may not be quite as obsessed with guns and religion, but they may well be skeptical about immigration and free trade. The Merchant right is split between the Conservatives and the Liberal right; the Brahmin left is split between the NDP and the Liberal left.

Many Brahmins fear the populist right more than they love their own traditional advocates in the NDP and the Greens: better to vote strategically for the cute guy who kicked out Harper and supports “the middle class and those working hard to join it” than to risk Harper Jr. in power.

If Thomas Piketty is right in his analysis, the Brahmin left has a lot of explaining to do to itself. “In effect,” he says, “globalization and educational expansion have created new dimensions of inequality and conflict, leading to the weakening of previous class-based redistributive coalitions and the gradual development of new cleavages.”

One likely outcome could be a merger of Brahmins and Merchants, and the rise of a new labour party altogether: one speaking for recent immigrants, unorganized workers, Indigenous peoples and other impoverished and vulnerable minorities.

Or the Brahmin left, confronting its own cleavages as well as an impending climate crisis, could sit down with the workers it left behind, listen closely to them, and develop new programs that offer us all a fighting chance to get through the disastrous decades to come.