It might not be immediately obvious, but a new film about William Lyon Mackenzie King is the timeliest thing you’ll see at the Vancouver International Film Festival this year.

As we barrel towards the 2019 Canadian federal election, a glimpse into the debasement of a national icon is perhaps an appropriate reminder of Canada’s dual role on the world stage — simultaneously boastful exemplar and timid underdog.

In the film, King undertakes a number of absurd feats, including competitive waiting, baby seal clubbing and writing one’s name in the snow with pee to earn his spot as the longest serving prime minister in Canadian history.

The surreal humour that runs throughout The Twentieth Century calls to mind elements of German expressionism, Soviet propaganda and Canada’s own Heritage Minutes.

The frequent nods to Heritage Minutes don’t come out of nowhere. Rankin, who was trained as a historian, actually pitched a number of genuine Heritage Minutes projects. “They very wisely rejected all of them,” he said, though his philosophy regarding the one-minute celebrations of iconic Canadian events is an interesting and challenging one.

Instead of glorifying King, Rankin presents him as a flawed human being, whose sexual obsession with women’s footwear and masturbatory habits made him a tragically comic figure. In this fashion, he is part of a long tradition of hopeless Canadian losers, best exemplified in Don Shebib’s iconic Canadian film Goin’ Down the Road.

Comparisons to fellow Winnipegger Guy Maddin are obvious, albeit a little on the nose. Like Maddin’s celebrated film My Winnipeg, The Twentieth Century also offers a fun-house mirror version of Canadian history.

What we see depicted shouldn’t be taken as literal fact, but neither is it entirely fictional. The director did extensive research into the history of King, including reading the late prime minister’s diaries.

But Rankin’s exhaustive process didn’t preclude creative interjections finding their way into the film. The filmmaker recounts that he frequently fell asleep while reading and couldn’t always remember what he’d dreamt and what he genuinely learned from his reading.

“I let my dreams infect my thinking, and at a certain point I stopped doing historical research,” says Rankin. “I just started brazenly embellishing and driving Mackenzie King deep into abstraction. [The Twentieth Century] does reprocess history in a way that our dreams do. It was an imaginative response to the history in an effort to make nonetheless a historical argument.”

While Rankin injected reality into his “nightmarishly Canadian maximalist” vision, his own inventions somehow managed to seep back out into reality. There is strange resonance between The Twentieth Century and our current political climate, as Canada approaches the prospect of choosing a new prime minister.

Watching King stumble, flail and lose his way again and again is like we’re seeing a vision of history repeating itself. Liberal leader Justin Trudeau’s campaign has felt like a similar series of mishaps, including his apology about donning brownface and blackface whenever possible.

Meanwhile, Conservative party Leader Andrew Scheer is playing a game of moral gymnastics, standing by party members who’ve made racist and homophobic statements in the past. As long as they apologize it’s all good, according to Scheer, even as he refuses to accept Trudeau’s apologies.

Then there are silly scandals, epitomized by the revelation that the Green party photoshopped a reusable cup and metal straw into party leader Elizabeth May’s hand in a campaign photo.

“We are entering a very binary era in politics, where we are constantly radicalizing into fanaticisms, and the elastic is beginning to reach its snapping point,” says Rankin, recognizing a timeliness in his film. “This movie is sort of exploring, from a lot of different angles, this idea of the centre,” he adds, noting a certain wisdom in finding common ground. 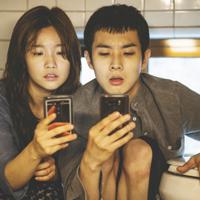 “But then there’s another centre that is all about protecting one’s own power, and the thing about Mackenzie King is that a lot of times in his career, in history, he had to choose between... leading on what he knew to be right, or protecting his power and being safe — and in fact doing what he knew to be wrong — in order to protect his power,” he adds. “And whenever he was confronted with a situation like that, he always chose to protect his power. And I think that that’s the tyranny of the centre.”

A national origin story steeped in fiction, focused on the lies we tell ourselves as a nation and the power our leaders desperately cling to for its own sake? Sounds like the best Heritage Minutes episode we never had.

The Twentieth Century premiered at the Toronto International Film Festival earlier this month, where it won the Best Canadian First Feature award. It will screen at VIFF on Sept. 28 and 30. For more information, visit the VIFF website.